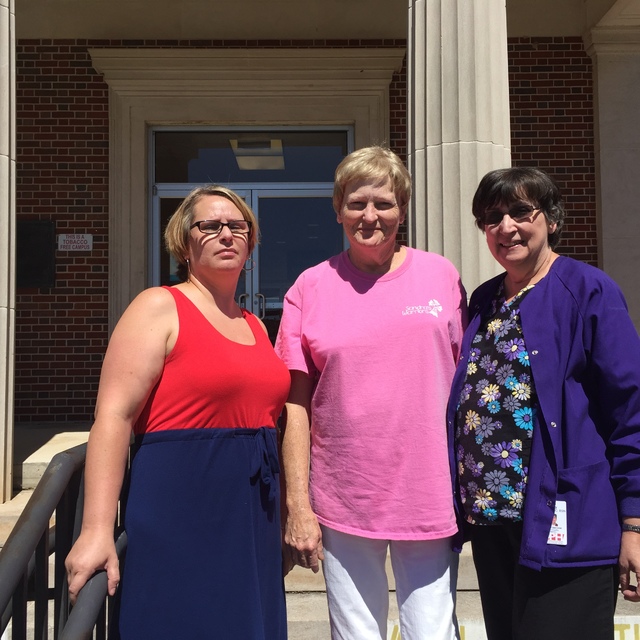 Sandra Spradlin, center, stands with healthcare professionals Michele Davis, left, and Becky Lewis at the Troup County Health Department. Spradlin was diagnosed with breast cancer in March and is undergoing treatment. She said raising money and supporting the Sept. 26 HOPE Walk and Paint the Town Pink has helped her morale.

http://lagrangenews.com/wp-content/uploads/sites/37/2015/09/web1_WEB091515Spradlinprofile.jpgSandra Spradlin, center, stands with healthcare professionals Michele Davis, left, and Becky Lewis at the Troup County Health Department. Spradlin was diagnosed with breast cancer in March and is undergoing treatment. She said raising money and supporting the Sept. 26 HOPE Walk and Paint the Town Pink has helped her morale.

LaGRANGE — When Sandra Gail Spradlin talks about the day she was diagnosed with breast cancer, her voice cracks and tears well in her eyes before she can fight back the emotion. But she keeps talking about the obviously difficult topic.

Spradlin was diagnosed with breast cancer in March. She felt a lump and the fear rushed in.

“It was about as big as a nickel,” she said about the knot.

Without health insurance, she wasn’t sure what her next course of action would be.

After waiting about three weeks to make sure the knot wasn’t a cyst, Spradlin found herself at the Troup County Health Department taking the first steps in the fight against breast cancer.

She underwent a clinical breast exam at the department. Afterward, health professionals scheduled Spradlin appointments at the Women’s Health Center for a biopsy. When the biopsy results came back positive for cancer, the health department helped Spradlin get the proper insurance.

“I couldn’t have done it without them,” she said.

Professionals at the health department sent Spradlin to the Women’s Center to have a mammogram. It had been over 30 years since her last mammogram.

“The last time that I took one it hurt real bad, and then I didn’t have the insurance,” she said of her previous mammogram experience. “You were smashed; the ordeal was very uncomfortable. Everyone should do it a lot sooner. … It doesn’t hurt now.”

Spradlin said her doctors hoped a mastectomy would prevent having to undergo chemotherapy, but after the surgery doctors discovered the cancer had moved into her lymph nodes. The chemotherapy, and eventually radiation treatment, would be unavoidable.

“It’s so scary,” Spradlin said of having cancer. “You don’t think it will happen to you, and then it does and everything just happens so fast. … You’re going through the treatment, and you just have to have your mindset that it’s going to be all right; otherwise, it will drive you crazy. … After you take chemo you have days that you are just so weak that it’s hard to do anything but lay around, and then you’re about to get feeling better when it’s time to do it again.”

Spradlin said she went in for chemotherapy every three weeks. She completed her treatments and is about to start radiation treatment.

Throughout her battle with cancer, Spradlin had many different support systems. One of her biggest supports has been her faith.

“I have faith in God that it’s going to be fine. … He said that it would be, and I believe him.”

Members of her church at Turnaround Christian Center have been supportive as well. A group was created called “Sandra’s Warriors,” which has helped raise money and made shirts.

Since the diagnosis, Spradlin hasn’t been able to work. She was a caregiver for the elderly.

Also, groups at the Women’s Center and community events have been support outlets for Spradlin.

Hope and support are important parts in the fight against breast cancer, she said.

“Some of (the people diagnosed with cancer) give up because it is hard to go through. … The friends that I have made — oh my goodness — I have come in contact with so many people who have had breast cancer, and they’ve been so nice to me and talked with me.”

One event Spradlin has been involved with is the Sept. 26 annual HOPE for a Day Walk and Paint the Town Pink. She has been raising money for the event and making plans to attend. Spradlin said events like these help her morale.

Spradlin also said her 15-year-old daughter, Sandy Hope Bailey, and 36-year-old son, Joshua Spradlin, keep her busy and focused on aspects of life other than the cancer.

“When you first get the news and everything hits you, but you just have to put it into perspective. That’s all you can do, and that’s hard to do. You’ve got to think of your family. My daughter — you don’t want to make her scared, but you want to tell her the truth.”

Her son is recently engaged and her daughter is a cast member in an upcoming Troup High School play. Spradlin wants to see her son marry and her daughter graduate, along with many other life events.

One piece of advice Spradlin wants to give other women is not to be afraid of getting a mammogram.

“Nowadays, it’s nothing,” she said.

Spradlin emphasized that the new method of having a mammogram isn’t as painful as it once was.

Spradlin said that the exam no longer “smashes” like it used to.

Health Department professionals said women should have a mammogram every year after the age of 50 and begin having mammograms around the age of 35. They also advised women to perform a self-exam on the eighth of every month.