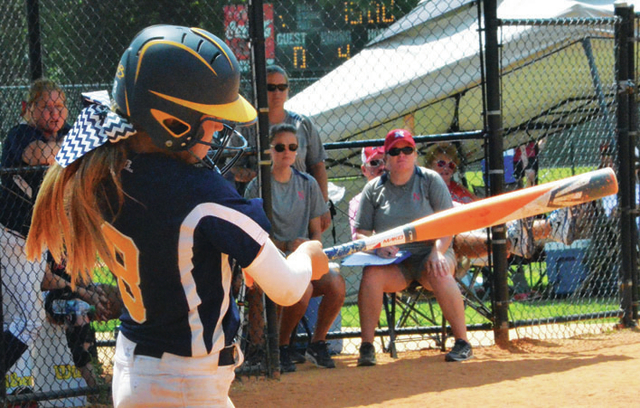 Troup’s Libby Wheeler had a home run during a victory over Chattooga during the Trojan Slam over the weekend. Kevin Eckleberry | Daily News

http://lagrangenews.com/wp-content/uploads/sites/37/2015/09/web1_9-15-troup-wheeler.jpgTroup’s Libby Wheeler had a home run during a victory over Chattooga during the Trojan Slam over the weekend. Kevin Eckleberry | Daily News They got their swings in.

The LaGrange and Troup softball teams both participated in the Trojan Slam in Carrollton over the weekend, and they played a combined 10 games.

It was a tough weekend for LaGrange, which came up short in each of its five games, while Troup went 2-3.

Troup played twice on Friday, and it beat Paulding County 8-2 and lost to Chapel Hill 10-2.

In the win over Commerce, freshman Kayla Lane hit her first home run as a high-school player, and she finished with three hits and three RBIs.

Amber Arnold and Maddie Weathers each had a double and an RBI in the Commerce game.

In the Chattooga game, Hanna Lane had three hits with three runs scored and an RBI, and Libby Wheeler had a solo home run.

McCartney drove in two runs, and Kayla Lane had one RBI.

In the loss to Hillgrove, Kinley Stanford had a hit and an RBI, and Wheeler drove in a run.

In Friday’s win over Paulding County, the Lady Tigers managed to score eight runs despite getting just three hits.

Troup’s batters showed a lot of patience and worked their way on base with eight walks, with Wheeler reaching on three of those walks, and she scored two runs.

Stanford had a hit and two RBIs, and Kayla Lane had two hits and three runs scored.

In the loss to Chapel Hill, Stanford had Troup’s lone RBI, and Weathers and Kayla Lane scored the two runs.

LaGrange had a difficult time of it in the tournament.

In its games on Friday, LaGrange lost to Alexander 12-0 and Chattooga 15-0.

LaGrange was more competitive in its three games on Saturday.

After beginning the day with a 10-2 loss to Commerce, LaGrange hung tough with a strong Carrollton team before losing 11-7.

In its final game, LaGrange fell to Paulding County 8-4.

It was a hard-fought match that went the distance, and Lafayette Christian ended up winning the fifth and deciding set.

Lafayette Christian lost two of the first three sets, but it won the final two to capture the home win over a team it could end up playing in the state playoffs.

Trailing two sets to one, Lafayette Christian coach Rene Gomez said he told the girls “we’ve got to show some fight,” and they responded with a strong closing effort.

The final set was tied at 14-14 when a Skipstone player had a service error, setting up match point.

Jenna Vedrenne, who is on track to set a school single-season records for aces, finished with an ace to give her team the victory.

Vedrenne had a big game with 10 kills and eight aces, and Beth Ann Wyzykowski also had 10 kills.

Gomez said Wyzykowski and Roni Bowman “had about 16 assists between them.”

“They really anchored our defense and made big plays,” Gomez said.

Hudson, a sophomore, had eight digs.

“For a sophomore to come in and really anchor that defense, she did an excellent job,” Gomez said.

OF NOTE: To provide information for the high-school roundup, please email lagrangesports@yahoo.com