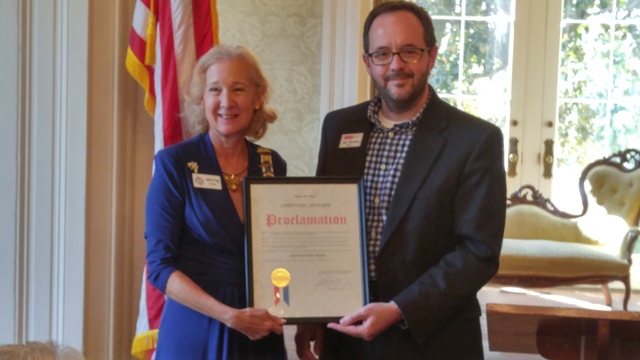 Kathren Fogg, leader of the local chapter of the Daughters of the American Revolution, and LaGrange Mayor Jim Thornton hold a document proclaiming today through Wednesday as Constitution Week in the city. The proclamation is part of a national week to reflect on the importance of the U.S. Constitution.

http://lagrangenews.com/wp-content/uploads/sites/37/2015/09/web1_Proclamation.jpgKathren Fogg, leader of the local chapter of the Daughters of the American Revolution, and LaGrange Mayor Jim Thornton hold a document proclaiming today through Wednesday as Constitution Week in the city. The proclamation is part of a national week to reflect on the importance of the U.S. Constitution.

LaGRANGE — A local civic organization and the city’s mayor are asking area residents to take a moment to reflect this week on the importance of the United States Constitution.

The LaGrange Chapter of the Daughters of the American Revolution successfully petitioned Mayor Jim Thornton to proclaim today through Wednesday as Constitution Week in conjunction with a national reflection.

“I think it’s very important for all citizens to periodically reflect on the importance of the Constitution and the 228 year period our county has been governed by it,” said Thornton.

Since 1955, the DAR has petitioned Congress to set aside Sept. 17 through 23 annually to be dedicated for the observance of Constitution Week. The resolution was later adopted by Congress and signed into public law on August 2, 1956, by President Dwight D. Eisenhower, according to the DAR’s website.

Kathren Fogg, head of the local DAR chapter, said she hopes the local proclamation will encourage people to stop and take a moment this week to read the Constitution.

“It’s a symbol of our freedom,” Fogg said. “We (the DAR) are in the business of educating people about patriotic events and documents. That’s what the DAR is all about. We’re a patriotic organization that encourages education and historic preservation in communities across the country. For us, (the Constitution) is our main symbol of freedom, and we don’t want that to get lost — we want it to continue to be studied.”

Although the DAR is committed to encouraging people — young and old — to take a closer look at the Constitution, that’s not the only thing the organization does.

Right now, the organization is working to raise funds for veterans as part of its regular service to the community. The group also visits veterans in nursing homes to keep their spirits up.

“We provide clothing articles and food to veterans,” Fogg said. “We have vets around town in nursing homes, and we take them goodie bags, things like cards and mementos and such.”

The group also helps young people apply for national DAR scholarships, Fogg said. Additionally, the members help people research their family genealogy. Having an ancestor who served in one form or another is a prerequisite for joining the DAR.

“We have revolutionary service members in our lineage,” Fogg said. “Both men and women — sometimes it was people who provided food for the soldiers, or clothing and blankets. There were a lot of different ways to serve. If they were documented as having served the revolutionary cause, then they can be admitted into the society.”

Fogg said one of her ancestors, John Winston, had a revolutionary regiment in North Carolina that successfully spooked British General Charles Cornwallis at Kings Mountain in North Carolina.

“They helped to kind of surround them and frighten them away,” Fogg said.

Later, on Oct. 19, 1781, Cornwallis surrendered 8,000 British soldiers to the French and American armies at Yorktown, Virginia, helping to bring an end to the American Revolution.

For more information about the Daughters of the American Revolution, or Constitution Week, visit www.DAR.org.