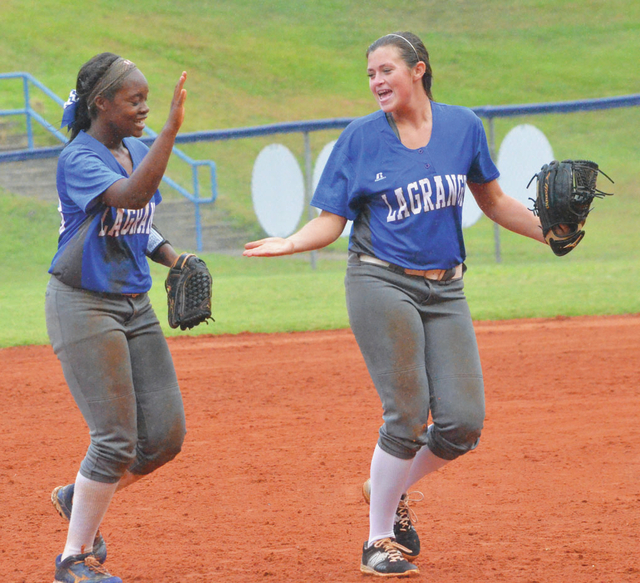 LAGRANGE – They were right there.

Facing a strong Carrollton softball team on Wednesday at home, the LaGrange Lady Grangers pushed a pair of runs across in the bottom of the sixth inning to get within one.

Unfortunately for the home-standing Lady Grangers, they were unable to pull even, and the Lady Trojans walked away with a hard-earned 3-2 victory in the non-region game.

It was an encouraging effort for a LaGrange team that has struggled of late.

“We got better today. We did,” LaGrange head coach Dewey Lee said. “If you have a chance to win it in the last inning, you’ll take that.”

McLain Skinner went the distance on the mound for LaGrange, and she did a terrific job slowing down a potent Carrollton offense.

LaGrange’s defense, which has struggled at times, was sharp against Carrollton.

“I think maybe all of (the runs) were earned, which is a big step for us,” said Skinner, who has done the bulk of the pitching for LaGrange this season. “We’ve been giving up a bunch of unearned runs.”

In the top of the sixth inning, Carrollton scored two runs, and while there were no errors in the inning, there were some defensive plays that could have been made but weren’t.

Skinner and the defense buckled down and limited the damage, though.

“It wasn’t three errors in a row that let the floodgates open. They got out of it,” Lee said. “They played well. I was proud of them today.”

After Carrollton scored twice in the top of the sixth, LaGrange came right back with two runs in the bottom of the inning.

Lauren Kuerzi led off with a base hit and Destiny Fitzpatrick walked, and after both players moved up on stolen bases, Kuerzi scored on a wild pitch to get LaGrange on the board.

Leighton Parker then came through with an RBI single to trim the deficit to one, but Carrollton was able to get out of the inning with no more runs scoring.

Skinner pitched a perfect top of the seventh and struck out the final two batters she faced, but LaGrange was unable to get anything going in its final at-bat.

LaGrange will put its 3-3 Region 1-AAAAA on the line when it visits Northside today.

“This gives me hope for tomorrow,” Lee said, reflecting on the performance against Carrollton. “That (Northside) team is a lot like this team right here.”