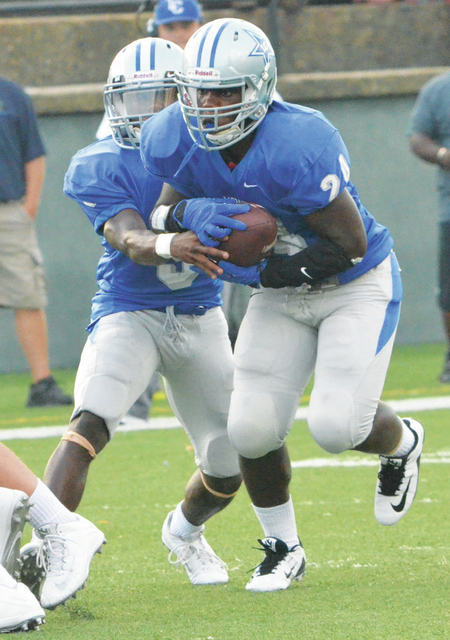 LaGrange’s Amad Ogletree, a quarterback a year ago, is excelling as a running back this season. Kevin Eckleberry | Daily News

http://lagrangenews.com/wp-content/uploads/sites/37/2015/09/web1_9-17-ogletree21.jpgLaGrange’s Amad Ogletree, a quarterback a year ago, is excelling as a running back this season. Kevin Eckleberry | Daily News LaGrange’s Kimani Barnes has provided a strong presence at running back this season, although he was unable to play in the Spalding County game because of an injury. Kevin Eckleberry | Daily News

http://lagrangenews.com/wp-content/uploads/sites/37/2015/09/web1_9-17-barnes1.jpgLaGrange’s Kimani Barnes has provided a strong presence at running back this season, although he was unable to play in the Spalding County game because of an injury. Kevin Eckleberry | Daily News

LAGRANGE – He just wants to contribute.

During the 2014 season, Amad Ogletree was LaGrange High’s starting quarterback, and he did a nice job and helped lead the team to a third-place finish in the region and a spot in the state playoffs.

In the weeks and months leading up to the current season, Ogletree and LaPerion Perry were vying to be the Grangers’ quarterback, and they both received significant playing time in a preseason game against Newnan.

After Perry led the Grangers to a pair of touchdowns against Newnan, the decision was made that he was going to be the starting quarterback for the season opener against Callaway.

Ogletree was given a new role, and it’s one he has embraced.

Ogletree, who was a running back before making the shift to quarterback, was going to return to his former position.

“When I played quarterback, I liked it,” Ogletree said at the close of Wednesday’s rain-soaked practice session. “But I’d always been a running back. I was ready to go back to that.”

While Perry has settled nicely into his new role and has been a dynamic play-maker, Ogletree has been a focal point of the offensive attack from his running-back position.

Ogletree had touchdown runs in each of the first two games against Callaway and Troup, and he has been one of the team’s leading rushers through the first three games, and he has also been a factor in the passing game.

Ogletree said he and Perry have been working great together this season.

“I remember last year some of the situations I was in would come up this year, and I’ll try to talk to him on the field, tell him to go through your progression, and know you’ve got me to check down to,” Ogletree said. “It’s just good team work.”

Ogltree added that “I’m happy to be playing (running back), I really am. It’s a great feeling to be running again.”

Ogletree has been a part of a capable group of running backs that includes fellow seniors Kimani Barnes and Jeremiah Wright, although Barnes was unable to play in the most recent game against Spalding County because of an injury.

Another senior running back, Undriel Copeland, hasn’t played yet this season, and he’ll add depth to that position when he returns.

No matter how many talented running backs the team has, Ogletree will continue to be a critical part of the offense.

Ogletree has the speed to out-run opposing defenders as he has done often this season, but he also has no qualms about putting his helmet down and running over would-be tacklers.

“I run rough, but I only try to truck people when I absolutely have to,” Ogletree said. “The main thing is to protect the ball and pick up yards.”

Ogletree said he and the other running backs have been successful in large part because of an offensive line that has been getting the job done, even without the presence of all-state player Luke Elder, who is recovering from knee surgery and hasn’t played yet.

“They’ve been blocking real good,” Ogletree said. “I can’t imagine what it’ll be like if we get Luke back.”

LaGrange is coming off its first loss of the season.

After the wins over Callaway and Troup, LaGrange lost to Spalding County 20-9 after getting outscored 10-0 in the second half.

After a week off, LaGrange (2-1) will return to the field on Friday for a road game against an unbeaten Mary Persons (3-0) team that beat Lamar County 20-7 last week.

A year ago, Mary Persons pulled away in the second half to beat LaGrange 24-6.

“I’m really ready to play them,” Ogletree said. “Last year, we stuck with them in the second half, so I feel like we’ve got a chance.”

LaGrange will be rested.

After four consecutive weeks of playing games, the Grangers were off last week, and Burks is hopeful they’ll be refreshed physically and mentally when they hit the field Friday night.

“We’ve had a good week and a half, two weeks of practice,” Burks said. “We got healthy. We just took time off to get our mental ability back. It wasn’t so much physical. I think they’ve proven they can go out and do it physically. We took some time off for them and us to prepare, and we’re excited where we are right now.”