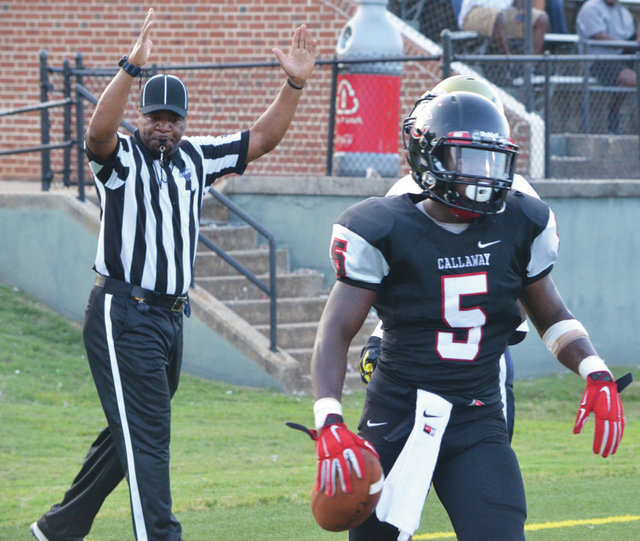 Running back Cedric Maynard and the Callaway Cavaliers are hoping to celebrate some touchdowns against Harris County tonight. Kevin Eckleberry | Daily News

http://lagrangenews.com/wp-content/uploads/sites/37/2015/09/web1_9-17-callaway2.jpgRunning back Cedric Maynard and the Callaway Cavaliers are hoping to celebrate some touchdowns against Harris County tonight. Kevin Eckleberry | Daily News

HOGANSVILLE – Harris County has had Callaway’s number the past two years.

Callaway will try to turn the tables on Harris County when those two teams face off at Callaway Stadium today, with kickoff set for 7 p.m.

Callaway, which was off last week, brings a 2-1 record into the game, while Harris County is 1-2 after getting a breakthrough win against Troup last week.

Harris County, which has enjoyed tremendous success the past few seasons, is under the direction of first-year head coach Dwight Jones, who took over for Tommy Parks after he left to take over the Upson-Lee football program.

“Coach Jones does a great job,” Wiggins said. “He’s old school. He brings a lot of discipline and physicality to his team. They’ll be fundamentally sound, and they’ll play hard, and they’ve got a lot of depth. It’ll be a tough opponent for us.”

Jones took over a team that had won 26 games the previous three seasons while capturing a pair of region championships and making it to the state quarterfinals once.

In fact only six starters from last year’s team returned, although the team has received a lift from the presence of running back Darius Blackmon, who ran for more than 1,000 yards at Hardaway last season.

All of the players have had to adjust to a different coaching staff as well as new offensive and defensive systems.

The results were shaky to start with.

Harris County opened with a 45-6 loss to Central-Phenix City before falling to Westside-Macon 30-10 the following week.

Last week against Troup, Harris County gave up an early touchdown to fall behind, but it ended up winning the game comfortably.

Callaway, meanwhile, has won two in a row since losing its season opener to LaGrange 45-20.

After forcing a fumble late in the first half, Callaway drove more than 90 yards for a touchdown, with quarterback Braylon Sanders finishing things off with a 3-yard scoring run.

In the fourth quarter, Devin Brock came through with two big interceptions, and the Cavaliers got a touchdown run from Cedric Maynard and a scoring pass from Sanders to JT Wortham to pull off the come-from-behind win.

Callaway didn’t play last week, and Wiggins said the time off was helpful.

“The off week came at a good time,” Wiggins said. “We did have a lot of bumps and bruises, and we do have some major injuries. That comes with it, and you just have to keep working, and get ready for game day.”

Callaway will play Troup next week before taking another week off leading up to the start of Region 5-AAA play against Cedartown on Oct. 8.