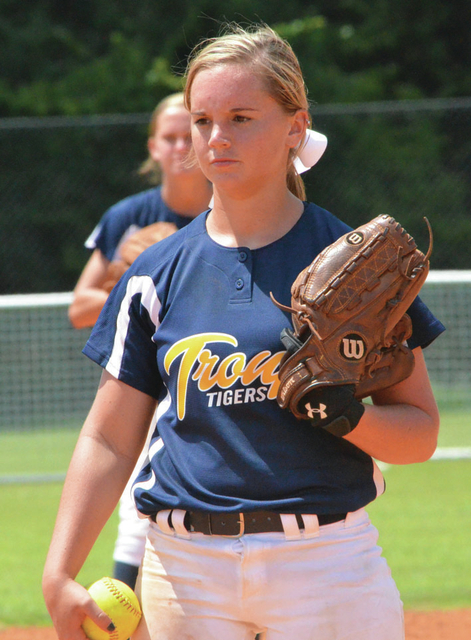 Despite a four-hit performance by Hanna Lane that included a home run, the Troup Lady Tigers were unable to complete a regular-season sweep of Woodward Academy.

Earlier this season, Troup got a big home win over Woodward Academy, and those two region foes met again on Thursday.

This time, it was Woodward Academy winning a slug-fest 8-7 on its home field.

Lane, a senior, had a big day at the plate by going 4-for-4 with a double, a home run and two RBIs, and she also scored two runs.

Another senior, Amber Arnold, was 3-for-4 with a double and two runs scored, and senior Libby Wheeler was 2-for-3.

Kinley Stanford added a hit and an RBI, and Andrea Nix had a hit.

Troup was playing short-handed with two of its top players, Abby Taylor and catcher Maddie Weathers, out with injuries.

Facing homestanding Cedartown on Thursday, Callaway was unable to get a whole lot going at the plate on the way to a 5-0 loss.

Callaway is now 0-7 in Region 5-AAA, and it lost both regular-season meetings against Cedartown.

“Cedartown was tough and their pitcher is really good,” Callaway head coach Ashley Summerlin said. “We competed. We just couldn’t get a big hit. We just have to keep plugging away.”

LAGRANGE: The Lady Grangers scored first in Thursday’s game against Northside, but their 1-0 lead was short-lived.

In the bottom of the first inning, Northside took advantage of some LaGrange defensive miscues and scored seven runs, and it ended up winning 10-1 in a game shortened to five innings because of the run rule.

VOLLEYBALL: Lafayette Christian completed a busy week with a tough loss to Ballard on Thursday.

The Lady Cougars played three matches this week, and all three of them went the full five games.

After winning the first two matches of the week, Lafayette Christian fell short on Thursday.

“We just had a bunch of offensive mistakes,” said Lafayette Christian head coach Rene Gomez, pointing out the 26 unforced errors the team made. “Offensively, we just weren’t sharp.”

Beth Ann Wyzykowski led Lafayette Christian with 10 kills, and Christine Vedrenne had some big aces, including two in a row to end the second game.