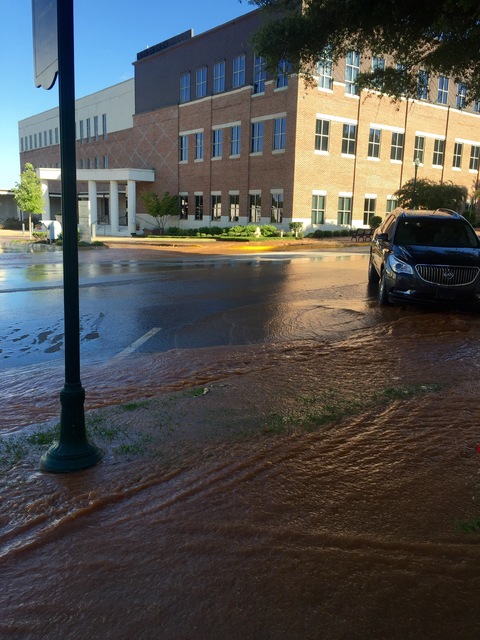 Water rushes down Ridley Avenue on Thursday afternoon following a water main failure and pipe bursting. The water flow washed out base materials under the road and sidewalk, which will necessitate digging up the area, repacking the base and resurfacing the road.

http://lagrangenews.com/wp-content/uploads/sites/37/2015/09/web1_WEB0918Leak.jpegWater rushes down Ridley Avenue on Thursday afternoon following a water main failure and pipe bursting. The water flow washed out base materials under the road and sidewalk, which will necessitate digging up the area, repacking the base and resurfacing the road.

LaGRANGE — A portion of Ridley Avenue will be blocked for about a week after a water pipe burst at Lafayette Square on Thursday afternoon, damaging the roads and sidewalk.

The street was blocked off Thursday after water flooded the area at about 5 p.m., snarling rush-hour traffic. City Manager Tom Hall said this morning that Ridley Avenue will be open to one lane of traffic until repairs are complete, which he hoped would be in a week.

He added that there would be no need for customers to boil their water and all should have water service.

The break and ensuing rush of water buckled the street and was caused by the failure of a section of a 12-inch water main running north to south along Ridley, Hall said.

“It’s an older pipe, in fact it’s under the old cobblestones that the streets were constructed of many years ago,” he told the Daily News.

The old cobblestone roads were paved over about 50 years ago, Hall estimated, and still is underneath the asphalt of the current streets. The cobblestone amplified the damage, because it temporarily trapped the water flowing underneath it, which washed out an area of the base dirt and gravel that maintains the structure of the street and sidewalk.

“It’s a substantial repair job to the streets and sidewalks, which we’re doing right now,” Hall said. “We have a contractor with a milling machine in town right now and we’re working with them to get this on their list while they’re in town. What that does is it saves us time, because they’re already in LaGrange working on Highland (Avenue) for a resurfacing project.”

Hall said it was too early to estimate the cost to repair the damage, but said the city has funds set aside for these kinds of situations. The city also could use special-purpose, local-option sales tax, or SPLOST, funds for the actual road resurfacing.