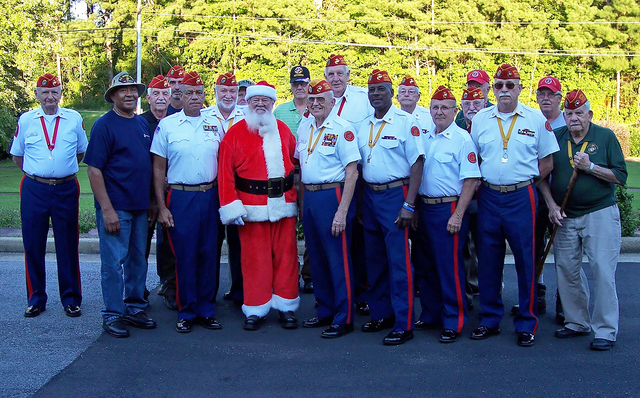 Veteran Bernard Bledsoe stands with Santa Claus. Bledsoe has been chosen as this year’s grand marshal for the 39th annual LaGrange Christmas Parade on Dec. 3.

http://lagrangenews.com/wp-content/uploads/sites/37/2015/09/web1_WEB0918Bernard1.jpgVeteran Bernard Bledsoe stands with Santa Claus. Bledsoe has been chosen as this year’s grand marshal for the 39th annual LaGrange Christmas Parade on Dec. 3. LaGRANGE — Instead of the traditional red, white and green, look for more red, white and blue in the 39th annual LaGrange Christmas Parade on Dec. 3. The theme for this year’s parade will be “Star Spangled Christmas,” and Bernard Bledsoe will be honored as grand marshal.

Bledsoe, who is retired from Milliken & Company, serves with the Marine Corps League and is a longtime supporter of Toys for Tots. He will lead off the parade at 6 p.m. on Dec. 3, after Bledsoe and his family light the giant Christmas tree on Lafayette Plaza with Mayor Jim Thornton.

The parade is organized by the LaGrange-Troup County Chamber of Commerce, and volunteers from West Georgia Health will once again act as “parade elves” during the event.

For the second year in a row, the Budweiser Clydesdales will appear in the parade.

Parade participants will be asked to contribute an unwrapped Christmas toy in addition to the $35 registration fee. All toys will be given to local agencies to help make the holidays extra special for those in need.

For more information, contact the LaGrange-Troup County Chamber of Commerce at 706-884-8671 or letisha@lagrangechamber.com.