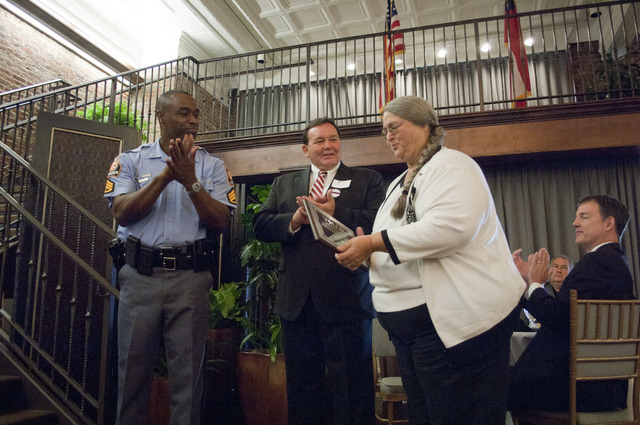 LaGRANGE — The director of the Troup County 911 Communications Center was honored Tuesday during the LaGrange-Troup County Chamber of Commerce Valor Awards for her 40 years of service to the people of Troup County.

Suzy Noles, who began working as a dispatcher at the LaGrange Police Department in 1975, will retire in October. The chamber presented her with the Communications Person of the Year Award for her decades of commitment.

Noles has “always been a voice of calm during emergency situations,” said Libby Willingham, chamber chairperson. “She often spends extra hours at the 911 Center to cover shifts and respond to incidents.”

On April 28, 2014, Noles was at work when a severe weather system moved into northern Troup County and formed a tornado. She activated the CodeRed notification system and watched as the radar showed the storm moving in directly over her own home — but she didn’t abandon her post and stayed at the 911 center fielding calls and directing emergency responders.

When she returned home, she found more than 100 trees down on her property in and her home severely damaged.

But her steadfastness might not be the only thing Noles will be remembered for when she retires next month. Every Christmas, she cooks one meal for her family, and another for her work family; it’s a tradition, she told the Daily News in December.

Around Christmas time, Noles also kept a stockpile high-dollar candy bars for her 23 employees as thank-you gifts for their tireless, dedicated service.

“It’s definitely hard not being with your family, but after so many years, you learn to adapt,” she said in December about holidays.

After she retires, Noles said she’s looking forward to spending time with her family and relaxing. When asked if she was looking forward to retirement, she responded: “I am, you know its kind of one of those things — in the last few months, I’ve been asking myself and wondering if I’m doing the right thing … but I think 40 years is enough. I’m ready to not work a schedule.”