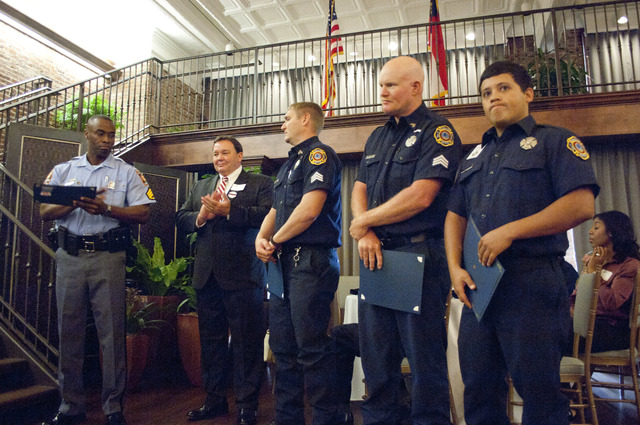 The first award went to Hogansville Police Department Lt. Richard Wolfe, who prevented a man from taking his own life. When Wolfe arrived at a Green Avenue home in Hogansville on Aug. 14, 2014, he found a man shaking uncontrollably, according to his award. The man took out a knife, switched open the blade, and said he wanted to “end it now,” according to the award.

As the man was moving to cut his wrist, Wolfe moved quickly and disarmed him, preventing him from hurting himself.

When firefighter Gary Casper, Sgt. Chris Greathouse and Sgt. Joshua Williams were dispatched to a woman who was experiencing chest pains and shortness of breath, it didn’t take them long to realize she was having a heart attack.

Someone called 911 and asked police to check on a man’s safety and Wheeler was called to respond. When he arrived at the home, he spoke to the man’s mother, who was unaware anything was wrong.

Wheeler insisted she check on her son, and when the mother found her son bleeding, she screamed. Wheeler ran to her aid and found the man with a large, self-inflicted wound to his throat.

He immediately began treating the man to control the bleeding until medical help arrived.

Man charged in alleged rape of teen appears in…