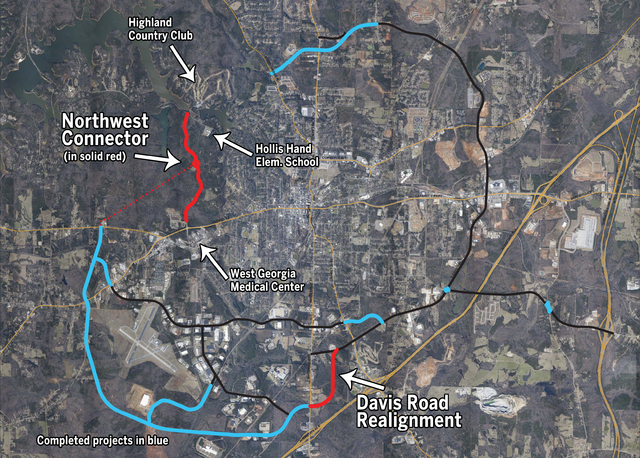 A milling machine tears up the roadway on Ridley Avenue at Haralson Street on Friday following a water line break Thursday evening. City officials expect the roadwork to continue through next week as they replace the waterline.

http://lagrangenews.com/wp-content/uploads/sites/37/2015/09/web1_Roadwork.jpgA milling machine tears up the roadway on Ridley Avenue at Haralson Street on Friday following a water line break Thursday evening. City officials expect the roadwork to continue through next week as they replace the waterline.

LaGRANGE — City officials said Friday they were aiming to complete the replacement of a water line that ruptured Thursday afternoon by the end of next week.

Tom Hall, LaGrange city manager, said crews are working to repack the ground below Ridley Avenue so the road can be repaved. Much of the ground beneath the road was disturbed by the water escaping the broken line.

On Friday, a milling machine tore up the top layers of about 150 yards of the left lane of the road. Construction crews plan to tamp down the ground and repave the lane, Hall said.

Once the left lane is repaired, crews will tear up the right lane and dig a trench to place a new water line, then repave the lane. The broken 12-inch water line, which Hall estimated was at least 80 years old, will be abandoned. One lane of traffic will remain open through the entirety of the project, Hall said.

“What would it have taken to bring a truck with 20 sand bags to help us keep the water out of our businesses?” he said to the Daily News by phone Friday.

Jimmy Goodwin, the operator of TWFG Insurance on Lafayette Square, said business owners were trying to use brooms to sweep the water out of their entryways. Goodwin estimated he had about two feet of water in his office’s basement.

Smith also said he’s concerned about the road work happening on Ridley Avenue because he and other business owners may lose customers. He also wonders what shape the rest of the water lines in and around Lafayette Square are in.

Crews worked late into the night to stop the water from flowing down Ridley Avenue. The water in the pipe was under pressure from two directions, Hall said, and crews initially had difficulty using valves to shut off the water. The nearest valve, which is on Lafayette Square, apparently was stripped and crews were unable to turn it to shut off the water. A different valve near Morgan Street had to be accessed to stop the flow, Hall said.

The water leak was first reported to Troup County 911 at 5:04 p.m., according to Suzy Noles, the 911 center’s director. A total of 12 calls were made to 911 reporting the leak. The first police officer arrived at 5:05 p.m. and began directing traffic, Noles said.

Workers were unable to shut off the water until 7:30 p.m., according to Hall. Still, the remaining water had to be pumped out of the hole dug by workers.

The city manager estimated the repair project may cost between $75,000 and $100,000 and the city has funds set aside for these kinds of situations. The city could also use special purpose, local-option sales tax funds for the actual road resurfacing.