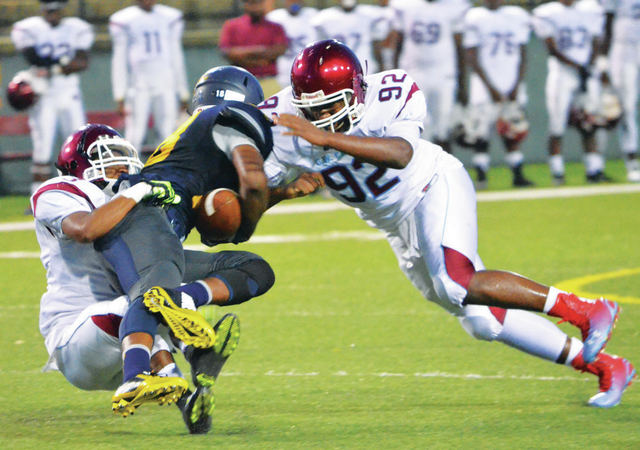 Troup quarterback Dexter Shealey gets ready to throw a pass during the first half of Friday’s loss to Carver. Kevin Eckleberry | Daily News

http://lagrangenews.com/wp-content/uploads/sites/37/2015/09/web1_troup31.jpgTroup quarterback Dexter Shealey gets ready to throw a pass during the first half of Friday’s loss to Carver. Kevin Eckleberry | Daily News LAGRANGE – There’s a reason college football teams have been pursuing Carver quarterback Jawon Pass so fervently the past few seasons.

The senior is a dynamic player who has so many different ways of beating defenses, and they were all on display during Friday’s game against the Troup Tigers.

Pass, who has verbally committed to Louisville, led his team to a 48-14 victory on homecoming night at Callaway Stadium.

Troup’s offense, with Dexter Shealey playing quarterback for the second straight game, did some nice things and moved the ball well, but the defense was unable to curtail Pass and company.

“Offensively, we’re getting better,” Troup head coach Tanner Glisson said. “Defensively, we can’t tackle me and you. We haven’t stopped anybody all year. We may have to start playing people both ways. I’m at a loss for words on defense. We’ve got a lot of work to do defensively. It’s frustrating because they practice so hard defensively, and then we come out here and just lay an egg.”

After Carver scored a touchdown moments into the game after recovering a fumble on the opening kickoff, Troup responded with an 83-yard scoring drive that lasted 10 plays and was capped by a 1-yard scoring run by Camren Russell.

Shealey, who made his first start at quarterback in last week’s game against Harris County, completed five passes on the drive, including a 30-yard completion to Mess Bonner that put the ball on the Carver 6-yard line.

It was a tremendous effort by Bonner, who turned what appeared to be a short completion into a 30-yard gain by dragging a handful of defenders more than 10 yards.

Bonner had four catches for 63 yards on the drive.

On Carver’s ensuing possesion, Troup’s Dantavious Rutledge came up with an interception, and the Tigers were in business again.

The Tigers were unable to put any more points on the board, though, and Carver drove 72 yards for the go-ahead touchdown when it got the ball back.

After Carver built a 21-7 lead, the Tigers found the end zone again, and this time it was Bonner doing the honors.

On a third-down play, Bonner took a handoff and out-raced the Carver defense for a 40-yard touchdown.

Carver responded with another touchdown to push the lead to 28-14, and with 25 seconds left in the half, Pass threw a scoring pass to make it a 35-14 game.

The halftime break did nothing to slow down Carver, which drove for a touchdown on the opening possession of the third quarter.

The Tigers answered with a nice drive of their own as they took the ball from their own 15-yard line all the way to the Carver 2-yard line before a fourth-down play failed.

After Troup’s defense came up with a much-needed stop on a fourth-down play, Carver had an interception two plays later, and it scored the game’s final touchdown with 9:39 left in the game.

Troup will be back at Callaway Stadium next Friday to take on Callaway.