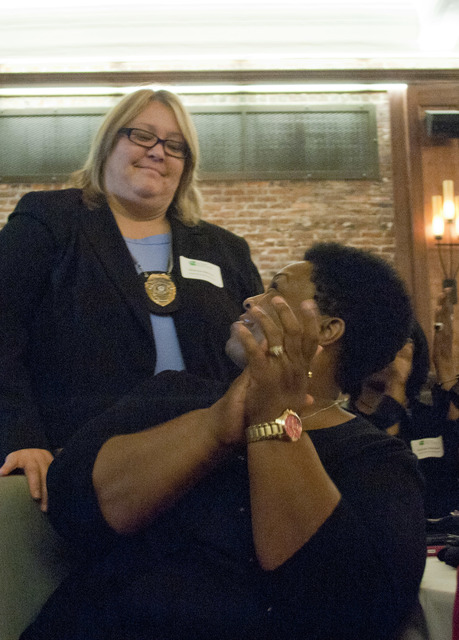 LaGRANGE — The 2015 LaGrange-Troup County Chamber of Commerce Public Safety Officer of the Year Award was presented to West Point Police detective Shannon Bavaro on Tuesday at the annual Valor Awards held at the Del’Avant event space on Main Street.

The award is presented to the public safety professional who has performed his or her duty with exceptional skill, expertise, innovation and results, according to a release by the chamber.

Bavaro was selected by a panel of civilians from among three candidates submitted by front-line supervisors.

She was chosen for her outstanding work solving an armed robbery case in West Point.

Officers with the West Point Police Department responded to a report of an armed robbery at a residence.

A man rang the doorbell to ask for change for a $20 bill. The mother responded she didn’t have any change. While closing the front door, there was a knock on the back door. The first man came into the home while she encountered two men at the back door, one of whom brandished a gun.

The mother and her son were able to escape to a neighbor’s home.

Bavaro was assigned the case. She found a hat that had been left by a suspect in the home and questioned a man who had been arrested for an unrelated crime that provided a possible suspect’s name.

Using social media, Bavaro found photos of the suspect — including one with the individual wearing the hat left behind. Through her knowledge of known associates of that suspect, Bavaro was able to identify the other individuals involved.

Through her innovative use of social media, the case was resolved within six days.