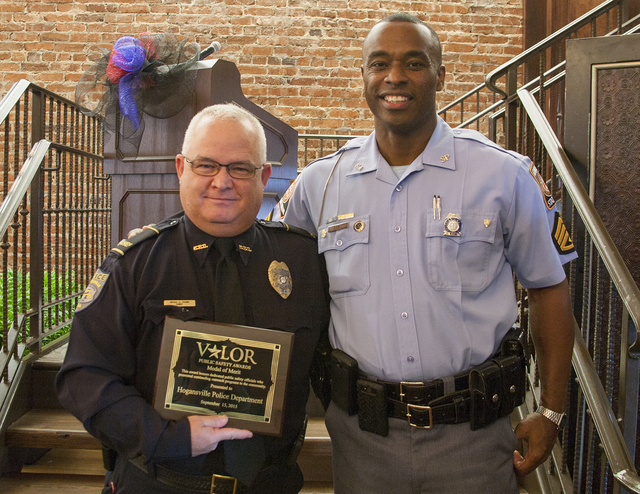 LaGRANGE — The LaGrange-Troup County Chamber of Commerce presented the Hogansville Police Department with the 2015 Medal of Merit on Tuesday at the annual Valor Awards at the Del’Avant event space on Main Street.

The award awarded to public safety officials who have presented outstanding outreach programs to the community, according to a release by the chamber.

The men and women of the Hogansville Police Department — and their families — have created a community garden that produced 200 pounds of vegetables in the fall and 250 pounds in the spring for the senior center and a local food closet.

The department also hosted a National Night Out family-fun event at Hogansville Elementary School that drew more than 200 attendees. Within this year, officers with HPD also participated in Trunk or Treat for Halloween and created the first annual Thanksgiving Meals Program, which delivered or served about 300 meals.

The generosity of the department didn’t stop there. Officers also delivered fruit baskets to elderly citizens at Christmas and hid more than 1,200 eggs for the annual Easter Eggtravaganza.

The events are aimed at creating trust and meaningful relationships between residents and the officers, which is developing mutual respect and trust, according to HPD Chief Brian Harr, who accepted the award on behalf of the department.