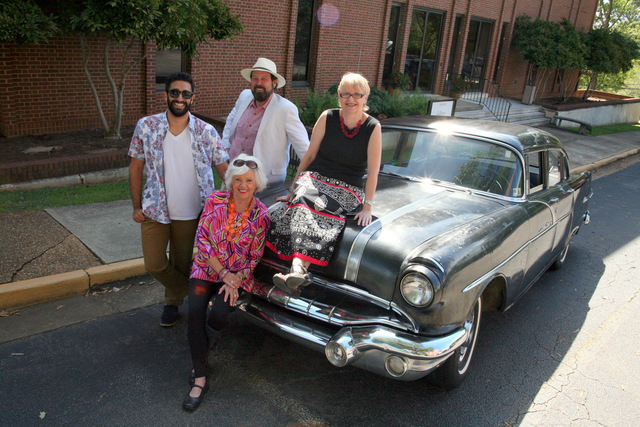 3D Journeys committee member Judy Boggus, bottom, joins Cuba lecturers Arya Alami, Don Livingston and Amanda Plumlee around a 1955-57 Pontiac Star Chief. Many of the cars in Cuba are at least 50 years old because of the former trade ban with the U.S. Not pictured is Oliver Greene, who will speak on Cuban music.

http://lagrangenews.com/wp-content/uploads/sites/37/2015/09/web1_WEB09213DJourneys.jpg3D Journeys committee member Judy Boggus, bottom, joins Cuba lecturers Arya Alami, Don Livingston and Amanda Plumlee around a 1955-57 Pontiac Star Chief. Many of the cars in Cuba are at least 50 years old because of the former trade ban with the U.S. Not pictured is Oliver Greene, who will speak on Cuban music.

LaGRANGE — When the organizers of LaGrange College’s 3D Journeys travel experience and lecture series selected Cuba as the 2015-16 destination, they had no idea the country soon would be thrust into the national and international spotlight.

In July, the United States and Cuba resumed diplomatic relations after more than 50 years of hostilities. The two countries have since reopened embassies in Washington and Havana.

However, Cuba was on the 3D Journeys radar much earlier than July, said Martha Pirkle, director of alumni and community relations.

“We actually started thinking about Cuba last year,” she said. “We made the selection in February and announced it in April, putting us about three months ahead of the government’s announcement. But as far as our trip goes, nothing really changed.”

That’s because Americans have been allowed to travel in the country if they met one of 12 required categories, including family visits, religious or educational activities and humanitarian projects.

“We are considered an educational group, so there weren’t any travel restrictions placed on us,” Pirkle said.

Steve Hart of Hart Travel Partners, organizers of the college’s trips, suggested that Cuba would be a good fit for LaGrange travelers.

“He thought it would be something out of the ordinary for us, and he knew we’d enjoy it,” she said. “He’s steered us right in the past, so we followed his advice.”

An overview of the Cuba lectures and trip will be 10 a.m. Sept. 28 in the Dickson Assembly Room. The lecturers will give a brief description of their topics, and information about the trip will be available.

This year’s speakers and their subjects are:

Amanda Plumlee, head of Latin American studies and modern languages, said her lecture will examine the literary voices that celebrate the Cuban identity.

“The beauty and richness of Cuba can be found in its literature and music,” she said. “For me, they are the very essence of Cuba.”

Arya Alami, Chair of the Exercise Science Department, said Cuba is a major force in the international sports community.

“Though isolated from much of the world for more than 50 years, the athletes of Cuba have maintained their prominence, placing in the top 10 of the medal count at the Olympics from 1976 to 2000,” he said.

“In the 2004 Olympics, Cuban boxers won gold in five out of 11 men’s events. Most recently, pole vaulter Yarisley Silva earned the silver medal in the 2012 Olympics, as well as the title in the world championship in 2015.”

Oliver Greene, associate professor of music at Georgia State University, earned a bachelor of music degree in vocal performance from the College Conservatory of Music at the University of Cincinnati. He also has a master’s degrees in voice and sacred music from Southern Methodist University and a doctorate from Florida State University. He teaches courses on world music, popular American music and carnival traditions.

Greene was a recipient of a Rockefeller Fellowship at the Center for Black Music Research, participated in an NEH summer seminar on Black Aesthetics and has published articles on Garifuna music and rituals. His 2006 documentary film “Play, Jankunu Play: The Garifuna Wanaragua Ritual of Belize” has been shown at universities, cultural arts affairs, international conferences and film festivals.

“Their teachers are well trained, respected and, in comparison to other professionals in Cuba, well paid,” he said. “With rigorous academic standards for all social groups, Cuban schoolchildren learn more than middle-class children from the rest of Latin America.”

Since joining the college in 2001, Livingston has traveled with his students to several study-away venues in Europe, Asia, Central America and New Zealand. His current comparative education research project examines how culture, religion, archetypes and national identity affect teacher preparation practices in countries around the world.

The annual fall 3D lecture and travel opportunity will center on William Shakespeare and one of his most popular plays, “A Midsummer Night’s Dream.”

English Professor Patti Marchesi and Provost David Garrison will discuss the comedy at 10 a.m. Oct. 26 in Dickson Assembly Room. In April, the travel group will attend a Shakespeare production at the Alabama Shakespeare Festival in Montgomery’s Blount Cultural Center.

The visit will include a tour of the Montgomery Museum of Fine Arts, the oldest fine arts museum in Alabama. Details and rates will be available at the Oct. 26 lecture.

Pirkle said the quality of the lecturers and travel experiences continue to draw people to 3D Journeys.

“This is the sixth year of the series,” she said. “We have an average of 100 people at the on-campus lectures, and we always have a waiting list for the trip. We are thrilled that the LaGrange community has embraced this program so warmly, and we look forward to many more years of learning and traveling together.”

For more information about 3D Journeys, email 3DJourneys@lagrange.edu or call the Office of Alumni and Community Relations at 706-880-8244.