Another close call for Panthers 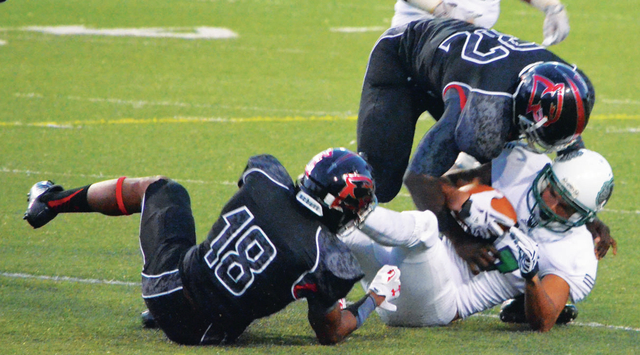 LaGrange College running back Jamarkis Holmes fights for yardage during the second half of Saturday’s game against Ave Maria. Kevin Eckleberry | Daily News

http://lagrangenews.com/wp-content/uploads/sites/37/2015/09/web1_9-21-LCfootball1-20.jpgLaGrange College running back Jamarkis Holmes fights for yardage during the second half of Saturday’s game against Ave Maria. Kevin Eckleberry | Daily News LAGRANGE – The LaGrange College Panthers are so close to being 3-0.

After losing their first two games by a combined four points, the Panthers were at home on Saturday hoping to get a breakthrough victory over an Ave Maria team that plays in the NAIA and offers scholarships.

Once again the Panthers were right there with a chance to win, but Andre Antoine came up with an interception with 15 seconds remaining to clinch the 28-21 victory for Ave Maria.

The Panthers had the ball twice in the game’s closing moments with a chance to pull even with a touchdown and an extra point.

The Panthers got the ball once more following a punt that pinned them deep in their own territory, and they made it to their own 39-yard line before the interception ended the suspense.

“It was a valiant effort against a scholarship program,” LaGrange College head coach Matt Mumme said. “We did a great job of never giving up and fighting to the very end. We have a great team in the making and I’m proud of these young men.”

After falling behind 21-0, LaGrange College grabbed some momentum by scoring a touchdown with 28 seconds left in the first half.

Twice in the second half the Panthers got within a touchdown, but they were unable to completely close the gap.

Sophomore quarterback Connor Blair had the most productive game of his young career, throwing for 400 yards while tossing three touchdowns, and 270 of those yards were in the second half.

Marsalis Jackson showed off his big-play ability with six catches for 114 yards with a touchdown, and Josh Hardrick caught 10 passes for 86 yards.

Ervens Oge, who had a combined 16 catches in the first two games, had four more receptions on Saturday with a touchdown, and Lavell Meeks had three catches with a touchdown.

As has been the case throughout the season, Blair spread the ball around, with 11 different players catching passes.

Brandon Penn led the defensive effort with 12 tackles and a forced fumble.

After a scoreless first quarter, Ave Maria struck for three touchdowns in less than 10 minutes in the second quarter, and the longest of those three scoring drives was 51 yards.

Less than five minutes later, Uecker connected with Kaleb Coffee for a 16-yard touchdown pass, and with 5:12 left in the first half Scott Jones had a 6-yard scoring run.

After the third touchdown, the Panthers began their ensuing possession from their own 13-yard line, and they embarked on a 12-play scoring drive that ended with a 12-yard touchdown pass from Blair to Meeks.

The Panthers had the ball first at the start of the second half, and they went to work again, going 72 yards in eight plays for the touchdown, with Oge hauling in a 15-yard touchdown pass from Blair.

Blair completed two third-down passes on the drive, one covering 21 yards to Untorrey Thomas, and one on the touchdown pass.

The extra-point attempt was no good, and LaGrange College was down 21-13.

Ave Maria answered with a quick, five-play, 89-yard drive that ended with a 42-yard touchdown run by Coffee, and the extra point pushed the lead to 28-13.

After taking over at their own 44 early in the fourth quarter, the Panthers needed just six plays to cut into the deficit.

On third-and-seven, Blair tossed a 40-yard touchdown pass to Jackson, and Blair then completed a two-point conversion pass to Thomas, and Ave Maria’s lead was down to 28-21.

It looked like Ave Maria was going to put the game away when it made it to the LaGrange College 5-yard line on its next possession.

On first down, though, Uecker fumbled, and the ball was recovered by Royce Owens.

The Panthers had the ball at their own 8-yard line, down by seven, with nearly four minutes to play.

After a Jamarkis Holmes 12-yard gain, Blair completed a pass to Hardrick, but while fighting for extra yards, he lost control of the football, and Ave Maria recovered the football.

LaGrange College’s defense had to force a three-and-out to keep hope alive, and that’s what happened.

Following an exceptional punt, LaGrange College took over at its own 4-yard line with 2:17 to play.

The Panthers got 25 yards on first down with a completion from Blair to Meeks, and Oge later had a 17-yard catch to get the ball close to midfield.

After an incompletion and a sack, Antoine sealed the Panthers’ fate with an interception.

LaGrange College is off next week, and it will open USA South play on Oct. 3 with a game at Averett.