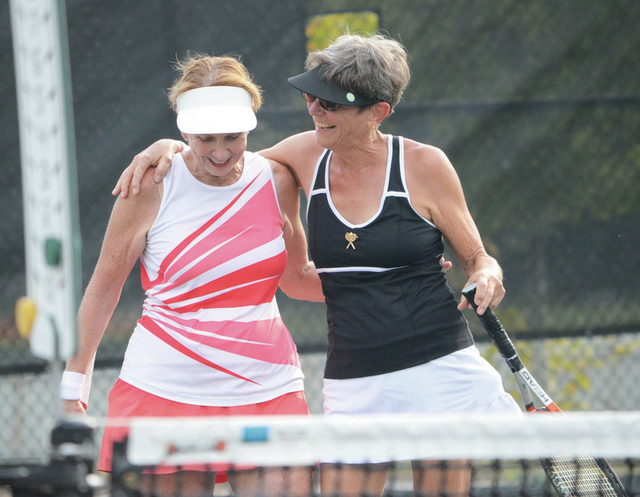 Cheryl Pitts and Jennie Choi celebrate after getting a win in the state finals. Kevin Eckleberry | Daily News

http://lagrangenews.com/wp-content/uploads/sites/37/2015/09/web1_9-21-tennis71.jpgCheryl Pitts and Jennie Choi celebrate after getting a win in the state finals. Kevin Eckleberry | Daily News LAGRANGE – Another state tournament, and another championship for a CHATA tennis team.

In August, a pair of teams representing the Chattahoochee Area Tennis Association captured titles in the tri-level state tournament that was held at the McCluskey Tennis Center.

Over the weekend, McCluskey Tennis Center was hosting another state tournament, and once again a CHATA team ended up celebrating a championship.

The United State Tennis Association combo state tournament was held Friday through Sunday, and nine teams were participating in the women’s 55-and-over 6.5 division.

By Sunday afternoon, there were two women’s teams remaining, including one representing CHATA.

There were three different doubles matches, and the team that won at least two of them would walk away with the top prize.

The local team won all three of the matches to not only win the state title, but earn a spot in the district tournament that will be held next spring.

In the women’s finals on Sunday, the teams of Cheryl Pitts and Jennie Choi, and Betty Hoffman and Susan Blanchard, and Annmarie Huberdeau and Doris Davis were winners for the local team.

Every player on the team contributed over the course of the three days.

Most of the players have been teammates for years, although Huberdeau, the team captain, said the newcomer provided a major boost.

“We’ve got one new girl, Jennie Choi, and it’s her first time with us,” Huberdeau. “We would not have won without our new player. She was great. Most of the other girls have been together. In fact some of the girls won another state championship, the exact same thing, but that was in Peachtree City. This was so much more fun.”

Huberdeau said the team members have a great time together.

“With all the people on this team, we’ve never had one word of friction,” she said. “We all get along great. We all go out to each together. We just have fun.”

Over the course of the weekend, Huberdeau said the support the team received was extremely helpful.

Other local players who weren’t involved in the tournament were there cheering the players on.

“Half of these girls watching us weren’t even our level,” Huberdeau said. “They were a higher level. They all came out. All through the tournament, people came out and watched.”