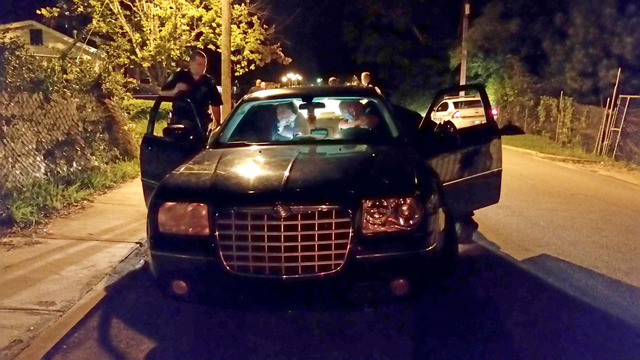 Sgt. Mark Cavender, head of the LPD’s Special Investigation Unit, becomes upset with the owner and manager of a club early Sunday morning after their doorman allegedly locked the front doors to the club when he spotted police investigators pull up in their SUV.

http://lagrangenews.com/wp-content/uploads/sites/37/2015/09/web1_WEB0922SIU1.jpgSgt. Mark Cavender, head of the LPD’s Special Investigation Unit, becomes upset with the owner and manager of a club early Sunday morning after their doorman allegedly locked the front doors to the club when he spotted police investigators pull up in their SUV. Sgt. Mark Cavender, left, and Investigator Ray Ham search the inside of a Chrysler sedan that had a strong odor of marijuana radiating from it. The car was parked in front of a house on Glen Robertson Drive that was also hosting alleged Bloods gang members that night. No drugs were found inside the vehicle.

http://lagrangenews.com/wp-content/uploads/sites/37/2015/09/web1_WEB0922SIU2.jpgSgt. Mark Cavender, left, and Investigator Ray Ham search the inside of a Chrysler sedan that had a strong odor of marijuana radiating from it. The car was parked in front of a house on Glen Robertson Drive that was also hosting alleged Bloods gang members that night. No drugs were found inside the vehicle.

Reporter’s Note: A portion of this story took place during my ride along with the LaGrange Police Department’s Special Investigation Unit during the late night hours of Sept. 19. The team was conducting its usual sweep of local bars checking for violations, answering calls for service involving possible drug use plus checking out parties that investigators said involved known gang members.

LaGRANGE — Local owners of bars, night clubs and social event establishments are expected to make their voices heard this afternoon at City Hall as they raise concerns to LaGrange leaders about proposed changes to the city’s ordinance for closing hours.

Currently, most night clubs and establishments in the city close their doors at 4 a.m. Under the proposed ordinance, all bars would have to close by 1 a.m.

According to Dekmar, the revisions to the city’s ordinances concerning the bars and night clubs had been in the works for months before the Aug. 30 deadly shooting of Tobias Ogletree, 24, inside the Good Times Sports Bar and Grill on Hogansville Road and the Aug. 15 shooting of a 30-year-old man in the parking lot of the same bar.

When the crew started their shift on Saturday, it started as a fairly quiet night. Cavender said it had been that way for some time, mainly since the shooting of Ogletree.

The investigator said another popular place that had seen its fair share of trouble inside and outside, the Sky Bar on Commerce Avenue, recently closed its doors for good. It seemed many people were opting to host private parties or possibly travel out of town for a night of dinner, drinks and dancing.

Since it was still fairly early for the bar scene — 9:30 p.m. — the SIU squad decided to follow up on some information they received about an alleged “gang party” held at a home on Glen Robertson Drive.

When the team pulled up to house, more than a dozen males were sitting outside. Some of them, Cavender later explained, were actually wearing shirts with their Blood gang sect name on the front. The smell of marijuana wafted through the air.

Investigator Ray Ham, who is also a gang expert, quickly zeroed in on a dark blue Chrysler sedan parked haphazardly in front of the house and into the roadway.

“Whose car is this?” he asked the group.

No one seemed to know, and when Ham questioned one male, he pointed to another teen, who then promptly pointed to someone else.

Investigators noticed the odor of pot seemed stronger around the car. They searched the vehicle for the suspected stash of marijuana but came up empty. When Ham then asked for someone to move the car into a proper parking space, only then did the rightful owner step up, keys in hand, and relocate the vehicle to another spot.

Cavender said the purpose of those visits is to try and prevent a situation from getting out of control and turning violent, plus remind gang members investigators are keeping track of their parties too.

The alleged gang gatherings at the bars and clubs around town, and ensuing violence, seem to be the driving force of why many business owners feel the proposed ordinance changes are being shoved down their throats.

Joseph Wimburn, manager of Commotions, said he feels he is being unfairly punished because a few “bad apples” do not follow the rules — and some bar owners are not taking responsibility for the trouble being caused by their clubs.

Under the new ordinance, all night clubs would be required to implement a security protocol for all patrons entering the premises, which includes, at minimum, portable metal detection devices — equipment Wimburn said he already has in his establishment.

Wimburn said if the new proposals pass, that will more than likely mean a loss of revenue for him and possibly the loss of his bar.

“It’s going to hurt us,” he stated. “People are going to start going to places in other counties … We’re either going to shut down … or you’re going to have people to become unemployed.

“I understand what happened was unfortunate,” Wimburn said, referring to the fatal shooting at Good Times. “But if that club had the same measures in place we had here, it wouldn’t have happened. It’s that simple.”

Other issues include: loitering in the parking lots, drug use inside of parked cars, clubs being overcrowded, traffic jams and accidents, DUIs, fights and more.

Some bars and night club establishments will also serve alcohol to minors and pour drinks past the allotted “last call for alcohol,” especially on Saturday nights, stated Cavender.

Some bars may even lock their doors when they see Cavender and the SIU crew pull up outside their establishment, as was allegedly the case at one club just after midnight Sunday morning.

“If I ever see you lock the door on me when you see me coming, we’re going to have a problem,” Cavender yelled at both the club owner and manager on the sidewalk outside the front doors of the building. “I’ll call the fire marshal out here and shut the place down if I have to.”

“I understand. That was the wrong thing to do,” said the manager.

According to Cavender and SIU Investigator Darrell Prichard, the doorman of the club was sitting outside of the club when he allegedly spotted the two men pull up in the department’s SUV. Both investigators stated they saw him quickly jump up and run inside the building, and just as Cavender and Prichard bolted out of the SUV towards the club doors, they said the doorman allegedly locked the men out.

The investigators ordered the man to unlock the doors immediately, which he did.

Even event establishments that cater to social gatherings such as Mel’s Events off Sage Commercial Drive, the next place part of the SIU team checked out, must follow city ordinances — and somewhat stricter guidelines — pertaining to alcohol and guests, stated Cavender.

Those places are usually “brown bag” establishments, meaning patrons must provide their own alcoholic beverages.

“People can bring it in, but you (the event hall) can’t provide any cups, ice, refrigeration — anything like that,” Cavender explained. “And all that alcohol has to be out of the building by midnight. It can’t even be inside the hall.”

In the proposed changes, “Brown bagging” establishments would follow the same new guidelines as bar owners. Owners of such places must also declare and register in the city as a “brown bag” establishment.

Prichard said even if the ordinances are not changed, some of them may need to be more defined, such as who should be held accountable and receive a citation for violating city codes.

“The bartenders are being told to sell the alcohol and they’re being told by their managers, ‘You work for me.’ So who do you write the ticket for? The bartender? The owner of the club? The manager? The ordinance isn’t clear,” explained Prichard.

Wimburn, the manager of Commotions, said he plans on getting a clearer picture of just what the new proposed changes to the city ordinances entail and how they will affect him on Tuesday during a closed meeting between city leaders and local bar owners.

He said he will also bring with him a copy of bar ordinances from surrounding cities and towns to show folks what LaGrange business owners will be up against if the council passes the proposed changes.

The meeting is closed to the public, but there will be a public hearing on the matter before it goes up for a vote before the City Council.