Troup, Callaway face off in another county showdown 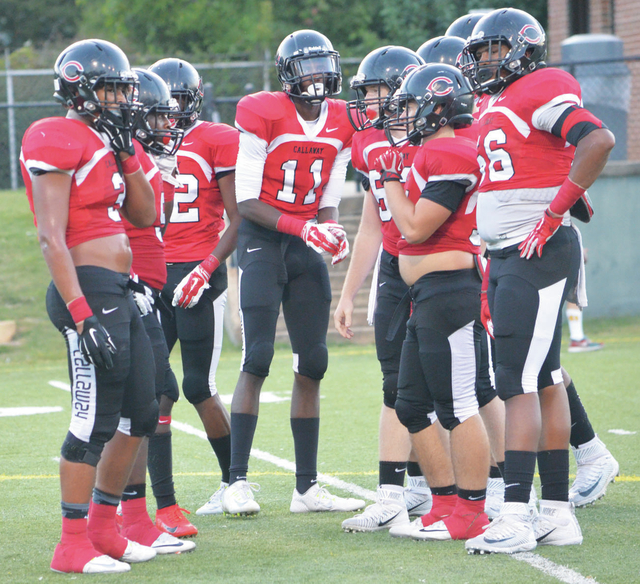 Tanner Glisson’s Troup Tigers will take on the Callaway Cavaliers on Friday as they look for their first win of the season. Kevin Eckleberry | Daily News

http://lagrangenews.com/wp-content/uploads/sites/37/2015/09/web1_9-21-troup1.jpgTanner Glisson’s Troup Tigers will take on the Callaway Cavaliers on Friday as they look for their first win of the season. Kevin Eckleberry | Daily News The Callaway Cavaliers will try to make it four wins in a row when they face the Troup Tigers on Friday. Kevin Eckleberry | Daily News

http://lagrangenews.com/wp-content/uploads/sites/37/2015/09/web1_9-21-callaway.jpgThe Callaway Cavaliers will try to make it four wins in a row when they face the Troup Tigers on Friday. Kevin Eckleberry | Daily News

For the third time in the first six weeks of the season, there will be a county showdown at Callaway Stadium.

The season began with LaGrange beating Callaway 45-20 on Aug. 21, and the following week LaGrange handled Troup 35-7 to win the county championship.

This week, it will be Troup and Callaway continuing their rivalry.

The two teams played for the first time in 2008, and a year hasn’t gone by since without Callaway and Troup facing off.

Troup leads the series 4-3, and it beat Callaway 37-27 a year ago to win the county championship.

Also this week, LaGrange will begin its Region 1-AAAAA schedule with a home game against Hardaway on Thursday.

Callaway High played its first football game in 1996, but it didn’t face Troup until 2008.

Callaway comes into this year’s game with momentum.

After losing to LaGrange, Callaway has won three in a row, and it beat Harris County 33-17 last week.

Troup, meanwhile, is looking to get things turned around after losing to Carver 48-14 last week to fall to 0-4.

For Callaway and Troup, it will be the final game before the start of region play.

Tanner Glisson, Troup’s first-year head coach, said he is striving to get his program to where Callaway’s is under Pete Wiggins, who has been the Cavaliers’ head coach since 2005.

“They are where we want to go,” Glisson said Saturday. “They have consistency, continuity among their coaching staff, they’ve been there for a long time. Pete and his guys are just a class act. They’re the utmost professionals. And they’re getting better every week. Pete’s teams are always going to be real physical, and we know that and expect that.”

Troup hung with Carver for a while in last week’s game.

With Dexter Shealey at quarterback, the Tigers moved the ball well, and when Mess Bonner went 42 yards for a touchdown in the second quarter, Carver’s lead was down to 21-14.

Earlier in the game, Carver had an 83-yard touchdown drive that ended with a Camren Russell 1-yard scoring run.

Shealey completed five passes on that drive, and four of them went to Bonner for a combined 63 yards.

As good as Troup’s offense was, though, Carver was unstoppable all night with Louisville-bound quarterback Jawon Pass leading the way.

In its four games, Troup has given up an average of 44 points per game.

“The offense feels like they’ve got to score every time they get the ball,” Glisson said. “That’s not a fun position to be in.”

While Troup is searching for answers, things are trending in the right direction for Callaway, which is coming off an impressive win over Harris County.

“I feel like we’ve gotten better each week, and as a coach that’s what you’ve got to ask for, and they’re playing with good effort, and we’ve just got to keep working and keep believing in what we do,” Wiggins said.

Against Harris County, senior running back Cedric Maynard, who is having an amazing season, ran for 296 yards on 27 carries with four touchdowns, and quarterback Braylon Sanders threw a 33-yard scoring pass to Dre Martin.

For the season, Maynard has an astounding 818 yards on 80 carries, and if he puts together another big game this week, he could have more than 1,000 yards at the halfway point of the regular season.

Callaway’s defense, which gave up a few big plays in the first half, didn’t allow a point in the second half for the second straight game.

As well as Callaway is playing right now, though, Wiggins is expecting a typically “hard-fought” game against Troup this week.

“It’ll be a hard-fought, physical game, just like it always is, and we’v just got to get ready and play Callaway football,” Wiggins said.

“It’s a big game this week with Troup,” Wiggins said. “It’ll be a physical game and an emotional game. A lot of tradition in that game between the two teams. It’s a big week, and we’ve just got to go to work and keep doing what we do and limit our mistakes, from a penalty, turnover standpoint, and just keep working hard.”

LaGrange, coming off Friday’s 16-13 loss to Mary Persons, will begin its pursuit of a region championship this week.

LaGrange (2-2) has dropped two straight games since beating Callaway and Troup, but those two losses came against Spalding County and Mary Persons, who are a combined 8-0.

LaGrange lost those two games by a combined 12 points.

In last week’s game, LaGrange tied it on a 17-yard touchdown pass from LaPerion Perry to Derieko Smith late in the fourth quarter, but Mary Persons kicked a field goal as time expired to get the win.

In eight-man football this week, Lafayette Christian School (3-2) will look to end its two-game losing streak when it hosts Central Christian on Friday.