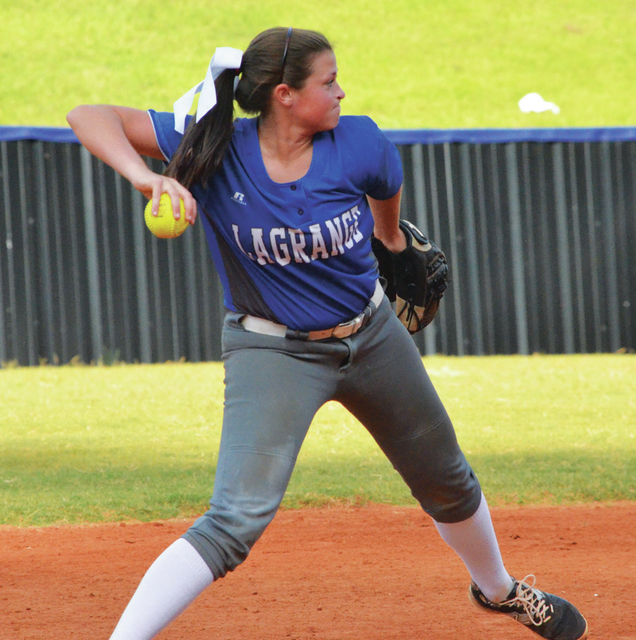 LaGrange shortstop Lauren Kuerzi makes a throw to first for an out during Tuesday’s 18-0 win over Shaw. Kevin Eckleberry | Daily News

http://lagrangenews.com/wp-content/uploads/sites/37/2015/09/web1_9-23-LHS2-20.jpgLaGrange shortstop Lauren Kuerzi makes a throw to first for an out during Tuesday’s 18-0 win over Shaw. Kevin Eckleberry | Daily News

LAGRANGE – They had their walking shoes on.

The LaGrange Lady Grangers scored 18 runs in two innings against Shaw on Tuesday, and they managed to do it despite getting just a smattering of hits.

There were walks, a whole bunch of walks, with Shaw’s pitchers unable to get the ball in the strike zone, or anywhere close to it.

After scoring a modest four runs in the first inning, LaGrange busted the game open with 14 runs in the bottom of the second.

The game ended after the top of the third inning because of the run rule.

LaGrange (7-15 overall) improved to 4-4 in Region 1-AAAAA with four region games remaining in the regular season.

In the first inning, Leighton Parker and Shaq Sutton each had an RBI single as LaGrange built a 4-0 lead.

After LaGrange pitcher McLain Skinner set Hardaway down in order in the top of the second, LaGrange sent 19 batters to the plate in the bottom of the inning.

The inning began modestly enough with a flyout, and that’s when the walk-fest began.

After three walks loaded the bases, Hannah Karcher reached on a walk to make it a 5-0 game.

After Parker and Sutton both scored on an error, two more walks loaded the bases, and Miranda Hamer drew a walk to push the lead to 8-0.

Kedaysha Griffin got a pitch to swing at, and she reached on an infield single to drive in a run.

With the bases still loaded, Kuerzi walked to drive in another run, Cassidy Creed was hit by a pitch to bring in a run, and Parker, Sutton and Karcher walked, and the lead was 14-0.

After a popout for the second out, Skinner walked to bring in a run, and after courtesy runner Shakira Brewer scored on a wild pitch, Brewer and Kuerzi walked to drive in the final two runs.

LaGrange will be on the road against Columbus on Thursday.

SOCCER: The LaGrange Academy Warriors got a big 4-0 road win over Oak Mountain on Tuesday.

The Warriors improved to 3-1 in the region with two region games remaining.

Zach Callaghan led the Warriors with three goals, and Mason Brown had one goal.

Will Trotter had a pair of assists, and Jake Keeble had two assists.

“It was a really strong game,” LaGrange Academy coach Mike Petite said. “We dominated them. We outshot them 25-5 on the night. They really didn’t have a lot of real good opportunities to score. We moved the ball around really well, and it was a really good team win for us.”

LaGrange Academy will visit Brandon Hall on Thursday before wrapping up region play on Tuesday with a home game against Furtah Prep.