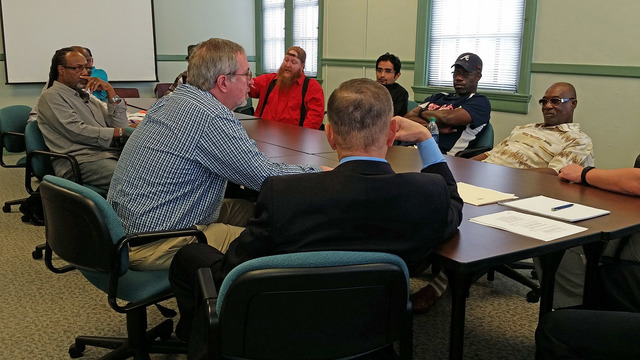 A handful of owners and managers from bars and nightclubs around LaGrange discuss the proposed changes to the city ordinance with LaGrange Police Chief Lou Dekmar, center, and City Manager Tom Hall, second from left.

http://lagrangenews.com/wp-content/uploads/sites/37/2015/09/web1_WEB0923LGBarMtg.jpgA handful of owners and managers from bars and nightclubs around LaGrange discuss the proposed changes to the city ordinance with LaGrange Police Chief Lou Dekmar, center, and City Manager Tom Hall, second from left.

LaGRANGE — A handful of local bar owners and managers squared off against some LaGrange leaders at City Hall on Tuesday over a proposal that would limit their business hours.

No city council members or Mayor Jim Thornton attended the gathering. Instead, the bar owners and managers met with City Manager Tom Hall and some of the authors of the proposal from the LaGrange Police Department, Public Safety Chief Lou Dekmar, Sgt. Mark Cavender and Capt. Mike Pheil.

Two of the biggest concerns for bar owners over the proposed revisions: moving the mandated closing time from 4 a.m. to 1 a.m., and bars must stop serving alcohol to patrons at 12:30 a.m. instead of 1 a.m. during the week.

According to Dekmar, those two modifications could have a positive impact on the community, especially when it comes to curbing violence and other problems that occur when these clubs start to shut down.

Both Dekmar and Cavender said investigators and officers deal with a range of crimes from shootings and fights in the parking lots of these bars, to rampant drug use, DUIs and a multitude of traffic issues just outside.

Inside bars, Cavender said investigators deal with bartenders serving alcohol to minors and pouring liquor after midnight on Saturdays, plus overcrowding issues, among others.

“I’ve got every unit in the city dealing with that issue, sometimes even the sheriff’s office and GSP (Georgia State Patrol) too,” he told the bar owners. “So the challenge is how can we mitigate that situation … sometimes we have SIU (Special Investigations Unit) roll up to a club and the doormen will see them coming and run into the building and lock the doors.

“We need you all to understand that I can’t have all my units tied up on Friday and Saturday nights dealing with these issues,” Dekmar emphasized to the owners and managers. “Sometimes medical personnel can’t even get in to stage inside an area because of all the crowds.”

But the owners said not all the issues could be blamed on the local nightclubs.

Other nightclub owners and managers nodded and murmured in agreement.

But Cavender said bar owners need to step up and taking responsibility for what goes on inside their establishment and the type of patrons walking through their front doors.

“If you see flyers about gang parties going on at your bar and people walk in wearing certain colors, bandanas and shirts that say R.I.P or G.I.P and you can’t keep them out, then that’s your problem,” Cavender told them. “If it walks like a duck and quacks like a duck, then it’s a duck. If your patrons look and act like gang members, then they probably are, and you allowed them in.”

LaGrange Police Department officials said most of the violent crime happens in the city limits between 3 and 4 a.m.

After more discussion between the club owners and LPD, Hall proposed a compromise. He asked the managers if the last call for alcohol remained the same — 1 a.m. during the week and the state-mandated midnight on Saturdays — would they be willing to shut down their establishments at 2 a.m.

Most of the owners agreed.

Dekmar said the compromise will be a win-win situation for everyone involved.

“It’s your business, so you have to exercise control and due diligence,” he told the bar owners. “But all of us want the same thing. When you shut the doors at night, everyone wants to go home safe.”

“I think that was the key right there,” said Dexter Roberts, co-owner of Full Tilt Riders Clubhouse. “Just to be able to compromise. All of us want to be able to keep our community safe.”

“It works better in the community if the bar owners and the City Council can work together,” added Joseph Wimburn, owner of Commotions.

But not everyone was satisfied with the outcome of the meeting or with the compromise.

“I’m not happy with the closing time,” said Barnes. “My patrons typically don’t get there (to Good Times) until 11 p.m. I cater to a lot of people that work at the Kia plant. By the time they get there, it will be 11:30 p.m., then it’s going to be time to leave … so that’s going to hurt me … there’s no money to be made.”

Hall explained the feedback from Tuesday’s meeting, including the new compromise, would be shared with City Council. Council will still need to vote on the proposal.

The other modifications to the proposal would remain the same. Those include:

• “Brown bagging” establishments, where patrons bring their own alcoholic beverages, would follow the same new guidelines as bar owners. Owners of such places must also declare and register in the city as a “brown bag” establishment.

• All nightclubs would be required to implement a security protocol for all patrons entering the premises, which includes, at minimum, portable metal detection devices.

• All employees of a nightclub where alcohol is served who are directly involved in the sale of alcoholic beverages must attend an alcoholic awareness training session.

• Patrons aged 21 and older entering a club must present a valid ID at the door. The club then must either provide the guest with a hand stamp or non-removable wristband as confirmation of age each time the patron attempts to purchase an alcoholic beverage in the establishment.

• Those who are at least 18 years old may be admitted into a nightclub only with an accompanying parent or legal guardian. This is also part of “Michael’s Law,” which was passed by the Georgia legislature and signed into law by Gov. Nathan Deal in May. It will take effect statewide on July 1, 2016.

Hall said he would send each bar owner a revised draft of the changes discussed on Tuesday. The city manager also told the crowd a reading of the proposed modifications to the ordinance could happen at the City Council in two weeks.

The bar owners said they would be at the first reading with supporters to make sure their voices are heard and that their livelihoods are protected up until the final vote.

“If the recommendations are approved the way they proposed them, I’ll be happy,” Roberts said.