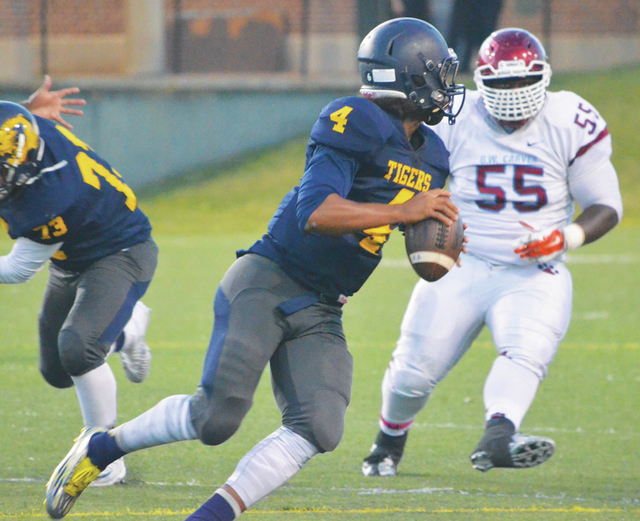 Dexter Shealey has done a nice job in his two games as the Troup starting quarterback. Kevin Eckleberry | Daily News

http://lagrangenews.com/wp-content/uploads/sites/37/2015/09/web1_9-22-shealey.jpgDexter Shealey has done a nice job in his two games as the Troup starting quarterback. Kevin Eckleberry | Daily News

Not a lot went right for the Callaway Cavaliers in their season opener against LaGrange, but there was one bright spot.

Cedric Maynard, in his first start at running back, had more than 160 yards on the ground while averaging nearly 12 yards per attempt.

Maynard hasn’t slowed down since.

The senior is having a remarkable season, and if he has a big performance against Troup on Friday, he could surpass 1,000 yards, and the regular season will only be halfway done.

It’s been that kind of season for Maynard, who ran for an eye-popping 296 yards against Harris County last week, and he has 818 yards in four games.

Maynard won’t be the only big-play running back on the field Friday night.

While Troup has struggled this season, senior Mess Bonner has provided an explosive presence on the offensive side of the football, just as he did a year ago.

Those two players will be counted on to continue to make big plays on Friday at Callaway Stadium when Callaway and Troup face off for the eighth straight season.

A year ago, Eddie Culpepper was the featured back for Callaway, and he was phenomenal.

Heading into a new season, Callaway’s coaches felt Maynard was ready to take over as the primary running back, and they were right.

Maynard gave a glimpse of what was to come when he scored on a 70-yard touchdown run on the first play of a preseason game against Greenville.

He’s done nothing but make big plays since then, and against Harris County, he delivered an epic performance.

Maynard averaged 11 yards per carry en route to his 297-yard night, and he had four touchdowns.

The offensive line opened some holes, and Maynard did the rest.

“The line did good,” Maynard said. “They told me to run the ball, and they’ve got my back. They blocked great for me.”

After his opening-night effort against LaGrange where he ran for 167 yards on 14 carries with a touchdown, Maynard returned the following week and ran for 250 yards on 21 carries in a win over B.E.S.T. Academy, and he had a 56-yard touchdown run.

Maynard had more than 100 yards against Heard County, and his touchdown run in the fourth quarter capped a 20-17 comeback victory.

After a week off, Maynard was back on the turf at Callaway Stadium last week, and Harris County’s defense had no chance.

He had nine runs of at least 10 yards against Harris County, including an 84-yard touchdown run that came right before the half and gave Callaway a 20-17 lead.

One play after Harris County scored to take the lead, Maynard took a handoff from quarterback Braylon Sanders and raced nearly the length of the field for the touchdown.

On Callaway’s first three offensive plays of the second half, Maynard had runs of 12, 11 and 18 yards, and that drive ended with Sanders throwing a 33-yard touchdown pass to Dre Martin.

Later in the half, Callaway was faced with a fourth-and-five situation, and Maynard ripped off a 15-yard run.

On the next play, Maynard scored his fourth touchdown of the game from five yards out.

Harris County’s defense knew what was coming, but it didn’t matter.

The overall numbers are staggering.

On just 80 carries this season, Maynard has run for 818 yards, and he has seven touchdowns.

While Maynard headlines the offense, junior Braylon Sanders has looked more and more comfortable each week in his first season as the starting quarterback, and he has become a legitimate threat running or passing the ball.

Sanders has five touchdown runs to go along with scoring passes to JT Wortham and Martin.

“Braylon is really settling into our offense, and I’m really proud of his leadership, just learning the system, and getting more confidence each week,” Callaway head coach Pete Wiggins said.

Martin, who started five games at quarterback a year ago, has become Sanders’ top target, and he had a scoring catch last week.

“We all work together,” Maynard said. “It’s not my myself. I’m a team captain. We learn, and we push each other harder and harder just to get better. It’s a partnership. We’re working hard.”

For Troup, Bonner showed of his versatility, talent, speed and toughness during last week’s game against Carver.

On Troup’s first offensive opening possession, which resulted in a touchdown, Bonner did his damage in the passing game with four catches for 63 yards, including a 30-yard catch where he carried a handful of defenders for about 15 yards.

Carver has a strong defensive line, so Troup head coach Tanner Glisson figured a wait to combat that was to involve the speedy Bonner in the passing game.

“We got Mess out of the backfield a litle bit and tried to get him one-on-one with some linebackers, and just tried to take what they were going to give us,” Glisson said.

Later in the half, after Carver had taken a 21-7 lead, Bonner showed what he can in the running game.

On third down, Bonner got outside and beat the Carver defense for a 40-yard touchdown run, and the Tigers were within seven.

Bonner also had touchdown runs against LaGrange and Northgate this season, and he scored twice in a preseason game against Upson-Lee.

Fellow running back Camren Russell also has a pair of touchdown runs this season, and since moving to quarterback two weeks ago, Dexter Shealey has done a nice job of running the offense and he has a scoring run.

Tremayne Tolbert and Travis Johnson have done a nice job catching the ball, and an inexperienced offensive line continues to make strides.

In the first half against Carver last week, Troup scored two touchdowns and moved the ball with ease.

In the second half, although the Tigers didn’t score, they continued to chew up big chunks of yardage, and they made it inside the Carver 10-yard line on one possession before a fourth-down play failed.

“I think offensively right now you’re starting to see what we envisioned us being,” Glisson said.