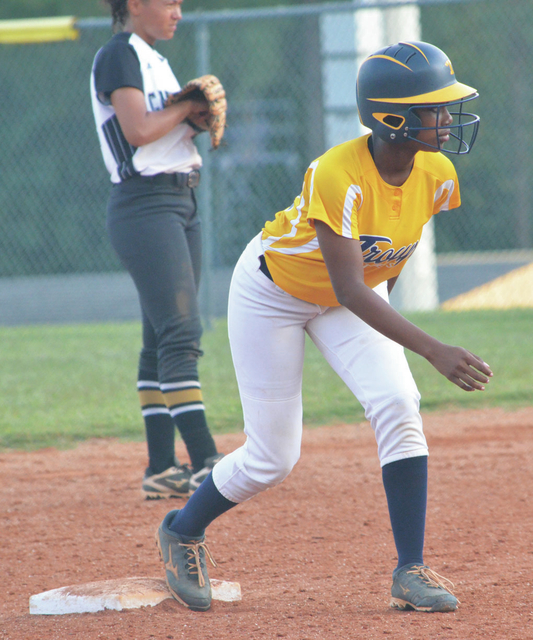 Troup’s Cierra Gilbert gets a lead off second base during Tuesday’s loss to Carrollton. Kevin Eckleberry | Daily News

http://lagrangenews.com/wp-content/uploads/sites/37/2015/09/web1_9-23-troup2-27.jpgTroup’s Cierra Gilbert gets a lead off second base during Tuesday’s loss to Carrollton. Kevin Eckleberry | Daily News

LAGRANGE – The fifth inning hasn’t been kind to the Troup softball team in its two games against Carrollton this season.

Earlier this month, it was a scoreless game through four innings, but Carrollton broke through for six runs in the bottom of the fifth on the way to a 6-0 victory.

Those same two teams squared off again on Tuesday afternoon, and once again things turned in a big way in the fifth inning.

Troup surged to a 3-0 lead, and it still had a one-run lead as Carrollton came to bat in the top of the fifth inning.

By the time the Lady Trojans were done hitting in that inning, they’d scored five runs, and they had a 7-3 lead.

Troup hung tough and scratched a pair of runs across in the final two innings, but it was Carrollton walking away with an 8-5 win.

It was a tough loss, but it was an encouraging effort for Troup against a Carrollton team that hasn’t lost a region game this season.

Troup finished with seven hits, and it also had five walks.

Hanna Lane had two of those hits, including a triple, and she drove in a run.

Amber Arnold also had two hits, Madison McCartney had a double and an RBI, and Andrea Nix, Kayla Lane and Abby Taylor each had RBIs.

Andrea Nix and Chandler Pritchett each had a hit, and Kinley Stanford scored two runs.

Troup jumped on top with a run in the top of the first inning.

Hanna Lane, who is having an exceptional senior season with a team-best .500 batting average, led off the first inning with a base hit, and she later scored on a Kayla Lane sacrifice fly.

Stanford led off with a walk, and she scored on a double by Nix, and Taylor later drove in a run with a groundout.

Carrollton scored single runs in the third and fourth inning before surging to the lead with five runs in the fifth inning.

After Carrollton scored another run in the top of the sixth, Troup got a run back in the bottom of the sixth.

Stanford was hit by a pitch, and she later scored on a Hanna Lane triple.

Troup added one more run in the seventh inning.

Taylor reached on an error and Arnold singled, and McCartney had an RBI double later in the inning to complete the scoring.

The Lady Tigers will complete their region schedule on Thursday with a game at Whitewater, and they have four games remaining in the regular season.

Troup is locked into third place in the region, meaning it will be the number three seed for the region tournament.

Shimandle believes the team is well-positioned moving forward, especially with the progress made by the pitchers.

Hanna Lane has handled most of the pitching duties for Troup this season, but Taylor and Kayla Lane have also been throwing well.

“Kayla has stepped up the few times she’s had to throw,” Shimandle said. “She’s getting comfortable there, and that’s going to help us. She throws a little bit harder than the other two. It gives them a different look. That’s going to be a key part of our success is being able to mix pitchers when necessary just to be able to change speeds.”