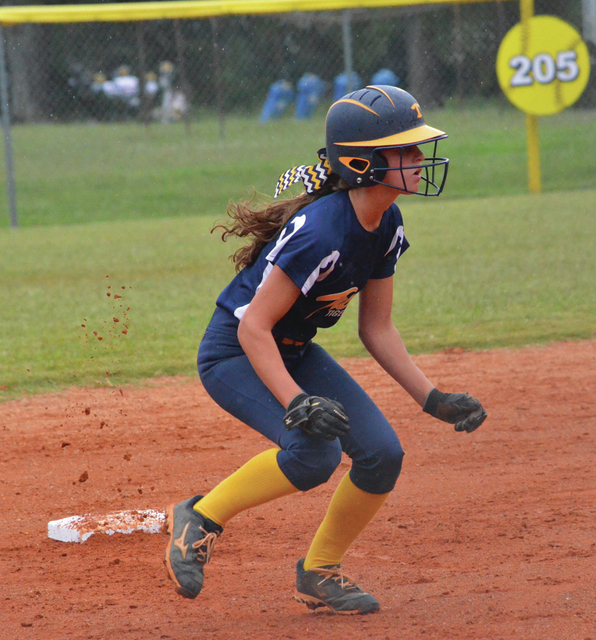 Troup’s Amber Arnold gets a lead off second base during Monday’s game. Kevin Eckleberry | Daily News

http://lagrangenews.com/wp-content/uploads/sites/37/2015/09/web1_9-22-troup2-1.jpgTroup’s Amber Arnold gets a lead off second base during Monday’s game. Kevin Eckleberry | Daily News

They needed a win.

After beating LaGrange 2-1 on the final day of August, the Callaway Lady Cavaliers dropped five straight games, and they were hoping to reverse that trend on Monday at Hardaway.

The Lady Cavaliers had their second-highest scoring total of the season on the way to a 13-0 victory.

Also on Monday, Troup stepped out of region play and lost a home game to Central-Carroll 13-2.

As for Callaway, it will look to carry the momentum of Monday’s win into today’s home game against Region 5-AAA foe Haralson County.

The Lady Cavaliers are looking for their first region win of the season after seven straight losses.

“We just did a good job from start to finish,” Callaway head coach Ashley Summerlin said. “We pitched well, and got big hits that we haven’t had in a long time. The attitude and effort was great.”

Callaway lost to Haralson County 9-1 on Sept. 1, but Summerlin believes his team can win the rematch.

“The team we’re going to play is going to be better (than Hardaway), but it’s not like they’re head and shoulders better than us,” Summerlin said. “We were able to score first, put pressure on Hardaway, and that’s what we need to be able to do (today).”

Jessica Perkins was the starting and winning pitcher, and she also hit a home run.

Brittany Mitchell, Keshonna Terrell and Kelly Carlisle each had two hits for Callaway, and everyone in the lineup had at least one hit.

“From top to bottom, we did exactly what we needed to do,” Summerlin said. “We pounded out hits like we’re capable of doing. We played good defense, and pitched the ball well.”

In Monday’s game at Troup, a strong Central-Carroll team that is ranked in the top 10 in Class AAA came away with the win.

The Lady Tigers, who are short-handed with some key players out with injuries, will return to their Region 5-AAAA schedule today with a home game against Carrollton.

Troup will then wrap up its region schedule with a game at Whitewater on Thursday.

Troup, which lost to Carrollton and Whitewater earlier in the season, is 5-3 in the region.

In Monday’s game, Troup scored single runs in the first and third innings.

In the first inning, Amber Arnold walked and later scored on an error.

In the third inning, Hanna Lane and Arnold had back-to-back one-out singles, and Lane eventually scored when she stole home.