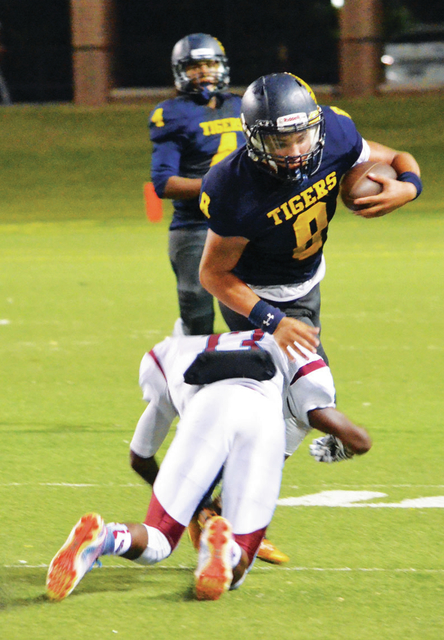 Troup’s Travis Johnson runs after making a catch during last week’s game against Carver. Johnson and the Troup offense has made great strides this season. Kevin Eckleberry | Daily News

http://lagrangenews.com/wp-content/uploads/sites/37/2015/09/web1_9-23-tigers3.jpgTroup’s Travis Johnson runs after making a catch during last week’s game against Carver. Johnson and the Troup offense has made great strides this season. Kevin Eckleberry | Daily News

Troup first-year head coach Tanner Glisson makes no guarantees, no promises about what’s going to happen the rest of the season, but at the close of Tuesday’s practice session, he said everyone on the team, coaches and players included, are doing everything they can to make the most of this season.

“I think when you’re worried is when you see people throwing their helmets, having bad attitudes. That’s when you’re worried,” Glisson said. “Right now, they just want to win, they want to get better. We’re just trying to go one day at a time right now. That’s all you can do. That’s kind of where we are.”

The Tigers head into Friday’s showdown with the Callaway Cavaliers looking for their first win of the season.

Glisson feels the team has made strides, that it has gotten better game by game, but he said that’s hard to measure since the Tigers play such a daunting schedule, and it doesn’t get any easier.

“We come up (to practice), we bring our A game every day. And to be honest, we have gotten better,” Glisson said. “But here’s the problem. We’re playing Carver, and Callaway. When we start judging progress, you have to look hard and know what you’re looking at to see progress. On the scoreboard, it’s not there. You’re not seeing the progress. But if you’re a football coach, you can see the progress.”

Glisson said that progress is most evident on the offensive side of the football.

Against a stout Carver defense, Troup moved the ball well.

The Tigers scored a pair of touchdowns in the first half, one on a short scoring run by Camren Russell, and the other on a 40-yard run by Mess Bonner.

Quarterback Dexter Shealey, who was making his second straight start, did a nice job of running the offense, and he made plays with his feet and his right arm.

Wide receivers Tremayne Tolbert and Travis Johnson, along with Bonner out of the backfield, all caught passes from Shealey against Carver.

Troup’s defense has had a difficult time getting off the field.

The Tigers figured to have some growing pains on that side of the football with so many new starters, and that has been the case.

Glisson said the lack of experience, and the physical immaturity of the players, has led to the defensive struggles.

“Right now, we don’t have any confidence. That’s kind of what it is on defense,” Glisson said. “We’re so inexperienced too that we’re not able to make good adjustments.”

Glisson said it’s not for a lack of effort or preparation on defense.

“We’ve got so many things we’ve got to shore up on the defensive side of the ball,” Glisson said. “It’s very disheartening, because we work very hard at it. We’ve got to look at making sure we have the right people in the right places.”

The challenge will be another tough one for Troup this week.

Callaway, since opening the season with a loss to LaGrange, has won three in a row, including last week’s impressive 33-17 win over Harris County.

Callaway’s outstanding senior running back, Cedric Maynard, ran for 297 yards with four touchdowns in that game.

While this will be Glisson’s first time going up against Callaway as a head coach, he is extremely familiar with the program.

He has coached against Callaway at Greenville and Manchester, and he also faced the Cavaliers when he was a quarterback at Manchester.

“I was quarterback the first year Callaway was in existence,” Glisson said. “It goes all the way back to my playing days.”

Glisson has known Callaway head coach Pete Wiggins for more than a decade, and he said he appreciates his friendship.

“He’s a great guy,” Glisson said. “He and I have probably known each other for 15 years. He calls me and encourages me. He’s a high-class guy.”

Glisson watched Callaway play LaGrange, and he was impressed with what he saw, even though that was a losing night for the Cavaliers.

“I thought they dominated the first quarter, and penalties killed them,” Glisson said. “They had two long runs called back. If they would have had those plays, it would have been a totally different game. They couldn’t ever get any momentum. They’re a good football team. They’ve gotten better. They’ve just as good as Carver.”