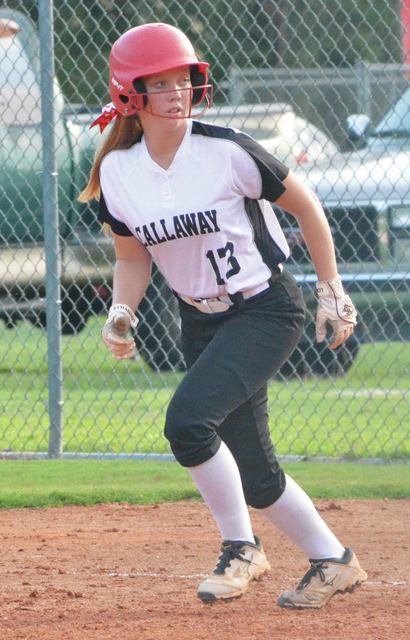 HOGANSVILLE – As soon as bat met ball, the outcome was inevitable.

When Brittany Mitchell stepped to the plate in the bottom of the seventh inning of Tuesday’s region home game against Haralson County, the Callaway Cavaliers had already pushed a run across to pull even.

Mitchell, a senior and a player who has been delivering big hits since her freshman season, came to bat with the winning run standing on second base.

Mitchell’s thought process was to “just hit the ball, and at least get the girl at second in.”

She did that and more.

Mitchell got a pitch she could handle, she took a big swing and made perfect contact, and the ball sailed way over the left-field fence for a walk-off, game-winning, two-run home run.

It was Mitchell’s first home run of the season, and the timing couldn’t have been better.

It was a much-needed win for the Lady Cavaliers, who came into the game with an 0-7 record in Region 5-AAAA play.

Three of those losses were by one run, and after Haralson County rallied for three runs in the top of the seventh, it looked like the Lady Cavaliers could be headed for another close loss.

“I know it’s been hard for them, not just losing, but the way we’ve lost,” Callaway head coach Ashley Summerlin said. “We’re sitting here, and we’re going out in the bottom of the seventh, and here we are we’ve lost three one-run games already. And it was here we go again, another one-run game.”

The bottom of the seventh hardly started out in encouraging fashion for the Lady Cavaliers, and with two outs, there was no one base and the deficit was still one run.

Kelly Carlisle, who had four hits out of the nine hole in the order, followed with a single that was hit so sharply that there was no chance of Gallaway scoring from second base.

“She hit the ball so hard to the right fielder that she had the ball before Mallory touched the bag,” Summerlin said.

Next to the plate was Mitchell, with the tying run on third base and the winning run on first.

Turns out, Mitchell didn’t even need to take a swing for the tying run to score.

Haralson County’s catcher attemped a pickoff throw to third base, and the ball got away, allowing Gallaway to score, and Carlisle to move to second.

“We finally get some luck and the girl throws the ball to third base, and it bounces away and we tied the game up,” Summerlin said. “I really did feel that we were not going to play another inning after that. I thought that we were going to pull it out.”

He was right, with Mitchell coming through with her first ever walk-off home run.

“When she hit that ball, I’m surprised it didn’t go in that reservoir out there (beyond the outfield fence),” Summerlin said. “She smoked that ball.”

Mitchell, who has moved to catcher this season after playing third base for most of her high-school career, is hopeful the emotional win will give the team a boost heading into the home stretch.

“It gives us a reassurance that we’ve got this, that we can win if we put our minds to it,” Mitchell said. “I think it’ll be big for us.”

Callaway has fallen behind in every one of its region’s games this season, and that was the case again on Tuesday, with Haralson County scoring three runs in the top of the first inning.

Callaway answered with two runs in the bottom of the first.

Mitchell led off with a double, and with one out, Jessica Perkins brought her in with a base hit, and Keshonna Terrell followed with an RBI double.

Callaway took its first lead of the game with a pair of runs in third inning.

After Oeisha Jenkins singled and Lydia Bartlett walked, Gallaway and Carlisle came through with back-to-back base hits, and Callaway was up 4-3.

Callaway added another run in the sixth inning, with Molly Hubbard reaching on a walk and scoring on a Perkins double.

With a pair of singles, a double, and an error in the top of the seventh, Haralson County scored three runs to turn a two-run deficit into a 6-5 lead.

Then came the dramatic bottom of the seventh, and the Lady Cavaliers were able to celebrate a thrilling win.

Perkins got the start for Callaway and she pitched well, and Gallaway was the winning pitcher after entering the game in relief in the top of the seventh.

Callaway, which ended a six-game losing streak with Monday’s 13-0 win over Hardaway, has now won two in a row for the first time in more than a month.

“The thing about softball, you have to playing well come tournament time, and it seems like some things are coming together,” Summerlin said. “We’ve got some pitchers we can roll out there. I’m just glad we won. I’m glad the girls got to feel that. That’s two in a row, and they’ve got opportunities to win every other game.”