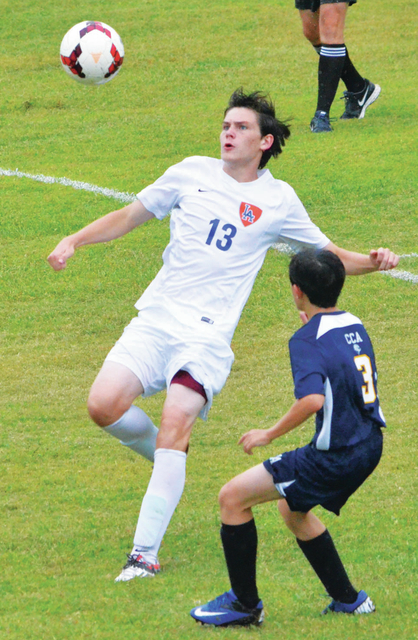 The next three games for the LaGrange Academy boys’ soccer team will be against region opponents, and there’s still a whole lot to be decided.

All four teams in the region will qualify for the state playoffs, but where those teams will be seeded still has to be determined.

The Warriors, who are 2-1 in the region, will visit Oak Mountain today and Brandon Hall on Thursday before hosting Furtah Prep on Sept. 29.

After the Furtah Prep game, LaGrange Academy will know where it will be seeded for the start of the Georgia Independent Christian Athletic Association state playoffs on Oct. 6.

LaGrange Academy has finished second in the state tournament the past two seasons.

LaGrange Academy tuned up for this key stretch by beating Covenant Christian 8-0 at home on Monday.

“With three region games, we can finish anywhere from first to fourth,” LaGrange Academy coach Mike Petite said. “I told the guys, the best thing about it is we control every bit of that. It we play how we can play and do what we’re supposed to do, then we’ll be number one. If we don’t, we can literally be number four.”

All three of LaGrange Academy’s previous three region games were decided by one goal.

The Warriors beat Oak Mountain and Brandon Hall, and they lost to Furtah.

“There’s no margin for error,” Petite said. “You can’t slip up. It’s up to us whatever happens.”

In Monday’s game, the Warriors took care of business.

Will Trotter scored three goals, giving him a hat trick for the second consecutive game.

Zach Callaghan added two goals, giving him 13 for the season, and he has become the second-leading scorer in the history of the boys’ soccer program behind Matt Piestrak.

Also scoring twice was Jake Keeble, who has 10 goals this season, and Emilio Del Toro added one goal.

“I talked to the guys before the game, and we talked about playing our style of soccer, staying composed, regardless of what happens, and just making them work hard by moving the ball,” Petite said. “And we did that pretty much all night long. It was good to see them play as well as they played.”