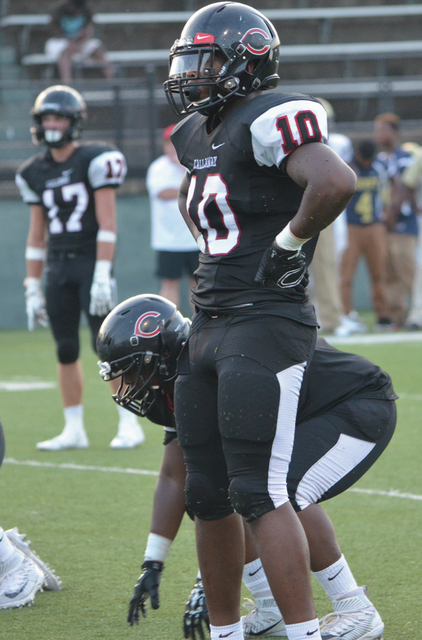 Callaway’s defense huddles during a game this season. The Cavaliers haven’t allowed a point in the second half of their past two games. Kevin Eckleberry | Daily News

http://lagrangenews.com/wp-content/uploads/sites/37/2015/09/web1_9-24-CHS2.jpgCallaway’s defense huddles during a game this season. The Cavaliers haven’t allowed a point in the second half of their past two games. Kevin Eckleberry | Daily News HOGANSVILLE -There was no panic.

Were the Callaway Cavaliers disappointed to lose their season opener to the LaGrange Grangers?

Of course they were.

It’s a long season, though, and head coach Pete Wiggins had all the confidence that his team would rebound and get better week by week.

The Cavaliers have followed up their loss to the Grangers with three straight wins, including last week’s impressive 33-17 victory over a Harris County team that won the Region 1-AAAAA championship a year ago.

Callaway came into the season having to replace a bunch of key players from last year’s team, including Terry Godwin, who is now making plays as a wide receiver for the Georgia Bulldogs.

“We lost a lot of players from last year who had played a long time,” said Wiggins, whose team will play Troup on Friday night at Callaway Stadium. “Obviously Little T (Godwin), and Eddie (Culpepper), and LaBronze (Zeleya), but also Devin Powell, Harley Taber, Josh Williams. All those guys played for three or four years and had started. It’s hard to replace those reps. Then you’ve got a lot of new guys come in, and even a guy like a Javoski Leverette (linebacker) who didn’t play last year with a broken leg. And then we had Braylon Sanders moving from wide receiver to quarterback.”

Now everyone has settled into their respective role, and Callaway appears headed for another big season.

“With each week, they get better, and it’s just believing in one another, and our coaches are doing a great job pushing the kids and demanding a lot out of them,” Wiggins said. “And they’re working hard, and I feel like we’ll keep getting better.”

Wiggins also said some players who began the season as backups have done a tremendous job after moving into the lineup because of injuries.

“Injuries are a big part of a season,” Wiggins said. “A lot of times people don’t see that. You have to overcome those things and somebody else has got to step up. A lot of our young kids have played well and gotten better, and they work hard to get where they’re at, and I’m really proud of their attitude.”

The Cavaliers have it working on both sides of the football.

Offensively, Callaway is getting a phenomenal senior season from running back Cedric Maynard, who ran for nearly 300 yards and had four touchdowns in last week’s 33-17 win over Harris County.

In four games, Maynard has accumulated more than 800 yards on the ground.

Sanders has looked more comfortable each game at quarterback, Dre Martin has made great strides at wide receiver and had a 33-yard touchdown catch against Harris County, and an offensive line that has been in transition all season because of injuries has been getting it done.

Callaway’s defense has done its part as well.

In the past two games against Heard County and Harris County, Callaway hasn’t allowed a point in the second half.

Last week against Harris County, defensive lineman JT Wortham was one of five players in double figures in tackles.

Wortham, a defensive lineman, had 12 tackles, including four tackles for loss, and he lived in the Harris County backfield.

It was the continuation of an exceptional senior season for Wortham, who won the team’s Ironman competition before the season.

“It’s just gotten more and more where teams run away from him,” Callaway defensive coordinator Dusty Hubbard said of Wortham. “He really made a jump in the offseason, especially as far as his strength. He did a lot of speed work and has gotten a lot faster.”

Leverette, a linebacker who missed the 2014 season with a broken leg, also had 12 tackles against Harris County, as did Dylan Johnson, and Dre Martin and Tyrek Frazier added 10 tackles apiece.

As for Friday’s game, Wiggins is expecting a great effort from the Troup Tigers, even though they have struggled to an 0-4 start.

“They have a lot of talent on offense. Those guys make plays, and they play hard,” Wiggins said. “We just have to go out and play fast on defense, and on offense limit our mistakes and execute when there’s opportunity, and when there’s momentum we’ve got to take advantage of it.”

This will be the eighth time Troup and Callaway have played, and Troup leads the all-time series 4-3.

A year ago, Callaway led going into the fourth quarter, but Troup rallied for a 37-27 win.

“We’ve had a pretty good week of practice, and it’ll be a big atmosphere Friday night,” Wiggins said. “I know regardless of records, both teams will put it all out there, and it’ll be a hard-fought game.”