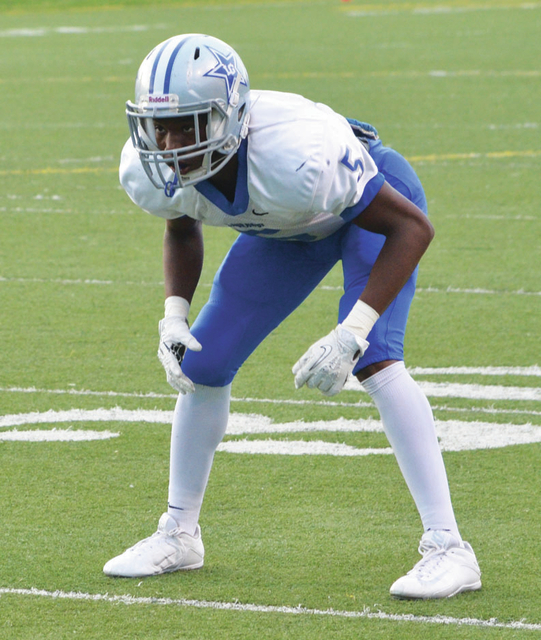 LaGrange head coach Dialleo Burks talks to his players during a game this season. LaGrange will begin its Region 1-AAAAA schedule with today’s game against Hardaway. Kevin Eckleberry | Daily News

http://lagrangenews.com/wp-content/uploads/sites/37/2015/09/web1_9-24-LHS1.jpgLaGrange head coach Dialleo Burks talks to his players during a game this season. LaGrange will begin its Region 1-AAAAA schedule with today’s game against Hardaway. Kevin Eckleberry | Daily News LaGrange’s defense has stood tall this season, and the players on that side of the ball will look to keep it going against Hardaway tonight. Kevin Eckleberry | Daily News

http://lagrangenews.com/wp-content/uploads/sites/37/2015/09/web1_9-24-LHS-defense2.jpgLaGrange’s defense has stood tall this season, and the players on that side of the ball will look to keep it going against Hardaway tonight. Kevin Eckleberry | Daily News Derieko Smith caught a go-ahead touchdown pass late in last week’s game against Mary Persons, and he also had a big game at defensive back. Kevin Eckleberry | Daily News

http://lagrangenews.com/wp-content/uploads/sites/37/2015/09/web1_9-24-LHS-smith.jpgDerieko Smith caught a go-ahead touchdown pass late in last week’s game against Mary Persons, and he also had a big game at defensive back. Kevin Eckleberry | Daily News

LAGRANGE – They are a few plays away from being perfect.

After one-sided victories over Callaway and Troup to begin the season, LaGrange lost to Spalding County and Mary Persons by a combined 14 points.

None of that matters now, though, with LaGrange set to begin its Region 1-AAAAA schedule with a home game against Hardaway today.

A year ago, LaGrange finished third in the region behind Carver and Harris County, and one of its four region wins came against Hardaway.

The Hawks, who bring a 1-3 record into today’s game, are an improved team.

With a 33-30 victory over Chattahoochee County on Aug. 27, the Hawks ended an 18-game losing streak that dated back to the 2013 season.

Marco Lee, who ran for 151 yards on just 11 carries in the win over Chattahoochee County, gives the Hawks a big-play threat at running back.

LaGrange is coming off an inspired effort against a strong Mary Persons team.

It was tight the whole way, and a field goal as time expired gave Mary Persons a 16-13 victory.

LaGrange’s defense, which has played well all season, held a 4-0 Mary Persons team to a season low in points.

One of Mary Persons’ touchdowns was set up by a fumble on a punt return inside the LaGrange 10-yard line.

Among the defensive standouts was senior safety Dominique Copeland, who had a remarkable 16 tackles.

“You watch the film, he was all over the place,” LaGrange defensive coordinator Marvin Kendricks said of Copeland. “He was going and getting them. He’s so fast.”

Senior linebackers Jeremiah Wright and Bobby Willoughby were both in double digits in tackles as well, and junior Jonathan Olajubutu had six tackles and was part of a defensive line that has been a strength of the team this season.

“We have guys that continue to get better, gain more experience, and learn,” Burks said of the defensive players. “They’re doing a good job of holding each other accountable. They’re learning to play together as a unit. That’s really what I want to see.”

While the Grangers only scored 13 points, they moved the ball well.

LaPerion Perry threw for 261 yards and had a pair of scoring passes, one covering 56 yards to Mike Hardy, and the other going to Derieko Smith for 17 yards.

The touchdown pass to Smith, which came late in the fourth quarter, pulled the Grangers even.

That was part of a stellar all-around night for Smith, a standout defensive back who hadn’t been a big part of the offense until last week.

“That was his first time being targeted, and he had five catches, had a touchdown,” Burks said. “He locked down a Division I receiver. He had a great game.”

Andrew Askew, one of LaGrange’s many offensive weapons, had five catches for 130 yards, and Wright led the ground game with 62 hard-earned yards.

“We’ve got guys who can make plays when they touch the ball,” Burks said.

The Grangers’ two losses are against teams with a combined 8-0 record, and they were right there with a chance to win both games.

“We have to figure out how to win those games,” Burks said. “Pretty much that’s two in a row where we’ve come down to the end, and we’ve got to find a way to dig deep and make a play and pull it out. That’s all we’re really looking for, to continue to play at a high level every day.”