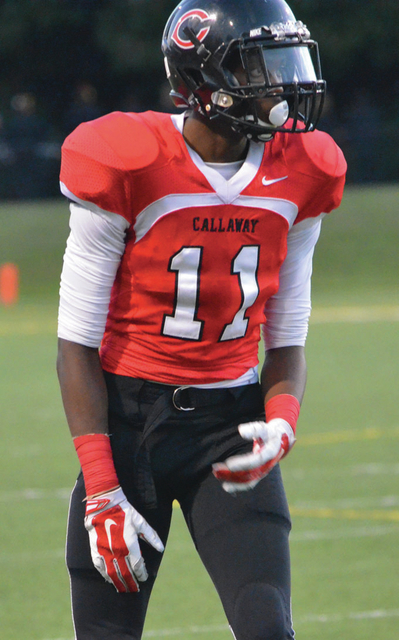 Camren Russell and the Troup Tigers will look to break through for a win against Callaway today. Kevin Eckleberry | Daily News

http://lagrangenews.com/wp-content/uploads/sites/37/2015/09/web1_9-25-russell.jpgCamren Russell and the Troup Tigers will look to break through for a win against Callaway today. Kevin Eckleberry | Daily News Wide receiver Joe Brown and the Callaway Cavaliers will be looking for their fourth straight win when they play Troup tonight. Kevin Eckleberry | Daily News

http://lagrangenews.com/wp-content/uploads/sites/37/2015/09/web1_9-25-brown.jpgWide receiver Joe Brown and the Callaway Cavaliers will be looking for their fourth straight win when they play Troup tonight. Kevin Eckleberry | Daily News

LAGRANGE – The Callaway Cavaliers were one quarter away from a third straight victory over the rival Troup Tigers.

As the third quarter came to a close in last year’s game against the Tigers, the Cavaliers had the lead, but they ended up losing 37-27.

The Cavaliers are hoping for a happier ending today when they take on the Tigers in the renewal of the county rivalry.

The teams have played every year since 2008, and Troup owns a 4-3 edge in the series.

Troup and Callaway will meet for the eighth time today, with kickoff set for 7:30 p.m. at what should be a jam-packed Callaway Stadium.

The teams come into the game heading in different directions.

Callaway dropped its season opener to LaGrange, but it has won three in a row since then, including a 33-17 win over Harris County a week ago.

Troup is still looking for its first win after falling to 0-4 with last week’s 48-14 loss to Carver.

Troup head coach Tanner Glisson believes the team has improved and will continue to better, but he also knows wins will be hard to come by in the coming weeks.

After today’s game, Troup faces a formidable group of opponents in Region 5-AAAA.

“You’ve got Callaway, Woodward, Sandy Creek and Carrollton,” Glisson said. “You just try to get better and keep working.”

Glisson said all of the players and coaches are doing everything they can to get things moving in the right direction.

“We’re just trying to go one day at a time right now,” Glisson said. “That’s all you can do. That’s kind of where we are.”

Callaway struggled in a season-opening loss to LaGrange, especially in the penalty department with the team getting flagged more than 20 times

The Cavaliers have tightened things up since that game, though, and they’ll head into today’s game with a lot of confidence.

“With each week, they get better, and it’s just believing in one another, and our coaches are doing a great job pushing the kids and demanding a lot out of them,” Callaway head coach Pete Wiggins said. “And they’re working hard, and I feel like we’ll keep getting better.”

After today’s game, Callaway and Troup will play their final five games of the regular season against region opponents.