It’s an easy day at the office for Grangers 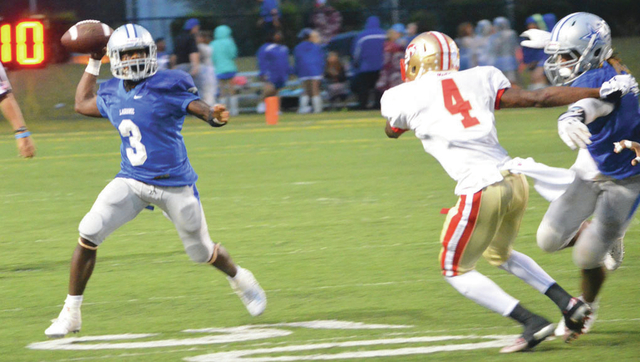 LaGrange running back Jeremiah Wright follows the block of Coy Tedescucci during the first half of Thursday’s 49-6 victory over Hardaway. Kevin Eckleberry | Daily News

http://lagrangenews.com/wp-content/uploads/sites/37/2015/09/web1_9-25-LHS81.jpgLaGrange running back Jeremiah Wright follows the block of Coy Tedescucci during the first half of Thursday’s 49-6 victory over Hardaway. Kevin Eckleberry | Daily News http://lagrangenews.com/wp-content/uploads/sites/37/2015/09/web1_9-25-LHS201.jpgLaGrange’s defense makes a gang tackle during the first half on Thursday. LaGrange’s defense didn’t allow a point in the game. Kevin Eckleberry | Daily News LaGrange’s Mike Hardy makes a long catch in the first half that set up a touchdown. Kevin Eckleberry | Daily News

http://lagrangenews.com/wp-content/uploads/sites/37/2015/09/web1_9-25-LHS101.jpgLaGrange’s Mike Hardy makes a long catch in the first half that set up a touchdown. Kevin Eckleberry | Daily News LaGrange’s defense gets in position before a snap on Thursday night. The Hawks not only didn’t score an offensive touchdown in the game, but they didn’t come close to the end zone. Kevin Eckleberry | Daily News

http://lagrangenews.com/wp-content/uploads/sites/37/2015/09/web1_9-25-LHS181.jpgLaGrange’s defense gets in position before a snap on Thursday night. The Hawks not only didn’t score an offensive touchdown in the game, but they didn’t come close to the end zone. Kevin Eckleberry | Daily News LAGRANGE – It was an encouraging start for the Hardaway Hawks.

After Jaquan Daniels came up with an interception on the first play from scrimmage during Thursday night’s game at Callaway Stadium, the Hawks had the ball at the LaGrange 32-yard line, and they were looking to take the early lead.

Instead, the Hawks were knocked backward by a suffocating LaGrange defense, and they had to give the ball back after a fourth-down play failed.

The Grangers promptly drove 73 yards for the touchdown, and they were off and running.

A lock-down defense combined with a big-play offense proved to be too much for Hardaway as LaGrange rolled to a 49-6 victory in the Region 1-AAAAA opener for both teams.

It was a complete and thoroughly dominating performance by the Grangers (3-2), who led 49-0 before Hardaway scored a late touchdown on a kickoff return.

“What we’re trying to do is set the tone for the region,” said Guy Wegienka, a senior offensive lineman for the Grangers. “We were trying to tell everybody, LaGrange is something this year.”

As has been the case in every game this season, LaGrange’s defense was stout.

The Hawks were stymied offensively all night, and they never even came close to the LaGrange end zone.

“The coaches, they challenge us, don’t let them get past the 50,” senior linebacker Bobby Willoughby said. “We don’t want them to get first downs period. Our motto is just to get to the ball. Everybody gets to the ball.”

After getting held to a combined 23 points in the previous two games, the Grangers busted out against the Hawks.

All of the offensive weapons were on display, including junior quarterback LaPerion Perry, who had an 81-yard touchdown run, as well as a 41-yard scoring pass to Andrew Askew.

Keaote Davis had a pair of touchdown runs in the first half, Jeremiah Wright had one scoring run, and freshman quarterback Jacolby Smith capped the scoring with a short touchdown run in the fourth quarter.

LaGrange also scored a defensive touchdown, with Jadarius Young returning a fumble for a score.

That certainly proved to be the case against the under-manned Hawks.

After Hardaway’s first possession ended with a failed fourth-down play, the Grangers had the ball at their own 27-yard line, and nine plays later they were in the end zone.

Wright had an 18-yard carry on the drive, and Perry completed a 21-yard pass to Derieko Smith on third down that put the ball on the Hardaway 12-yard line.

Two plays later, Wright took a handoff from Perry, and he carried a handful of Hardaway defenders into the end zone for an 11-yard touchdown.

The extra-point attempt was unsuccessful, and LaGrange led 6-0 with 4:54 left in the opening quarter.

On Hardaway’s next possession, Smith picked off a pass and made it all the way to the end zone, but the touchdown was called back because of a penalty.

On third-and-long, Perry connected with Askew for a 14-yard gain, and on the next play, Davis went straight up the middle for an 8-yard touchdown run, and LaGrange led 12-0 late in the first quarter.

In the second quarter, the Grangers took over at their own 8-yard line following a punt, and they only needed six plays to go 92 yards.

The Grangers got out of the shadow of their own end zone with a 14-yard completion from Perry to Will Pauley.

The Grangers continued to march down the field, and after Perry’s 39-yard keeper to the 11-yard line, Davis scored on the next play, and the Grangers were up 18-0 with 4:25 to play in the opening half.

It looked like the Grangers were going to put some more points on the scoreboard shortly before the half.

After Perry completed a 35-yard pass to Askew, LaGrange had the ball on the 5-yard line.

On the next play, the Grangers fumbled, and the Hawks recovered the ball in the end zone, but the Grangers were still in command, and they 18-0 at the half.

Hardaway’s first possession of the second half, unsurprisingly, ended with a punt, and LaGrange took over at its own 38-yard line.

Back-to-back 12-yard runs by Amad Ogletree and Perry put the ball in Hardaway territory, and a few plays later, Askew was wide-open and Perry found him for a 41-yard touchdown pass.

Wright muscled his way into the end zone for the two-point conversion run, and LaGrange led 25-0.

After another Hardaway punt, it took LaGrange one play to score again.

Perry kept the ball, he went straight up the middle and found himself with nothing between him and the end zone but green turf.

With Hardaway’s defenders futilely trying to chase him down, Perry showed off his speed and raced 81 yards for the touchdown, and Wright’s two-point run pushed the lead to 34-0 with 5:39 to play in the third quarter.

It got worse for the Hawks moments later when a bad snap on a punt attempt resulted in a safety, and LaGrange’s lead was 36-0.

Early in the fourth quarter, LaGrange’s defense got into the act, with Young, a junior linebacker, scooping up a ball deep in Hardaway territory and returning it for a touchdown, and the lead was 49-0.

A second bad snap on a punt attempt gave the Grangers the ball at the 3-yard line.

Hardaway avoided the shutout when Jakobe Ellerbee returned the ensuing kickoff 85 yards for a touchdown.