‘A family across the globe’ 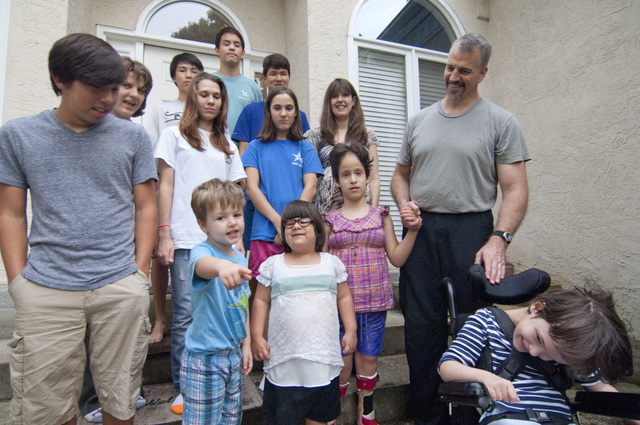 Lydia Rosencrants, right, helps her daughter Julia, 10, with homework at their home on Taylor Len Drive on Tuesday. Rosencrants, who is pregnant, is expecting her second biological daughter soon.

http://lagrangenews.com/wp-content/uploads/sites/37/2015/09/web1_PopeVisit02.jpgLydia Rosencrants, right, helps her daughter Julia, 10, with homework at their home on Taylor Len Drive on Tuesday. Rosencrants, who is pregnant, is expecting her second biological daughter soon. Owen Rosencrants, 4, smiles toward a camera at his home on Taylor Len Drive in LaGrange on Tuesday. Owen is the Rosencrants first biological child and one of 10 siblings in the family’s home.

http://lagrangenews.com/wp-content/uploads/sites/37/2015/09/web1_PopeVisit03.jpgOwen Rosencrants, 4, smiles toward a camera at his home on Taylor Len Drive in LaGrange on Tuesday. Owen is the Rosencrants first biological child and one of 10 siblings in the family’s home. Scott Rosencrants, second from right, poses for a photo with his family outside their home Tuesday evening. Rosencrants and his wife, Lydia, have one biological child and adopted 10 children from overseas, some of whom have mental and physical disabilities.

http://lagrangenews.com/wp-content/uploads/sites/37/2015/09/web1_PopeVisit01.jpgScott Rosencrants, second from right, poses for a photo with his family outside their home Tuesday evening. Rosencrants and his wife, Lydia, have one biological child and adopted 10 children from overseas, some of whom have mental and physical disabilities.

LaGRANGE — With 11 children and another on the way, the Rosencrantses are the definition of family. Their home in a subdivision north of LaGrange is filled with toys, sporting equipment, scattered homework assignments and love.

Scott Rosencrants, father and a member of Western Heights Baptist Church on West Point Road, is a stay-at-home dad while his wife, Lydia, chairs the business department of LaGrange College. On Wednesday, though, it wasn’t his church he addressed as part of a series on family.

The Rev. Patrick Scully, pastor of St. Peter’s Catholic Church on Lafayette Parkway, invited Rosencrants to speak to St. Peter’s parishioners on his unconventional family and what it means to love unconditionally. The local parish is holding a series of talks in conjunction with a visit to the United States by Pope Francis, leader of the world’s estimated 1 billion Catholics. The pope is in Philadelphia this weekend to lead the World Meeting of Families conference.

“I think that’s a great way to say, ‘hey, look, the focus is on the family, the mission of the family,’” Scully said. “I wanted to bring in someone who is living something that is unconventional and also build bridges with other churches. It doesn’t have to be a Catholic that talks to Catholics, you can have somebody else to share how they’re living the faith. That’s what Pope Francis is doing, reaching out trying to create a family across the globe.”

Rosencrants, a Navy veteran who served aboard submarines as a nuclear electrician, explained that 10 of his 11 children are adopted; four from Kazakstan, three from Bulgaria and three from Russia. In his younger years, he hadn’t planned on being an adoptive father, but all that changed when he was watching football in his living room in the year 2000.

“My wife came downstairs and told me, ‘I think God is telling me we’re going to adopt,’” he said. “Being a Navy man, I knew how to take orders.”

After a rigorous adoption process, Rosencrants and his wife flew to Kazakhstan and adopted not one, but two boys. They traveled to Moscow to board their flight home to the United States. The Rosencrantses were tired and the new mother and father both had sinus infections, he said. They boarded their plane and settled into their seats for the long flight home. In Eastern Standard Time, the date was 6 p.m., Sept. 10, 2001.

As the jetliner cruised across the Atlantic Ocean, the plane dropped altitude and Rosencrants said he could see the ocean. The captain came on the public address system and told the passengers U.S. airspace was closed and the flight would divert to Canada. The Rosencrantses knew something was wrong, but not yet that the Sept. 11 attacks in New York and Washington, D.C., were underway.

The flight eventually landed in Toronto and the airline put the Rosencrantses and their two new boys up in a hotel in a posh suburb outside the city — there was no room for them at the inns close to the airport.

In many ways, Scully said Rosencrants’ story fits with the focus the Catholic Church is making on family. The issue of migration and movement of people and families across the world — including the Syrian refugee crisis — are central tenants of the pope’s speeches and preachings.

“We believe as Catholics there’s a history of migration in the Bible, of course,” Scully said. “From the very first stories of Abraham fleeing into Egypt, and then St. Paul running all over creation, and people being exiled, like John who wrote the Book of Revelations. From the first story to the last story in the Bible, it’s rife with refugees. You could argue there’s a whole spirituality centered around migration. Jesus was a migrant in the sense that he came from his home in Heaven to the world.”

The Rosencrantses’ adoption journey didn’t end with their eventual return to the U.S. with their two new sons. Rather, it was just beginning. They would make more eventual trips overseas to adopt eight more children, some of whom have physical and mental disabilities.

Rosencrants eventually dropped out of college at Georgia Tech and decided to stay at home with his children while his wife worked.

“Just feeding children isn’t enough,” he said. “You have to love them. … I decided to drop out of Georgia Tech to take care of the kids. It’s better to be a father than to be an engineer.”

Their stucco home on Taylor Len Drive has become a sanctuary for children who may have otherwise never had a chance. That, also, is in line with the message Pope Francis has delivered to the world, Scully said.

“(Catholic) parishes have had a long history of being places for sanctuary, literally,” Scully said. “Sanctuary where (faith) is celebrated, or where human rights are protected. It seems to be that asylum almost goes hand in hand with sanctuary, the whole idea of the place of repose and peace and protection.”

Scully also knows the pope’s call to protect the environment — which has been controversial to some American conservatives — is important, he said. The planet should be protected not just for ourselves, he said, but also for the future generations, like the unborn child Lydia Rosencrants is carrying.

“I think he’s got some good points on climate change,” said Scully, who also remarked he feels guilty about how much trash he throws out every day. “I think (the pope’s writings) will go down in history as sort of a truth bomb, for lack of a better description. People don’t like it because it’s truthful.”

This pope has been different than his predecessors, Scully said. Pope Francis has upset some people with his calls for climate change action and concern for the poor and forgotten people in society — people with whom Jesus spent the majority of ministry, Scully noted.

“That seems to have really ruffled the feathers of a lot of people,” he said. “I think he has something new, in the sense that he’s not afraid to rely on science or take science seriously. If you look at the footnotes of Francis’ (writings), he’s got a lot of scientific reflection on it, and he’s decided to include it. I think it’s the first time we’ve seen anything like that. He’s someone who’s willing to talk concretely, and that’s Franciscan spirituality. It’s very real-world, it’s from the bottom up, which is appropriate for him because he says he was chosen from the bottom of the world, in Argentina, to come up. Science is something he’s willing to incorporate.”

At the Rosencrants home, the family has grown so large that they have to have two side-by-side dinner tables. The family spends more than $25,000 a year at Walmart alone, Rosencrants said.

“Some of that is not food,” he joked.

It takes quite a bit of financial stability to feed all those mouths, Rosencrants said, and it wouldn’t be possible without his wife’s job at LaGrange College. Not everyone is so lucky, though, Scully noted.

The pope has been increasingly vocal about issues of economic inequality and poverty, prompting anger from some conservative pundits and columnists. Some have told him to mind his own business and stay out of the matter all together. Scully disagrees.

Hard to hear or not, the Rosencrantses are devoted Christians and their faith has helped — even encouraged them in times of challenge, Rosencrants said. With their second biological child on the way — it’s a girl — Rosencrants knows in trying times, God will never abandon him, he said. Nor will he abandon his children.

“Our roles as parents are incredibly important,” he said. “We are stewards of the most incredible gift. … It’s a privilege to be a father.”