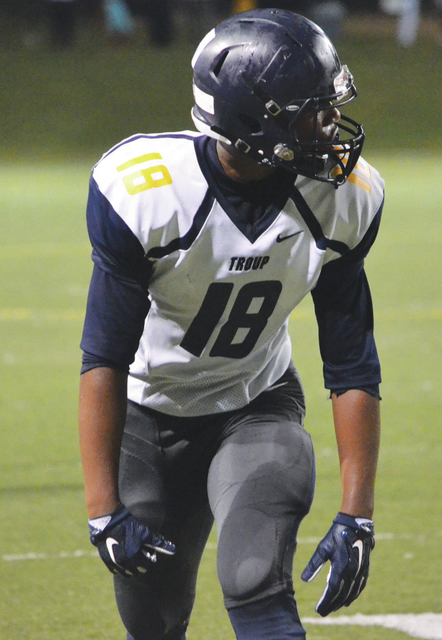 Troup’s Mess Bonner scores on a touchdown catch in the second half. Kevin Eckleberry | Daily News

http://lagrangenews.com/wp-content/uploads/sites/37/2015/09/web1_9-26-callaway1.jpgTroup’s Mess Bonner scores on a touchdown catch in the second half. Kevin Eckleberry | Daily News It was that kind of night for the Cavaliers, who built a 35-3 lead at the half on the way to a 42 -24 victory over their county rivals, the Troup Tigers.

All of Callaway’s offensive weapons were on display.

Running back Cedric Maynard, who is having an extraordinary senior season, had scoring runs of 35 and 77 yards in the first half, and he had 121 yards on his first three carries.

Braylon Sanders, a wide receiver a year ago who has grown more comfortable in his role as quarterback this season, threw touchdown passes to three different receivers.

Sanders, with the offensive line giving him all kinds of time, tossed scoring passes of 17 yards to Devin Brock, 44 yards to Dre Martin, and 19 yards to Joe Brown.

Tyrek Frazier added a touchdown run in the second half to cap the scoring for Callaway.

It was a complete performance by the Cavaliers (4-1), who have won four in a row since a season-opening loss to LaGrange.

“Braylon each week gets a little more comfortable,” Callaway head coach Pete Wiggins. “Coach (Matt) Napier is doing a great job with him and our offense. I’m just proud of those guys. And on defense, coach (Dusty) Hubbard and those guys had a good game plan coming into it, and we played fast and physical. It set our offense up a couple of times in really good position. I was really proud of our guys.”

While Troup (0-5) is still looking for its first win, there were plenty of encouraging signs to take from Friday’s game, especially from the second-half performance.

After the shaky first half, Troup came out in the final two quarters and outscored Callaway 21-7.

Tremayne Tolbert had a touchdown run, and Mess Bonner had a scoring run as well as a long touchdown catch on a screen pass from Dexter Shealey.

“I appreciate our guys’ effort,” Troup head coach Tanner Glisson said. “Our guys could have quit on our coaches tonight, and they didn’t quit on their coaches. I just told them I love them, and how much I appreciate them. If they wanted to quit, tonight was the night. They didn’t lay down.”

The first half was all Callaway.

It took the Cavaliers one offensive play to take the lead, with Maynard scoring on a 35-yard run, and Dre Martin had a two-point conversion run to make it an 8-0 game.

Troup responded with its lone scoring drive of the first half.

Shealey completed a 36-yard pass to Tolbert into Callaway territory, setting up a Michael Young 39-yard field goal, and Callaway’s lead was 8-3.

It took the Cavaliers three plays to score again.

The Cavaliers started at their own 4-yard following a penalty on the kickoff return, and on the third play of the drive, Maynard took a handoff, and he outraced the Troup defense for a 77-yard touchdown run.

Noah Stephens made the extra point, and Callaway led 15-3.

After a Troup punt, the Cavaliers only needed three plays to score again, and this time they did it with the passing game.

After a Maynard 10-yard carry into Troup territory, Sanders found a wide-open Brock for a 45-yard touchdown, and the lead was 21-3.

Following a Troup three-and-out, the Cavaliers had their second one-play drive of the game, and this time it was Martin catching a 44-yard touchdown pass on a perfectly-thrown ball from Sanders.

Later in the half, after a Troup fourth-down play failed, Callaway went 85 yards in six plays, and Sanders threw a jump-ball in the end zone to Brown, who snatched the ball away from a defender.

That made the score 35-3, which was the score at the break.

Troup recovered a fumble moments into the second half, which led to 10-yard scoring run by Tolbert.

It looked like the Tigers had scored a defensive touchdown later in the quarter, with Kelvin Thorton returning an interception about 90 yards, but that score was wiped out by a penalty.

The interception stood, though, and the Tigers ended up scoring anyway as they went 75 yards in 11 plays, with Bonner capping the drive with a 3-yard run early in the fourth quarter.

The Cavaliers answered with their only scoring drive of the second half, with Frazier finding the end zone on a 32-yard run, and it was a 42-17 game with seven minutes to play.

Back game the Tigers, who had a one-play drive of their own.

Bonner caught a screen pass from Shealey on the right sideline, and he sprinted all the way to the end zone for a 69-yard touchdown, and Callaway’s lead was 42-24 with 5:58 to play.

Callaway, thanks in large part to a 37-yard carry by Maynard, was able to run the clock out when it got the ball back.