They’ll be volleying for a good cause 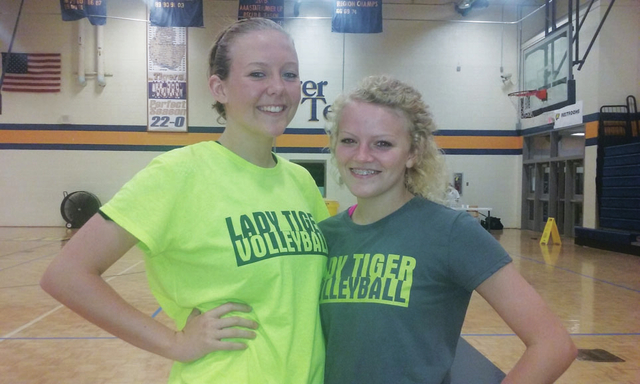 Some of Troup’s volleyball players stand with head coach Jodi Dowden, who is a cancer survivor. Kevin Eckleberry | Daily News Seniors Madison Murphy and Hanna Westcott will be on the volleyball court for Troup during Monday’s Dig Pink event, which also includes Starr’s Mill and The Heritage School. Kevin Eckleberry | Daily News

http://lagrangenews.com/wp-content/uploads/sites/37/2015/09/web1_volleyball1.jpgSeniors Madison Murphy and Hanna Westcott will be on the volleyball court for Troup during Monday’s Dig Pink event, which also includes Starr’s Mill and The Heritage School. Kevin Eckleberry | Daily News

That’s the message Troup volleyball coach Jodi Dowden was hoping to pass along when she helped create the first “Dig Pink” event in 2013.

The event was designed to not just raise money to combat cancer, but for people to support and be there for those men and women who were fighting the disease.

The third “Dig Pink” is on tap for Monday, with Troup hosting The Heritage School and Starr’s Mill in a three-team event that gets under way at 5 p.m.

“Just having hope is what it’s all about,” Dowden said.

Dowden knows how important having hope is.

Shortly after that first “Dig Pink” event, Dowden was diagnosed with breast cancer, and she had the support of not just her real family, but her volleyball family as well.

“It’s exciting to be a survivor, and help fight for people,” Dowden said. “You can do things for the direct people you’re involved with your, aunt, your uncle, your neighbor, and also as a community just inspiring people to have hope and awareness, whatever illness it is.”

One of Troup’s two seniors, Hanna Westscott, said she and her teammates were glad to be able to be there for their coach during a difficult time.

“Just seeing her down and then all of us, we talked as a team and decided we needed to keep a positive attitude for her, and make it a positive atmosphere,” Westcott said. “We knew how strong she was, and that made us all come together.”

Cancer has also directly impacted the team in another way, with senior Madison Murphy’s mother Renee White currently dealing with the disease.

It hasn’t slowed down White, who is a regular presence at the matches, is extremely involved with the team, and is one of the organizers of the “Dig Pink” day.

“To me, it really means a lot, because my mom is still fighting thyroid cancer,” Murphy said. “She comes (to the matches), and she sees all the support she has.”

As for the “Dig Pink” event, Murphy said that “means a lot, because you know people actually care.”

Dowden is hoping for a big turnout on Monday.

There will be some special events, along with a full slate of concessions, including food provided by Sloppy Pig Catering in LaGrange.

Cancer survivors will be admitted free.

“We’re just excited about this,” Dowden said. “We’re hoping to get a lot of students.”

Funds will be raised through ticket and concession sales, and Dowden said T-shirts have also been made that will be sold.

Although Callaway and Troup aren’t able to participate in the “Dig Pink” day as they did a year ago, Dowden said “the other schools have helped out with buying T-shirts.”

A year ago, Troup beat Callaway and Troup on what was an emotional evening for the players.

The day before last year’s “Dig Pink” event, Troup freshman volleyball player Megan Lindsay was involved in a car wreck, and she died a week later.

“That happened the night before our Dig Pink last year,” Dowden said. “We’re going into this with emotions all over the place, so it’s really a meaningful time for the team in a lot of different ways.”

From a competitive standpoint, things are going well for Troup right now.

On Tuesday, the Lady Tigers got a pair of big Region 5-AAAA wins over Carrollton and Fayette County.

Those wins secured the number four seed for Troup for the upcoming region tournament.

If Troup finishes fourth or higher in the tournament, it will qualify for the state playoffs.

“We’re kind of starting to hit our stride a little bit,” Dowden said. “We’re peaking at the right time.”

Looking ahead, the future looks bright for the Lady Tigers.

While Murphy and Westcott will be missed, Troup has a huge group of juniors, many of whom aren’t even to play on the varsity level.

“Half of our juniors are still playing JV,” Dowden said. “We didn’t have room for them all on varsity. So we have a lot of skill. It’s really a dogfight to see who’ll be on the varsity team this year. We’re deeper than we’ve ever been. We’ve got a lot of talent.”