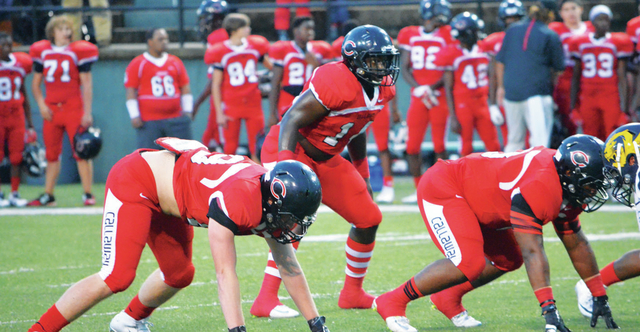 Callaway’s Cedric Maynard is congratulated by teammates DQ Wilkerson and Brandon Boddie after scoring one of his two touchdowns. Maynard ran for more than 300 yards. Kevin Eckleberry | Daily News

http://lagrangenews.com/wp-content/uploads/sites/37/2015/09/web1_9-26-callaway12.jpgCallaway’s Cedric Maynard is congratulated by teammates DQ Wilkerson and Brandon Boddie after scoring one of his two touchdowns. Maynard ran for more than 300 yards. Kevin Eckleberry | Daily News Dre Martin had a touchdown catch in the first half as Callaway built a 35-3 lead. Kevin Eckleberry | Daily News

http://lagrangenews.com/wp-content/uploads/sites/37/2015/09/web1_9-26-martin1.jpgDre Martin had a touchdown catch in the first half as Callaway built a 35-3 lead. Kevin Eckleberry | Daily News LAGRANGE – They had it all working.

The Callaway Cavaliers scored touchdowns the first five times they had the ball during Friday’s game against the Troup Tigers, and they were driving for a possible sixth score when the first half ended.

In a second half that featured a running clock, the Cavaliers were limited to one touchdown, but the damage was done and they went on to claim a 42-24 victory after taking a 35-3 lead at the half.

Running back Cedric Maynard had another brilliant game, running for 313 yards, and he scored two touchdowns and he had another touchdown wiped out by a penalty in the second half.

Devin Brock, Dre Martin and Joe Brown all had scoring catches, and Tyrek Frazier added a touchdown run in the second half.

The Cavaliers aren’t going to start throwing the ball 30 times a game, but with Frazier doing his thing and with the passing attack coming to life, they could be hard to stop as they head into region play.

“It makes it a balanced offense,” Brown said. “Everybody knows we can run the ball. They don’t know about the passing. It makes us more balanced.”

Sanders was a wide receiver a year ago, and he made enough of an impression at that position that he secured a number of college offers, including one from the University of Georgia.

Head coach Pete Wiggins and offensive coordinator Matt Napier figured he was the right guy to run the offense, though, so he was moved to quarterback during the offseason.

“Braylon each week gets a little more comfortable,” Wiggins said. “Coach Napier is doing a great job with him and our offense.”

Sanders only threw the ball five times during the first half Friday night, and he completed four of those passes for 117 yards with three touchdowns.

Maynard will continue to be the focal point of the offense, which makes sense considering he has in excess of 1,000 yards in just five games, but Sanders said the big-play ability in the passing game “takes major pressure off Cedric and his running ability. We can just spread the field out.”

As for Maynard, he has 1,115 yards on 95 carries, and he’s averaging close to 12 yards every time he touches the ball.

Troup was the latest team to, unsuccessfully, try to slow him down.

“They’re big, strong, physical, and that running back is probably the best running back we’ve played,” Troup head coach Tanner Glisson said. “He’s a heck of a running back. He’s hard to bring down. We got our hands on him and couldn’t tackle him. He’s physical, he’s big, he can run. He’s got enough speed when he gets on the edge it’s hard to catch him.”

He showed that on the Cavaliers’ first play from scrimmage when he went 35 yards for a touchdown.

Maynard’s second carry went for nine yards, and he followed that up with a 77-yard touchdown run where he out-ran everybody.

On Callaway’s third possession, Maynard had a 10-yard run for a first down, and on the next play, Sanders threw his first pass of the game, and it was a 45-yard scoring strike to Brock.

When the Cavaliers got the ball back, still in the first quarter, it took them one play to score again, with Sanders hitting Martin in stride down the field for a 44-yard touchdown.

Callaway’s final touchdown of the first half came in the second quarter.

The 85-yard scoring drive began with a 24-yard carry by Maynard, and it ended with Sanders hooking up with Brown for a 19-yard touchdown.

After Frazier had a 23-yard gain to the 19-yard line, the play call came in from Napier.

‘When coach called the play, I told (Brown) I was throwing it to him, and to just make a play,” Sanders said.

It was a jump ball in the end zone, and Brown did go up and make a play, out-leaping his defender for the touchdown.

The extra-point attempt was unsuccessful, but that was about the only thing that went wrong for the Cavaliers in the first half.

The half ended with Maynard carrying the ball for 25 yards into Troup territory, and the Cavaliers had a 35-3 lead.

Callaway’s defense did its part in the first half as well.

Troup did some nice things offensively in the first half, but it only managed a Michael Young field goal.

The Tigers made it inside the Cavaliers’ 5-yard line on one first-half possession before a failed fourth-down play.

JT Wortham said the goal was to “just own the line of scrimmage,” and he and the other defensive lineman did that.

“The defensive line has to do their job so everybody else can do their job,” Wortham said.

With the Cavaliers leading by 32 points, there was a running clock in the second half, so things went quickly.

Callaway’s first play in the third quarter resulted in a lost fumble, and later in the half, Sanders threw an interception.

Before the interception, it looked like the Cavaliers had scored another touchdown, but a Maynard scoring run was wiped out by a penalty.

Both of those turnovers led to Troup touchdowns.

Callaway scored its final touchdown in the fourth quarter.

After Maynard had back-to-back carries of 17 and 18 yards, Frazier had a 32-yard scoring run to cap the scoring for Callaway.

While there were some shaky moments in the second half, it was an impressive performance by the Cavaliers, who are off next week before opening their Region 5-AAA schedule against Cedartown.

“The kids are getting better each week, and I’m just proud of their effort, and they have a good attitude going into region play,” Wiggins said.