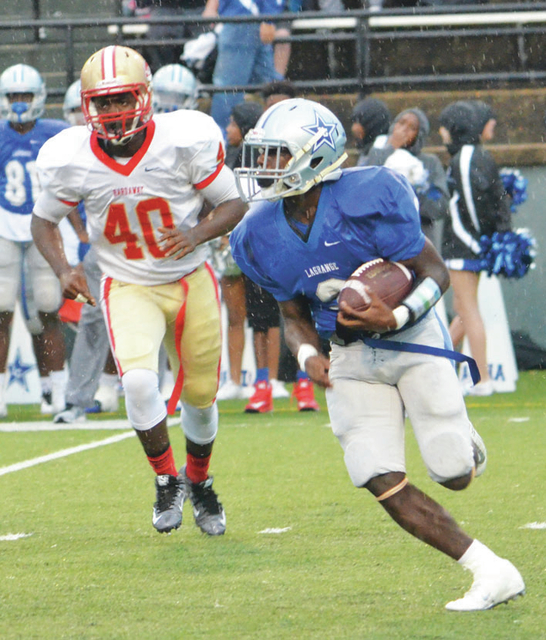 LaGrange quarterback LaPerion Perry looks for running room during last week’s game against Hardaway. LaGrange will look to move to 2-0 in region play with a road win over Columbus on Friday. Kevin Eckleberry | Daily News

http://lagrangenews.com/wp-content/uploads/sites/37/2015/09/web1_9-28-perry.jpgLaGrange quarterback LaPerion Perry looks for running room during last week’s game against Hardaway. LaGrange will look to move to 2-0 in region play with a road win over Columbus on Friday. Kevin Eckleberry | Daily News

LAGRANGE – With one region win under their belt, the LaGrange Grangers will try to make it two in a row this week.

The Grangers (3-2 overall), who overwhelmed Hardaway 49-6 last week in their Region 1-AAAAA opener, will be on the road against the Columbus Blue Devils on Friday.

Callaway and Troup are off this week, and Lafayette Christian School will look to end a three-game losing streak when it visits Shiloh Hills on Friday.

Columbus (4-1), which went unbeaten in non-region play, lost to Carver 30-3 last week in a turnover-plagued game.

There were 13 turnovers in the game, and 12 of them came in the first half.

Columbus was unable to get much going offensively, and its only points came on a field goal in the second quarter.

For LaGrange, there was no suspense in last week’s game.

The Grangers rolled past the Hawks 49-6 to jump into their region schedule in style.

If LaGrange can take care of Columbus, it would set up a huge home test against Carver on Oct. 10 in a matchup featuring two of the teams expected to compete for a region title.

Despite last week’s loss, the Blue Devils are still 4-1, and they’re off to their best start in more than 40 years.

A year ago, LaGrange beat Columbus 38-3 on the way to a third-place finish in the region.

Callaway and Troup will take a break this week as they prepare for the start of region play next week.

Callaway (4-1), which has won four in a row since a season-opening loss to LaGrange, will host Cedartown on Oct. 8 in its Region 5-AAA opener.

“The kids are getting better each week, and I’m just proud of their effort, and they have a good attitude going into region play,” Callaway head coach Pete Wiggins said.

Troup (0-5) will play its first Region 5-AAAA game at home against Woodward Academy on Oct. 9.

The Tigers are winless, but they’re hoping to build on the momentum they gained in the second half of last week’s game when they outscored the Callaway Cavaliers 21-7 in a 42-24 loss.

“I just want to us to go into region and play like we played in the second half,” Troup quarterback Dexter Shealey said. “Maybe we’ll come out better.”

Troup lost to Woodward Academy 42-24 a year ago en route to an 0-5 showing in region play.

In eight-man football, Lafayette Christian School (3-3) has lost three in a row since opening the season with three straight wins.

Last week’s 58-56, overtime loss to Central Christian was especially costly since it was the region opener.

Since only two teams from the region will qualify for the Georgia Independent Christian Athletic Association State playoffs, Lafayette Christian can’t afford another slip-up against a region opponent.