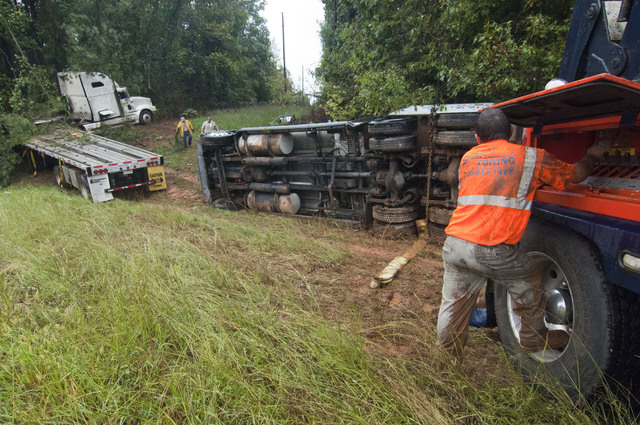 A tow truck driver prepares to pull upright a tractor-trailer that crashed Tuesday morning on Interstate 85 near mile 24. Two trucks ran off the road during rainy conditions and one driver was taken to West Georgia Medical Center after complaining of back pain.

http://lagrangenews.com/wp-content/uploads/sites/37/2015/09/web1_WEBTruckWrecks1.jpgA tow truck driver prepares to pull upright a tractor-trailer that crashed Tuesday morning on Interstate 85 near mile 24. Two trucks ran off the road during rainy conditions and one driver was taken to West Georgia Medical Center after complaining of back pain.

LaGRANGE — At least three vehicles wrecked on Interstate 85 north of LaGrange on Tuesday in what the Georgia State Patrol described as a “chain reaction” of crashes.

The driver of an SUV with bald tires ran off the southbound lanes of freeway shortly after 10 a.m. and rolled before coming to rest on an embankment, according to Trooper George Cotton of GSP. Rain may have been a factor in the wreck.

A woman and her 12-month-old child were in the SUV and the woman suffered minor injuries; the child was unharmed, Cotton said.

The ensuing traffic back-up slowed commuters and a flat-bed tractor trailer ran off the road at about 10:30 a.m. to avoid a collision, Cotton added. The driver of the truck was unharmed, but the truck jack knifed and ran into several trees adjacent to the interstate. The truck was carrying industrial engines, according to the driver.

A second tractor trailer carrying frozen food also ran onto the shoulder to avoid a collision and the truck flipped onto its passenger side. The driver of that truck was taken to West Georgia Medical Center after complaining of back pain, Cotton said.

One lane of Interstate 85 southbound was closed for more than three hours as wrecking crews worked to tow away the flat-bed truck and upright and tow the other tractor trailer.

The wrecks are under investigation by the Georgia State Patrol. The Troup County Fire Department and the sheriff’s office also responded to the scene.

Cotton said the back up of traffic is “the worst thing that can happen. We try to get these wrecks cleared up so we can get folks moving.”

GSP reminds motorists to slow down and allow extra distance between cars during rainy conditions. Georgia law requires the use of headlights during rain, even during the daytime. Drivers should check the tread on their tires and ensure they are properly inflated.

Thunderstorms may cause traffic signals to malfunction. A red flashing signal tells drivers to stop. A flashing amber signal means to exercise caution when entered the intersection. When the light is completely not working, treat the intersection as a four-way stop.