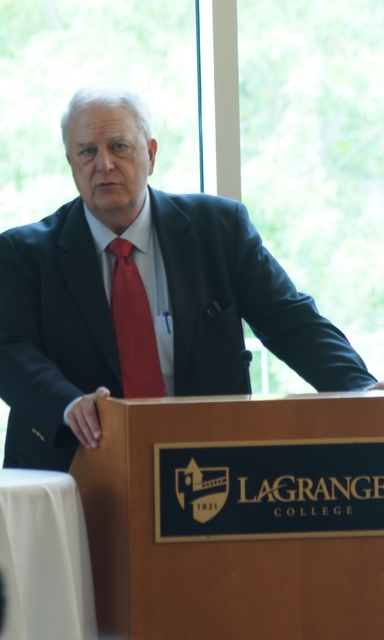 Former Gov. Roy Barnes speaks at LaGrange College about the importance of the Constitution and Bill of Rights on Thursday.

http://lagrangenews.com/wp-content/uploads/sites/37/2015/09/web1_WEB092815RoyBarnes1.jpgFormer Gov. Roy Barnes speaks at LaGrange College about the importance of the Constitution and Bill of Rights on Thursday.

LaGRANGE — Former Gov. Roy Barnes recently spoke to a crowd of LaGrange College students about the importance of the U.S. Constitution and Bill of Rights.

Why is the Constitution so important and why do citizens abide by it, Barnes asked students during the Thursday event.

He contrasted the Constitution and way of life to that of Russia and its constitution.

“If you will read the constitution of the Soviet Union,” Barnes said. “It’s great on paper. It has all these protections to speech and assembly and the ability to be safe in your home, but they don’t pay any attention to it.”

The Bill of Rights is the restrictions placed on the government, he added.

“I often say the Bill of Rights are like the 10 Commandments for government,” he said. “You shall not take my property without paying for it. You shall not convict me without fair hearing.”

Barnes said one of the most important aspects of the Constitution is freedom of speech.

“Thou (the government) shall not make me be quiet,” he said. “… If I say that you’re sorry, you can’t lock me up for it. I’m entitled to speak without censorship from you. Even if it’s wrong and inflammatory, I’m entitled to say what I want to.

Barnes went on to say that this right has been controversial, especially in areas like abortion.

He summed up his most important point with one general statement: “Government, leave thee alone. Interfere in my life only to the minimum that is necessary to keep us free. Even if I make wrong decisions, government, you do not have the right to supplant your thoughts and decisions for mine.”

Barnes acknowledged that this sounds easy, but is hard to carry out.

Barnes gave his views on how people can protect their freedoms.

Barnes also said that citizens need to be involved in the active protection of the Constitution.

Barnes then gave a modified quote from Edmond Burke: “All that is required for evil to prevail is for good men — and women (he added) — to do nothing.”

“And, unfortunately, that’s what we have in the nation today,” Barnes said. “It’s the reason we’re so polarized. It’s the reason we can’t get anybody that we like to run for higher office. … It’s because good men and women do nothing and sit by.”

The biggest problem in Georgia — and the nation — is lack of leadership, Barnes said.

Barnes also cautioned “reckless rhetoric” like that of George Wallace’s “Segregation Forever” speech that he said caused the bombing of the 16th Street Baptist Church and the death of four girls in Sept. 15, 1963.

Barnes was the 80th governor of Georgia, serving from 1999 to 2003. He is currently a lawyer at a private firm.