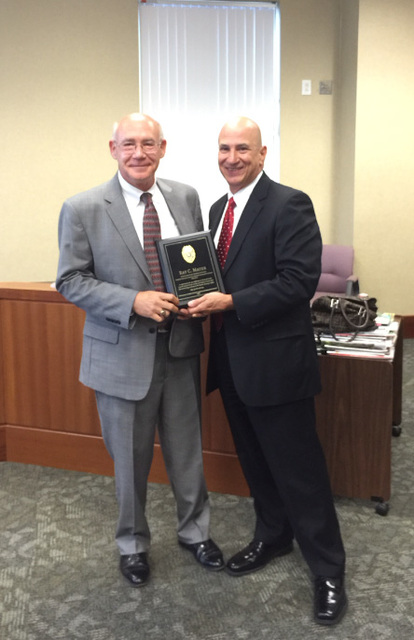 LaGRANGE — One of the hardest-hitting gang prosecutors in Troup County retired Friday after 20 years as a Georgia assistant district attorney.

Ray C. Mayer is leaving Troup County to work in Hall County, where he will continue to prosecute felonies, he said.

“I hate to see Ray go,” Skandalakis said. “I’ve had him on a number of major of cases, including a number of cold cases we successfully prosecuted. He’s the consummate professional and he’s going to be hard to replace.”

Mayer joined the circuit in 1999 after working in the Fulton County District Attorney’s Office and has established himself as an expert on the prosecution of gangs and gang-related crimes.

Working with LaGrange police, Mayer docketed 122 gang-related cases in two years and has closed 49 of them — mostly through guilty pleas.

“Of course, I would prefer he stay (in Troup),” Dekmar said. “Ray was a great resource and he worked with other law enforcement agencies to create a number of gang initiatives. People call on him from all around the state, he’s a recognized expert. … He’s given guidance in legals perspective that has resulted in a lot of cases pleading guilty.”

Both Dekmar and Skandalakis said Mayer will be difficult to replace. Skandalakis said any remaining cases that Mayer has will be split among other experienced assistant district attorneys and newer, less complicated cases will be handed to Mayer’s replacement, Jim Powers, a recent law school graduate.

“What’s going to happen is, (Chief Assistant District Attorney) Monique (Kirby) has pulled some of the more serious cases and assigned them to (assistant district attorneys) Mimi (Hymes) and Lynda (Caldwell),” Skandalakis said. “She’s then taken some of the other cases from Lynda and Mimi that are less serious or less complicated and detailed, and assigned them to the rookies. The rookies will have more cases, but the high-profile cases will go to my serious will go to my (assistant district attorneys).”

Skandalakis said he’ll remember Mayer for his willingness to help his younger, less experienced co-workers, and his openness to learning new technologies as times changed.

“There are so many good stories about Ray,” Skandalakis said. “It’s amazing how the D.A.’s offices have changed over the years. One of the things that was funny was bringing him into the 21st century. He was always meticulous and thorough. When Ray came into the 21st century, he decided he wanted to use PowerPoints in jury trials, and we were afraid the computers would not sustain his ear. It was always a joke that he could unleash some colorful language on computers, but he’s definitely picked up some of the technology and ran with it. He had legendary conversations with his computers, and they’re quite colorful.”

Mayer said he enjoyed his time with the Coweta Judicial Circuit.

“Of my time here, I have tried over a hundred felony cases,” Mayer said. “My fondest memories, other than of the wonderful people with whom I have had the privilege and pleasure to work — especially Pete, who probably is the most highly regarded district attorney in the state — have been of the cold case murders I successfully tried.”

Mayer is a graduate of the Citadel, a military college in Charleston, South Carolina, and of Mercer Law School. He served in the U.S. Army during which he worked with armored tanks and was discharged as a captain. His wife, Julie, also worked for the Coweta Judicial Circuit as a victim advocate. He has one son, Wes, who until recently was a reporter for the Newnan Times-Herald. Mayer has three step-children and three grandchildren.