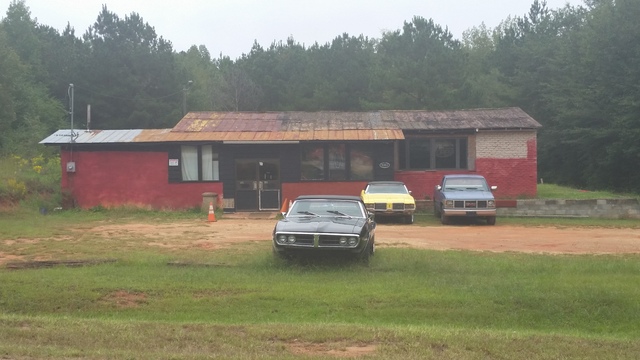 The Hill Haven Event Center – formerly known as Club CJ – was the scene of a mass shooting just before 3 Sunday morning. The Meriwether County Sheriffs Office said 10 people were shot when a verbal altercation over illegal gambling escalated in a back room of the building. Sheriff Chuck Smith said no one was seriously hurt. Eight of the 10 victims are from Troup County.

http://lagrangenews.com/wp-content/uploads/sites/37/2015/09/web1_WEB0929ClubShooting.jpgThe Hill Haven Event Center – formerly known as Club CJ – was the scene of a mass shooting just before 3 Sunday morning. The Meriwether County Sheriffs Office said 10 people were shot when a verbal altercation over illegal gambling escalated in a back room of the building. Sheriff Chuck Smith said no one was seriously hurt. Eight of the 10 victims are from Troup County.

GREENVILLE — The Meriwether County Sheriff’s Office said Monday afternoon that the investigation continues into a weekend shooting that injured 10 people at a former Greenville nightclub at 1140 Hill Haven Road.

“Once our patrol units arrived on the scene they discovered that they had three individuals at the location that had been shot,” Smith stated. “As the investigation continued to unfold, we learned that there were additional individuals that had left the location by personal vehicles and went to area hospitals for treatment of gunshot wounds.”

Smith said a total of 10 people were shot during an altercation that allegedly involved illegal gambling in the back portion of the building.

According to Smith, victims were shot in their arms, legs, feet, shoulders and one person was grazed in the head by a bullet. He said none of the injuries were life-threatening and all victims were treated and released from area hospitals.

While the sheriff’s office declined to name any of the victims, Smith said eight were from Troup County. The victims ranged in age from 16 to 29 years old, five were female and five were male.

The Georgia Bureau of Investigation was called out to help process the crime scene, while Meriwether County investigators interviewed victims and eyewitnesses to determine what led up to the shooting spree.

“Our investigators determined through witness statements that an altercation occurred involving several subjects over illegal gambling … The verbal altercation escalated with at least several suspects pulling handguns and firing multiple rounds within the confines of the building,” stated Smith. “These indiscriminate shots resulted in multiple individuals being struck. Many of the patrons of this establishment fled the scene prior to law enforcement arrival.”

Investigators are tracking down leads in search of the alleged gunmen in the incident, Smith added.

The sheriff also said their investigation revealed the Hill Haven Event Center was in violation of its permit of operation through the county building and zoning codes.

“It is evident that the location is not operating within the confines of its operational license. The majority of these persons shot are not residents of Meriwether County, Georgia,” Smith stated. “No community should be subject to this type of violence and my agency is going to (do) all that we can under the law to prevent this from occurring in this community again. I am requesting that the county government close this facility from further operation at this time.”

The Daily News went to Hill Haven Event Center on Monday morning. While voices could be heard inside the building, the doors were locked and no one answered after continous knocking on the door. No one had returned phone calls as of press time this morning.

Smith said the case is still an active investigation.

Anyone with any information about the shooting was asked to call the Meriwether County Sheriff’s Office at 706-672-4489.