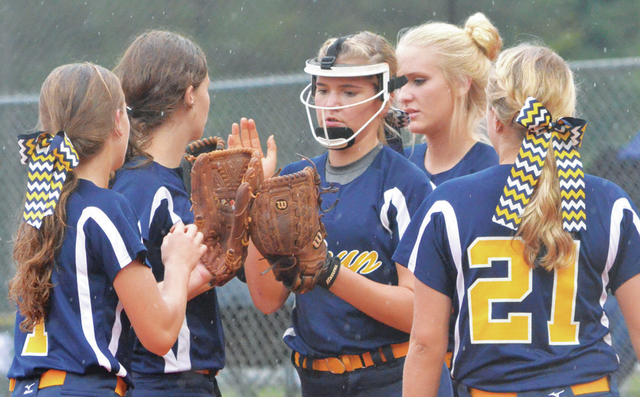 The Troup Lady Tigers will visit Whitewater on Wednesday as the Region 5-AAAA softball tournament gets under way. Kevin Eckleberry | Daily News

LAGRANGE – The Troup Lady Tigers know they’re going to be playing in the state softball tournament.

What has yet to be determined is whether they’ll be seeded first, second, third or fourth by the time the state playoffs get under way.

Troup is one of four teams participating in the Region 5-AAAA tournament, and those teams will be competing to determine the seeding position for state.

First up will be a pair best-of-three series this week pitting top-seeded Carrollton against fourth-seeded Woodward Academy, and second-seeded Whitewater against third-seeded Troup.

Next week, the two teams that win their first-round matchups will meet in the championship series, and the other teams will play for third place.

Troup will play a doubleheader at Whitewater on Wednesday at 5 p.m., and if needed, a third and deciding game would be Thursday.

In the first meeting, which was played at Troup, Whitewater rolled to a 9-1 victory.

The second time the two teams played it was competitive the whole way, with Whitewater hanging on for a 4-2 victory on its home field.

Troup led 2-0 before Whitewater rallied for the win.

Troup also lost both games to Carrollton in the regular season.

After losing the first game to Carrollton 6-0, Troup hung tough the whole way a week ago and lost 8-5.

Troup head coach Blair Shimandle believes those two games last week, even though they were losses, were important for the mindset of her players, who now know they can compete with Carrollton or Whitewater.

“Last year, we struggled toward the end (of the regular season),” Shimandle said. “This year, our record is kind of similar, but we’re playing better. Really, we played Carrollton and Whitewater better this time around than we did the first time. We’re definitely in a lot better shape than last year.”

Whatever happens, Troup is headed to the state tournament for the second straight year.

Also this week, LaGrange is set to complete its Region 1-AAAAA schedule.

LaGrange was supposed to play a doubleheader against region foe Hardaway on Monday, but those games were rained out.

Those games have been re-scheduled for Wednesday at LaGrange, with the first game set for 4 p.m.

LaGrange’s final region game, and its last regular-season game, is scheduled for Thursday at home against Harris County.

At 4-5 in the region, LaGrange is in fourth place behind Columbus, Northside and Harris County.

If LaGrange finishes fourth or higher in the seven-team region tournament, it will qualify for the state playoffs.

Callaway will finish its Region 5-AAA schedule with a road game against Central-Carroll today.

Callaway is 1-8 in the region, and no matter what happens today, it will be the sixth seed for next week’s region tournament.

Central is in second place in the region at 7-2.

The first time the two teams played, Callaway overcame an early 4-0 deficit to pull even at 5-5, but Central scored a run in the seventh inning to win 6-5.

Callaway is scheduled to finish the regular season at home against Temple on Wednesday, and that will be senior day.