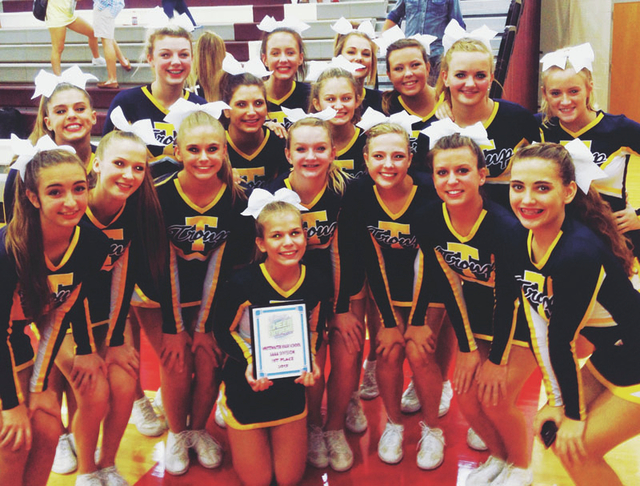 The members of the Troup High competition cheerleading team have lofty ambitions for this season according to coach Amelia Keys.

“Their goal is to make it to the state finals and be fighting for that state championship, and they absolutely have the potential to that, if we can keep them healthy, and keep the end goal in sight,” Key said.

So far, the team has the look of a team capable of doing some big things when state time rolls around.

After finishing second in the season-opening East Coweta Invitational, Troup was the top Class AAAA team during the Whitewater Cheer Extreme Invitational on Saturday.

Troup will look to keep it going this weekend with a competition at the University of West Georgia.

After taking a week off for fall break, the team will have three more competitions before the region meet on Nov. 7, and the weekend after that the state meet will be held in Columbus.

Key said the team’s routine is a challenging one.

“They’re at the maximum difficulty level in their stunts and pyramids, so they’re putting on quite a show,” Key said. “It’s a hard routine. They’re doing very well with it.”

That hasn’t happened by accident.

Key said all of the team members have been giving everything they have to make the performance as strong as possible.

“They’ve come in since the summer and worked amazingly hard and have been very dedicated to performing,” Key said. “They’re practicing five days a week, and cheering on Friday nights and competing on Saturday. There’s no doubt they’re putting in the hours.”

In the Whitewater competition, Troup did a nice job of carrying on after one of the team members suffered an ankle injury last week.

“We’ve lost one to an ankle for a couple of weeks,” Key said. “Winning first place Saturday was a big deal because we fixed the routine Thursday afternoon and just put it in.”