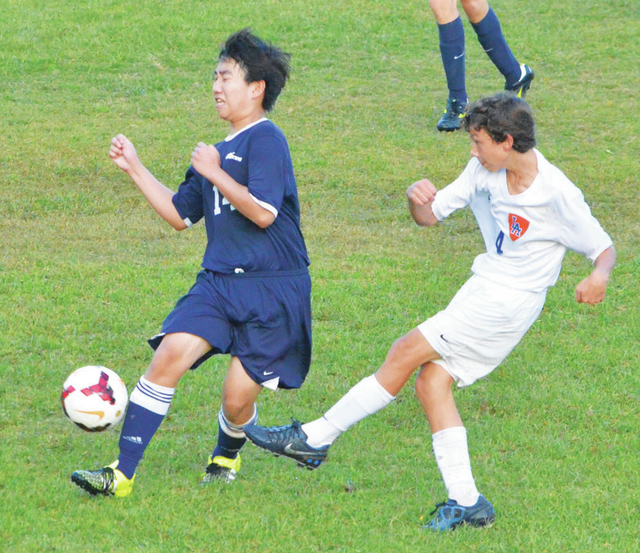 LaGrange Academy’s Griffin Sanchez gets a shot away during the second half of Tuesday’s game. Kevin Eckleberry | Daily News

http://lagrangenews.com/wp-content/uploads/sites/37/2015/09/web1_9-30-soccer5.jpgLaGrange Academy’s Griffin Sanchez gets a shot away during the second half of Tuesday’s game. Kevin Eckleberry | Daily News

In the 2013 and 2014 seasons, the LaGrange Academy Warriors finished second in their region, and they went on to play for the Georgia Independent Christian Athletic Association state soccer championship both seasons.

The Warriors are hoping history repeats itself this year.

LaGrange Academy had a chance to win a region title on its home field on Tuesday, but it lost to Furtah Prep 6-3.

The Warriors have two regular-season games remaining, and they’ll be at home next Tuesday for the first round of the eight-team state tournament.

LaGrange Academy will need to win two playoff games to make it back to the championship game, perhaps to play Furtah Prep for a third time.

In their first meeting this season, LaGrange Academy and Furtah Prep fought to a 5-5 tie.

“That’ll be the third year in a row we end up second in our region,” said LaGrange Academy coach Mike Petite. “But twice before we reached the state-championship game as the number two seed coming out of our region.”

LaGrange Academy lost to a powerful Trinity Christian in the 2013 and 2014 state-championship games.

Trinity is no longer in GICAA, opening the door for a new team to capture a title.

Despite Tuesday’s disappointing loss, the Warriors figure to be one of the teams to beat.

Before falling to Furtah Prep, they notched impressive wins over Oak Mountain and Brandon Hall to sew up the region’s second spot and secure a home playoff game.

LaGrange Academy wraps up the regular season with a home game against North Georgia on Thursday, and a road game against Academe of the Oaks on Friday, and then it’s playoff time.

In Tuesday’s game, things started out well for the Warriors, with Zach Callaghan scoring his 19th goal of the season to give his team a 1-0 lead.

After notching the tying goal, Furtah scored three goals in a 10-minute span to build a 4-1 lead.

“They had a ton of chances in the first half and capitalized on them,” Petite said.

The Warriors hung tough and got within two on a goal by Mason Brown in the 45th minute.

After Furtah Prep added another goal to go up 5-2, Jake Keeble scored one minute later, and it was a two-goal game once again.

The Warriors continued to threaten, but they were unable to manage another goal, and the Falcons scored a late goal to complete the scoring.

Will Trotter had three assists for the Warriors.

“We fought back,” Petite said. “We changed our formation in the second half, and that helped. We got more aggressive, we were a little more physical, and we started to generate a lot more chances.”

While pleased with the way his team hung in there, Petite said his team made too many mistakes to beat a quality team like Furtah Prep.

“That’s a good side,” Petite said. “They’ve got some talented individuals, and they work hard. We made enough mistakes throughout the game and they capitalized on every one.”