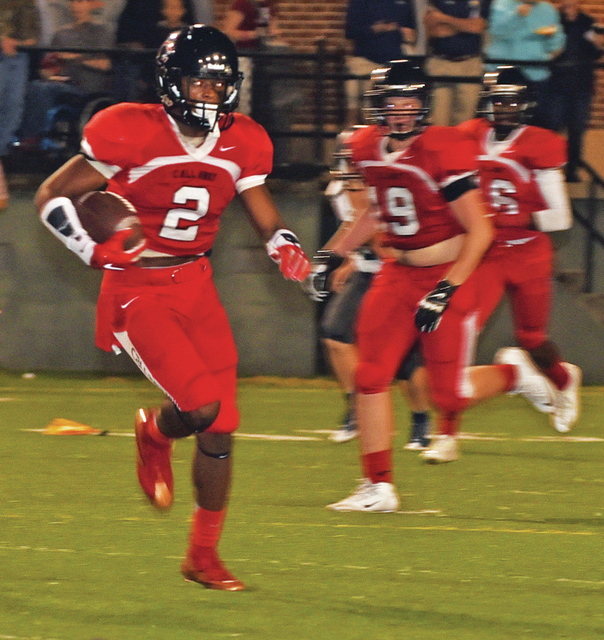 Callaway’s defense makes a play on Troup quarterback Dexter Shealey during last week’s game. The strong performance of the defense is a key reason why the Cavaliers are 4-1. Photo by Eddie Sherrer

http://lagrangenews.com/wp-content/uploads/sites/37/2015/10/web1_10-1-CHS1.jpgCallaway’s defense makes a play on Troup quarterback Dexter Shealey during last week’s game. The strong performance of the defense is a key reason why the Cavaliers are 4-1. Photo by Eddie Sherrer Callaway’s Cedric Maynard ran for more than 300 yards against Troup last week, and he is on pace to run for more than 2,000 yards in the regular season. Photo by Eddie Sherrer

http://lagrangenews.com/wp-content/uploads/sites/37/2015/10/web1_10-1-CHS3.jpgCallaway’s Cedric Maynard ran for more than 300 yards against Troup last week, and he is on pace to run for more than 2,000 yards in the regular season. Photo by Eddie Sherrer Dre Martin has been a standout all-around player for Callaway this season as a linebacker, wide receiver and kick returner. Photo by Eddie Sherrer

http://lagrangenews.com/wp-content/uploads/sites/37/2015/10/web1_10-1-CHS2.jpgDre Martin has been a standout all-around player for Callaway this season as a linebacker, wide receiver and kick returner. Photo by Eddie Sherrer

LAGRANGE – For the Callaway Cavaliers, not a whole lot went right in the season opener against the LaGrange Grangers.

From the 20-plus penalties, to the costly turnovers that led to touchdowns, to the inability of the defense to corral LaGrange quarterback LaPerion Perry, it was a forgettable night for the Cavaliers, who lost 45-20.

While just about everything went wrong in that first game, it has been nothing but good times since then for the Cavaliers, who have won four in a row to improve to 4-1.

Callaway followed up the loss to LaGrange with wins over B.E.S.T. Academy, Heard County, Harris County and Troup.

Callaway is off this week, and it will return to the field on Oct. 8 for its Region 5-AAA opener against Cedartown.

“Looking at the big picture, this non-region schedule that we’ve played I feel like has prepared us for the region,” Callaway head coach Pete Wiggins said. “We always kind of look at our season as two (halves). Our non-region schedule is over, and it’s time to get started with the region.”

In their final non-region game, the Cavaliers beat the Troup Tigers 42-24 last week after taking a 35-3 lead at the half.

It was a complete performance by the Cavaliers, who scored touchdowns the first five times they touched the ball while limiting the Troup offense to a field goal in the first half.

Callaway’s defense, which has made great strides since the opener, was led by linebacker Javoski Leverette, who had 11 tackles with a sack, and he has been in double digits in tackles in every game this season.

Leverette missed the 2014 season with a broken leg, but he has come back strong this year.

The Callaway defense that was on the field against Troup had a different look to it than the defense that took on LaGrange.

Since that game, some players have moved around, and that has made the defense perform at a higher level according to Hubbard.

“We’ve made about four or five changes, putting guys in different places,” Hubbard said. “Dre (Martin) has moved from safety to outside (linebacker), Dylan (Johnson) has moved from outside to safety, Devin Brock has gone in and played inside (linebacker) now. He didn’t play much in the first game. We were still kind of unsettled at sam linebacker, and we’ve kind of settled in there.”

Hubbard said things really started to take a turn for the better in the third game against Heard County when the Cavaliers didn’t allow a point in the second half of a 20-17 victory.

“Since the second half of Heard County, I thought we’ve played pretty good,” Hubbard said.

One of the players who has shifted positions is Martin, who is enjoying life as a linebacker after beginning the season as a secondary player.

Martin was effective at safety, but he’s a physical player, and he enjoys the contact that comes with being a linebacker.

Martin and Brock have settled in as the outside linebackers, and Leverette, Jabreel Jackson, Brandon Boddie and Thomas Hodge have been getting it done at inside linebacker.

Jackson had eight tackles, including seven solo stops, during the win over Troup.

Callaway’s defensive line has remained the same since the start of the season, and that unit has performed well each week.

Senior JT Wortham, who Wiggins said “plays with so much intensity,” leads the defensive line, and Keegan Ramsey, Rashawn Lovelace and Keegan Woods have been getting it done as well.

Lovelace had a big game against Troup with seven tackles from his defensive-tackle position.

Wortham said the goal of the defensive line is to “just own the line of scrimmage” and oftentimes that means taking on offensive linemen so the linebackers can come in and collect the tackles.

“The defensive line has to do their job so everybody else can do their job,” Wortham said.

Johnson has thrived since moving from linebacker to safety, and Hubbard figures he’ll be even more effective now that he won’t have to wear a cast that he’s had to deal with the past few games.

“He’ll only be better now that he got that big cast off,” Hubbard said.

Cast or no cast, Wiggins said Johnson has been one of the top defensive players on the team.

“Week in and week out, he’s so consistent, and he plays so physical and runs to the ball,” Wiggins said.

Dominique Copeland and Tyrek Frazier have also excelled in the secondary.

Callaway’s offense has been dynamic, especially when Maynard has the ball in his hands.

He’s averaging close to 12 yards per carry, and he’s a threat to score a touchdown every time he touches the ball, no matter where the ball is on the field.

“You watch him on film, and he makes so many yards after the first hit,” Wiggins said. “He keeps moving his feet, and he’s such a strong kid, and has just a good attitude. But he always gives credit to those guys up front.”

The men up front include senior Cortney Laye, who has anchored the offensive line this season.

“Those kids did a great job of opening holes and running lanes and just giving (Maynard) a crease, and that’s all he needs,” Wiggins said.

Fullback Brandon Boddie has also been a big part of the running game whether he’s carrying the ball, or providing blocks.

The wide receivers also do a nice job of providing downfield blocks on Maynard’s long carries.

“They’re expected to block,” Wiggins said of the wide receivers. “A lot of times when we are running it more, there’s not a lot of glory in it. They just have to go out and get the job done just like an O-line.”

One of those receivers is Martin, who was the quarterback for the first half of the 2014 season.

Heading into this season, Martin was moved to wide receiver, and he has done a superb job catching balls from Sanders.

Martin said Sanders, a standout wide receiver a year ago, has grown more and more comfortable with the passing part of the game.

“He’s learning the offense,” Martin said. “He knows the defenses now. He can pick them apart.”

With the offense putting up big numbers and an ever-improving defense getting it done, Callaway has high hopes for the rest of the season.

“If we keep working, anything’s possible,” Martin said. “We want to win region, and we want to win state, too.”