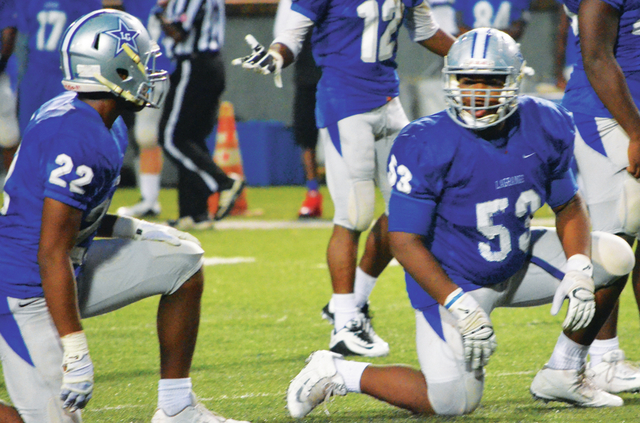 LaGrange’s defense gets in position during last week’s game against Hardaway. A defense with a bunch of new starters has played well this season. Kevin Eckleberry | Daily News

http://lagrangenews.com/wp-content/uploads/sites/37/2015/10/web1_10-2-football2.jpgLaGrange’s defense gets in position during last week’s game against Hardaway. A defense with a bunch of new starters has played well this season. Kevin Eckleberry | Daily News LAGRANGE – Defense was a major question mark coming into the season for the LaGrange Grangers.

As LaGrange took the field for its season opener against Callaway, the defense was filled with new starters, most notably on the defensive line.

The Grangers (3-2 overall) came out and delivered a stellar defensive performance that night against the explosive Cavaliers in a 45-20 victory, and the defense has continued to be a bright spot since then.

LaGrange will look to keep it going tonight when it travels to Memorial Stadium to play the Columbus Blue Devils in a Region 1-AAAAA game.

Columbus, which began the season with four straight wins, lost to Carver 30-3 a week ago in its first region game.

LaGrange’s defense has played well in every game this season, even in the two losses to Spalding County and Mary Persons.

Spalding County and Mary Persons, who are a combined 10-0, were each held to a season low in points against LaGrange.

The other three opponents on LaGrange’s schedule, Callaway, Troup and Hardaway, scored a combined 33 points.

“I’m very pleased with their effort, and the way they fly to the ball,” said Marvin Kendricks, LaGrange’s defensive coordinator.

Perhaps the biggest area of concern coming into the season was the defensive line.

A defensive line anchored by senior Emmanuel Mann has been dominant this season, though.

Juniors James Clark, Johnathan Olajubutu and DeAndre Pollard have all stepped into starting roles this season and played extremely well, and Keaote Davis has been a force on the defensive line as well.

“Every year it seems like we’re putting a first-year defensive end on the field, which is not always good,” Kendricks said. “But Pollard, and James Clark are stepping up and playing football.”

One area where the Grangers had experience was at the linebacker position, with Bobby Willoughby and Jeremiah Wright returning as seniors.

Willoughby is the team’s leading tackler this season, and he had a team-best 12 tackles against Hardaway.

One of LaGrange’s breakthrough defensive players is senior linebacker Dominique Copeland, who had a 16-tackle performance in the Mary Persons game.

Daz Williams has excelled at linebacker, and senior Derieko Smith anchors the defensive backfield and he has a pair of interceptions, including one that was returned for a touchdown, although the score was negated by a penalty.

Whoever is making a tackle rarely does it by himself.

Kendricks said gang tackling is “something we emphasize during practice,” with a number of different drills.

As for today’s game, Kendricks has been preparing the defensive players to face Columbus’ option offense.

Columbus is led by Ty Lucas who has 302 yards on 45 carries with four touchdowns, and Essang Bassey has 237 receiving yards to go along with 258 yards on the ground.

“Columbus is a way better team then they’ve displayed in the past,” Kendricks siad. “Especially what they do offensively, you have to play disciplined football, and everybody’s got to make sure they participate in their keys with the option. If you’re a dive player, you’ve got to play the dive. If you’re a pitch player, you’ve got to play that. That’s what we’ve been doing all week is just getting prepared for that.”