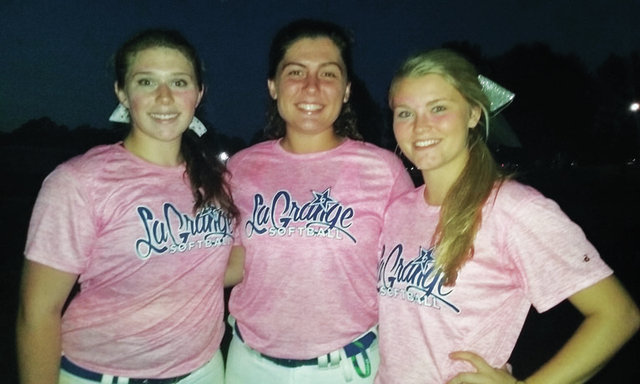 LAGRANGE – They savored the moment, mainly because there won’t be many more of them to come.

On a pleasant fall evening at LaGrange High’s softball complex, Miranda Hamer, Cassidy Creed and Leighton Parker shared a softball field once again, something they’ve done dozens of times over the past five years, counting their eighth-grade seasons when they were junior-varsity players.

On Wednesday, they were on the field, together once again as LaGrange played a home doubleheader against Hardaway.

For Hamer, Creed and Parker, the end of the road is near.

The Lady Grangers have one more regular-season game to play today against Harris County, and then it’s on to the Region 1-AAAAA tournament.

If LaGrange finishes fourth or higher in the region tournament, it will advance to the state playoffs.

The seniors are all hoping to make one final appearance at state before it’s time to hang up the uniform for good.

“It’d be a nice ending to my senior year,” Hamer said. “I don’t want to go play college ball, so getting to go to state would be special. It’d be nice.”

LaGrange has qualified for the state playoffs the past three seasons, and Parker said making it back is a major goal for the seniors.

“Since we were freshmen we’ve accomplished that every single year, and we’d like to continue that tradition,” Parker said.

Creed said she has had a great time playing softball at LaGrange for the past four seasons, and she calls her teammates “an extended family.”

“We wake up, go to school, come here after school, and then stay here until 6 (for practice),” Creed said. “It’s tough, but we love it.”

All three of the seniors said they have tried to be there for the younger players, offering support or advice when needed.

“That’s been fun too, just to help them out and kind of help them have the experience we had as freshmen,” Parker said.

Creed remembers when she was a freshman and how much she respected some of the veteran players, including Karsin Spinks and Emily Anderson.

“You know they look up to you, because I looked up to Karsin and Emily,” Creed said. “You want to do the best you can for them.”

Creed said the team that beat Hardaway on Wednesday is “200 percent better” than it was at the beginning of the season, and she gives a lot of credit for that to the development of the younger players.

“We have girls going from not being able to hit, to hitting better than me, and I’ve been playing ball since I was 8,” Creed said. “It’s amazing. It’s amazing to see how far they’ve come. They’re like little sisters.”

Hamer said she will treasure the memories she has made as a LaGrange softball player forever.

“It’s been fun,” she said. “I’ve grown up with all these girls. I’ve made a lot of memories I’ll take with me the rest of my life. It’s been lots of fun, life-changing.”