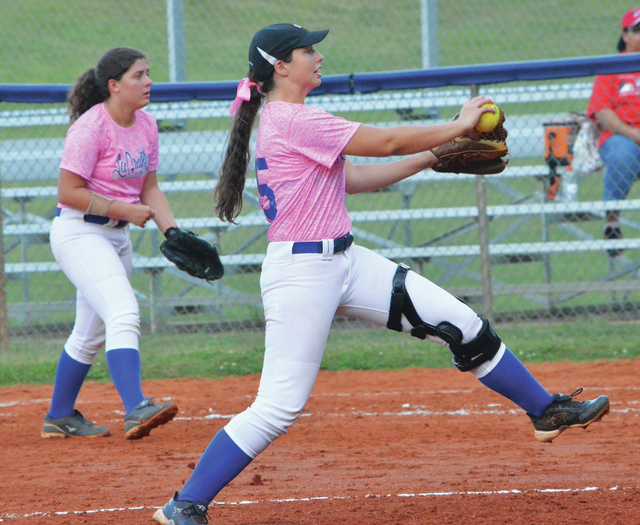 LaGrange’s Hannah Karcher slides safely into second during the second game of a doubleheader against Hardaway on Wednesday. Kevin Eckleberry | Daily News

http://lagrangenews.com/wp-content/uploads/sites/37/2015/10/web1_10-1-LHS1.jpgLaGrange’s Hannah Karcher slides safely into second during the second game of a doubleheader against Hardaway on Wednesday. Kevin Eckleberry | Daily News McLain Skinner didn’t allow a run and struck out 10 batters in a 5-0 victory over Hardaway. Kevin Eckleberry | Daily News

http://lagrangenews.com/wp-content/uploads/sites/37/2015/10/web1_10-1-LHS3.jpgMcLain Skinner didn’t allow a run and struck out 10 batters in a 5-0 victory over Hardaway. Kevin Eckleberry | Daily News

LAGRANGE – They took care of business.

The LaGrange Lady Grangers came into Wednesday’s softball doubleheader against Hardaway with a chance to sew up the number four seed for the Region 1-AAAAA tournament.

LaGrange made it happen, although Hardaway made things interesting in the second game.

In the first game, Hardaway had no answer for LaGrange pitcher McLain Skinner, who threw a shutout in a 5-0 victory.

In the second game, LaGrange held on for an 8-5 win after Hardaway brought the tying run to the plate in the top of the seventh inning.

Lauren Kuerzi had three hits in the second game, including her fifth home run of the season.

LaGrange improved to 6-5 in the region heading into today’s regular-season and region finale against Harris County.

In the first game against Hardawy, LaGrange didn’t need much offense the way Skinner was throwing.

Skinner gave up four hits and one walk, and she struck out 10 batters.

Kedaysha Griffin had the big hit for LaGrange, a bases-loaded single in the second inning that brought in two runs.

Shaq Sutton also drove in a run for LaGrange.

In Game 2, LaGrange jumped out to a 2-0 lead with a pair of runs in the bottom of the first inning.

Destiny Fitzpatrick drove in a run with a groundout, and Hannah Karcher had an RBI double.

After Hardaway tied it, Kuerzi put LaGrange back on top with a solo home run in the third inning.

After Fitzpatrick singled and Sutton reached on an error, Karcher came through with her second double of the game, and this was brought in two runs to push the lead to 5-2 through three innings.

After Hardaway scored a run to get within two, LaGrange notched three insurance runs in the bottom of the sixth.

With a pair of runners on, Kuerzi and Patrick had back-to-back RBI singles, and LaGrange’s lead was 8-3.

Those runs turned out to be important after Hardaway scored twice in the top of the seventh, and there were two base runners on when Skinner got the final out to get her second complete-game victory of the day.

VOLLEYBALL: LaGrange High has secured the number four seed for the Region 1-AAAAA tournament that will begin on Tuesday at Northside High.

LaGrange’s first match in the seven-team, double-elimination tournament will be against fifth-seeded Shaw at 6 p.m. on Tuesday, and the winner of that match will face top-seeded Columbus at 7 p.m.

The tournament will wrap up on Thursday at Columbus High.

Columbus is the number one seed followed by Northside, Harris County, LaGrange, Shaw, Carver and Hardaway.

Only the top three teams will qualify for the state tournament.

In the men’s game, it was Maryville capturing a 9-0 victory.

LaGrange College’s teams will be at home against Covenant on Saturday, with the women’s game beginning at 5 p.m., and the men’s game to follow at 7 p.m.