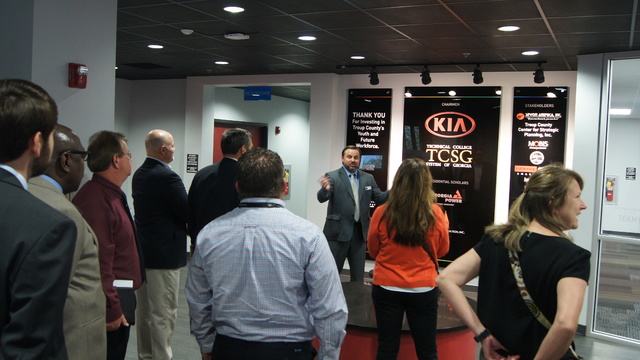 LaGRANGE — Members of the Region 4 Georgia Department of Education gathered at the THINC College and Career Academy and the Kia training facility Thursday for a workshop concerning future workforce development, career academies and to tour both facilities.

Jamie Jordon, program manager for the High Demand Career Initiative, which is part of the Georgia Department of Economic Development, spoke about the careers with the highest demand throughout the state. Manufacturing topped the list with jobs like engineering, industrial maintenance and welding falling into the category, he said.

Second and third were healthcare and information technology.

The THINC Academy offers classes for high school students that provides hands on learning in manufacturing, healthcare and information technology.

Page Estes, president of the LaGrange-Troup County Chamber of Commerce, talked about the local workforce. Estes said LaGrange is a hub for industry for west Georgia and east Alabama.

During lunch, education leaders met at the Kia training facility to listen to a panel made up of several community leaders from throughout Region 4, including from Kia Motors and other leading industries in healthcare, communication, education and manufacturing.

During a question-and-answer session, the panel was questioned about what students are lacking when entering the workforce.

Lana Mobley, vice president of commercial sales for NuLink, spoke about soft skills being a challenge when hiring new employees.

“In terms of hiring the younger folks … they think they know technology. They are social media experts, they text and everything,” Mobley said. “But number one, they can’t communicate, generally with an adult — or a lot of them can’t. So we have to help them through that, the soft skill of being able to communicate and work with your coworkers without texting them. But also, in an office environment, they’re not as familiar with Excel and PowerPoint and some of the Microsoft Office products.”

Other jobs Jordon noted were in high demand in Georgia include nurses, physical therapists and other careers in the healthcare industry.

A new industry in Georgia was the fourth highest-demanded. The film, TV and interactive entertainment industry has seen great success in recent years, Jordon said. The industry brings in $4 billion to $5 billion a year.

Jordon went on to say that the industry employs people in jobs that include set designers, stunt team members and costume designers.

Region 4 consists of 10 counties from the west central Georgia area, including Troup.