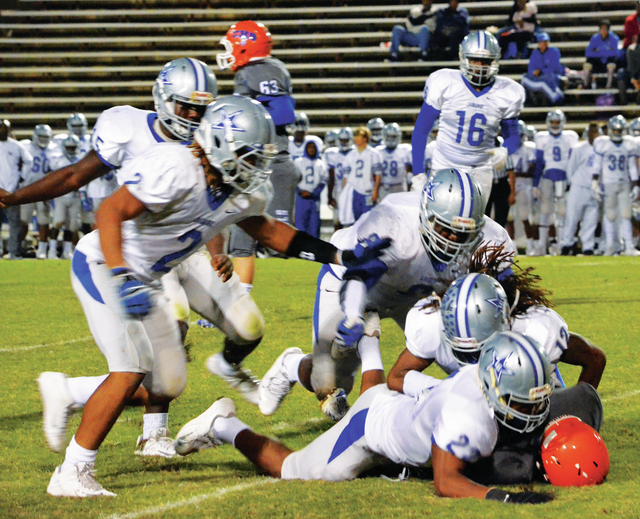 COLUMBUS – As the Columbus Blue Devils took the field at Memorial Stadium on Friday night, it had been nearly 50 years since they’d beaten the LaGrange Grangers.

The resurgent Blue Devils can cross that off their to-do list.

Columbus built a 14-0 lead in the second half and then withstood a late LaGrange rally to win the Region 1-AAAAA showdown 21-13.

The Grangers (3-3) fell to 1-1 in the region heading into next Saturday’s game against Carver, while Columbus (5-1) improved to 1-1 in region play.

Trailing 14-0 in the fourth quarter, the Grangers made things interesting.

With 10:43 to play in the game, Keaote Davis’ 2-yard touchdown run and the extra point cut the Columbus lead to 14-7, and there was plenty of time remaining.

Columbus came right back with a touchdown drive of its own, though, to push the lead back to 14 points.

LaGrange answered with a 76-yard scoring drive that was capped by a 7-yard touchdown run by Undriel Copeland, and after an unsuccessful two-point try, Columbus led 21-13 with 5:38 to play.

The Grangers desperately needed a defensive stop, and they made it happen, giving the ball back to the offense with more than three minutes to play.

It looked like the Grangers had hit on a big play when LaPerion Perry tossed a long completion to Mike Hardy deep in Columbus territory, but a holding penalty wiped that play out.

On the next play, Columbus got an interception, and LaGrange’s fate was all but sealed.

The Grangers got the ball back deep in their own territory following a punt with less than 10 seconds, and the game ended on an incomplete pass.

It was a huge win for Columbus, which is off to its best start in more than 40 years, and it beat LaGrange for the first time since 1967.

For the Grangers, it was a setback, but they still have four region games remaining as they look to sew up a state-playoff spot.

Columbus had the only points in the first half.

In the first quarter, Derrick James connected with Essang Bassey for a 62-yard touchdown pass, and the extra point gave the Blue Devils a 7-0 lead, and that was the score at the half.

The Grangers threatened to break through on their first possession of the second half.

They had the ball inside the Columbus 5-yard line, but a fourth-down play came up short, and the Blue Devils took over at their own 2-yard line.

The Blue Devils quickly got out of the shadow of their own end zone with James completing a 48-yard pass to Bassey, and James later threw a 5-yard touchdown pass to Josh Lee to cap a 98-yard drive.

The Grangers were in a position where they almost had to score, and they did.

LaGrange went 77 yards in 14 plays, and Perry completed three passes on the drive while running for 35 yards.

It was Davis, LaGrange’s senior fullback, who capped the drive with his 2-yard scoring run.

The Blue Devils then went 75 yards for the touchdown, with Ja’Quan Mason scoring on a 4-yard run, and with 7:41 left in the game, LaGrange trailed 21-7.

It took the Grangers less than two minutes to find the end zone again.

Perry had a 26-yard run on the drive, and he also completed a 32-yard pass to Enrique Moody to set up Copeland’s scoring run.

After a Columbus punt, the Grangers looked like they were in business when Perry completed a 30-yard pass to Hardy, but the penalty negated that gain.

The Blue Devils picked up one first down when they got the ball back, and they punted with 17 seconds to play.

LaGrange ran two plays, and that was that.